Zeroing In? A New Senate Proposal Aims for Common Ground on Gun Safety 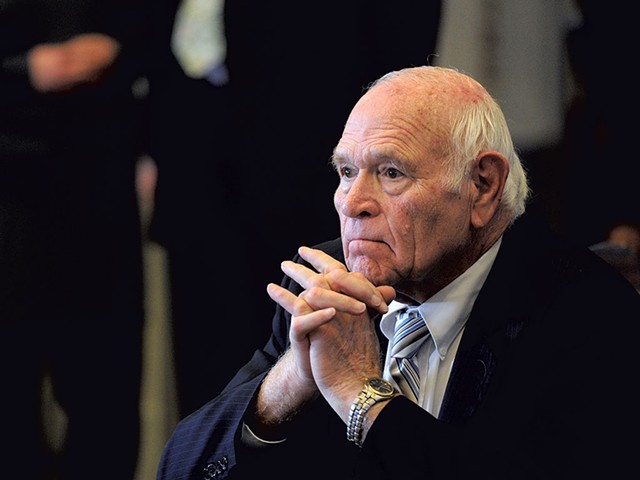 In late December 2012, Steven Davis, a Bennington math and science teacher, was seen putting a Bushmaster AR-15 semiautomatic rifle into his car. Concerned neighbors called the police, and officers went to Davis' home. Finding no evidence of a crime, they left without taking the rifle.

By the next day, according to the Bennington Banner, Davis had posted videos online criticizing the local teachers' union and making statements that led people to worry he might become violent. Davis' wife filed for a restraining order against him.

"I've studied military tactics, and this is the way to go," he said in one video. "It's all going to hit so hard, so fast and shut that school system down 'til they get things straight."

According to Bennington Police Chief Paul Doucette, members of the Mount Anthony Union High School community reported the videos soon after they were posted.

"We were getting inundated with telephone calls from schoolteachers because he was sending out emails," the chief told the Banner at the time. "It became disturbing to some people."

In response, police asked Davis to hand over his rifle. He surrendered the weapon voluntarily and allowed the cops to take him to a hospital for a mental health evaluation.

"That [incident] raised the issue of 'What if he said no?'" Sen. Dick Sears (D-Bennington) told colleagues on the Senate Judiciary Committee early this month. "Nothing you can do until he kills somebody."

To defuse such situations in the future, Sears, who chairs the committee, has introduced legislation to permit police to ask a judge for an "extreme risk protection order" allowing cops to confiscate a citizen's guns for up to a year. The proposal complements — or is an alternative to — a House-passed measure that would authorize police to seize guns immediately when they arrest or cite someone for domestic violence.

Both proposals take a narrower approach to reducing gun crimes than a far more controversial bill to require background checks for all firearms sales. Media coverage and advocacy efforts in Vermont have largely focused on that broader bill, which has never advanced beyond Sears' committee since it was first introduced five years ago. Its chances of passage this year don't look much better.

"The committee rejected it [in 2015] ... and the committee's still the same, so I don't think any minds have been changed there," Sears said of the background-checks bill.

It's possible, though not certain, that a limited focus on preventing domestic violence might boost the newer bills' chances of passage.

While they view the proposals from different vantage points, some gun rights supporters and some domestic violence advocates agree that targeting specific situations — not all gun owners — could increase safety without compromising gun rights.

Under current law, police can't seize guns except in very specific circumstances, such as when a gun is part of a criminal investigation or a court has issued a domestic violence restraining order. Sears said none of those things applied in the Bennington incident.

"Even though he had made these threats, even though he possessed a [high-powered rifle], there was no process" to protect the public, Sears said of Davis.

The House bill, which passed that chamber last March on a 78-60 vote, allows police to take guns for up to five days when someone is arrested or cited for domestic violence — immediately, without a court hearing.

That bill awaits a hearing in the Senate Judiciary Committee, and Sears has expressed concerns about it. He worries that the measure violates the Fourth Amendment's protections against unwarranted search and seizure, a concern gun rights advocates share.

"I want to do something that will stand constitutional muster, No. 1," Sears said. 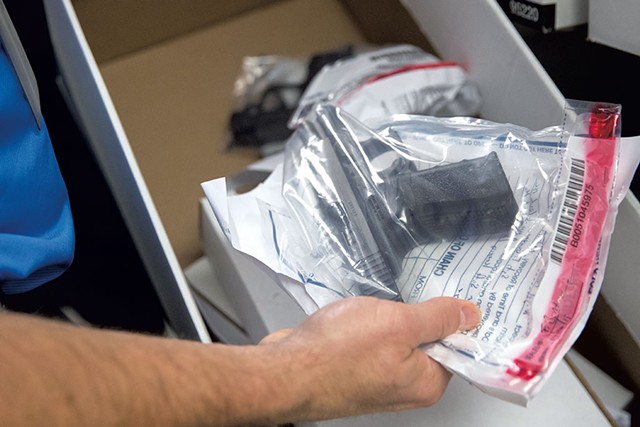 Despite his reservations about the House proposal, the Senate judiciary chair said he agrees that police should have expanded power to remove guns from certain potentially dangerous situations. He said his bill is an attempt to address that without violating gun owners' right to due process.

Unlike the House bill, Sears' proposal would require police officers to get a judge's permission to take away one's guns and prevent them from buying more for up to a year. Sears said it's important that gun owners have a chance to argue their cases in court before the government takes their firearms.

"This approach is something that I'm more comfortable with," Sears said. "Having a quick [court] process rather than just one police officer based upon a victim's statement or whatever."

His legislation is based on existing laws in Washington and Oregon, Sears said, bolstering his argument that it passes constitutional muster. Both states allow authorities to take guns away from people if a court rules that they are a threat to themselves or others.

Also improving the chances of Sears' bill is the fact that it has not provoked outright opposition from the Vermont Federation of Sportsmen's Clubs, the Vermont affiliate of the National Rifle Association. The federation has lobbied in the Statehouse for years against nearly every gun control proposal.

"Vermont doesn't need any new gun control laws," said federation president Chris Bradley. "There is no problem that needs to be solved here."

Bradley acknowledged that even if Vermont doesn't have a gun problem, "clearly there is a domestic violence issue." But he argued that the House-passed bill crosses a line because it allows police to take guns without a court order.

"The officer is now suddenly put in a position to be ... judge, jury and executioner," Bradley said. "That person can, in effect, take all firearms from the house."

While he did not endorse Sears' plan, he said the federation is "not opposed" and will be following the legislation closely.

"I think we can all agree that there are certain people in this world who should not have firearms," Bradley said. "I see [Sears' bill] as an attempt to, in a framework of due process, make that determination."

A second gun rights group disagrees. Ed Cutler, the president of Gun Owners of Vermont, said his organization opposes both the House and Senate bills. While Sears' legislation provides some due process, going to court will likely involve hefty legal expenses for gun owners, Cutler said.

"A judge can say anything ... He's generally going to go against the defendant because he wants to be sure that nothing is going to happen," he said. "So you need a lawyer. A lawyer to go to court on something like this is $2,000 to $3,000, minimum."

Cutler says his group's solution is simple: If someone is violent, they should be locked up. If they haven't done anything wrong yet, they should be allowed to keep their legally owned guns.

On the other side of the issue, organizations that advocate for victims of domestic violence worry about potential delays if a court hearing is required.

Auburn Watersong, associate director of public policy at the Vermont Network Against Domestic and Sexual Violence, said it's vital to give police the power to take guns away as they respond to an incident.

"That's because ... when that domestic violence situation in that household is brought out into public light, that is often the most dangerous time for a victim," she said. "And what we're trying to get at is not waiting until there is a court order in place."

Police, who would be responsible for seizing and storing guns if these bills pass, have practical concerns. Colchester Police Chief Jennifer Morrison said she and the cops she works with are fully on board with protecting victims of domestic violence or threats, but they are already dealing with too many guns.

"Disposing of firearms is one of the most difficult parts of managing our evidence and property rooms," said Morrison, who also serves as president of the Vermont Association of Chiefs of Police.

Under state law, officials need permission from the commissioner of public safety or the state treasurer in order to destroy or sell guns held by the government. According to Morrison, those officials have refused to give their permission for years, even when she proposed bringing in a private company that can strip guns for parts and then destroy them for free.

With no legal way for cops to get rid of the guns, they pile up.

Morrison said she's not opposed to either bill. She just wants to make sure lawmakers consider all of the consequences of their proposals.

"I'm really sticking to the practicalities of accounting for and safely storing [guns]," she said. "It takes some resources to do these things."

With three pieces of gun legislation before them, senators have scheduled a public hearing at the Statehouse on January 30. Gun rights, gun control and domestic violence advocacy groups have already started mobilizing their members to make the trip.

"We'll be attending by the thousands, hopefully," said Cutler. "Put it this way: The Statehouse will be full."

Asked whether any of the gun proposals are likely to pass through his committee, Sears said it's too soon to tell.

"I don't know what we'll do," he said. "Everything depends on what we hear at the public hearing."