Zero Tolerance: Judge's Decision Threatens the Use of DUI Evidence 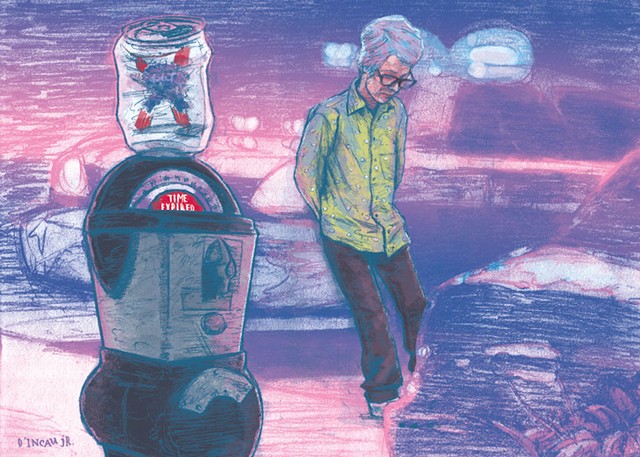 Driving under the influence is one of the most commonly prosecuted crimes in Vermont, with more than 3,000 charges filed per year. Some defense attorneys spend the bulk of their time fighting those DUI cases. Deputy state's attorneys use them to hone their prosecutorial skills.

A Northeast Kingdom judge's recent decision could change the rules that determine who wins and loses.

In April, Orleans County Judge Howard VanBenthuysen threw out blood-alcohol measurements in 25 DUI cases, saying the Vermont Forensic Laboratory calculated the defendants' blood-alcohol levels without a "scientifically reliable basis." His decision could jeopardize many DUI prosecutions, and it raises new questions about the state lab, which has struggled for years to comply with scientific standards in drunk-driving cases.

Drivers suspected of being intoxicated are put through a series of field sobriety tests — walking in a straight line, counting backward and, if they consent, breathing into a handheld breath-alcohol device. The measurement from that roadside apparatus, however, is inadmissible in court — it has been deemed imprecise. So drivers whose blood-alcohol concentrations measure more than 0.08 percent are transported to a police station to be tested on the more accurate DataMaster DMT machine.

Readings from those machines, which can be found in more than 60 police barracks across Vermont, are admissible in court. When drunk drivers are tested within two hours of a traffic stop, their blood-alcohol level from the DataMaster is automatically entered into evidence.

But for cases in which the driver was tested more than two hours after the traffic stop, experts use a formula to calculate a blood-alcohol level at the time of the offense. The process generates what is called "relation-back" evidence.

From a scientific perspective, the calculation is complicated. An individual's blood-alcohol level rises and falls at widely variable rates, depending on age, size, gender and a host of other factors. People metabolize different types of alcohol at different speeds.

If a person offers information about when they stopped drinking, the lab makes a second guesstimate — that their blood-alcohol level peaked 30 minutes after they last drained a glass. So, for example, a person whose blood-alcohol measured 0.08 at 1 a.m., but who told police they stopped drinking at midnight, would be assumed to have been even drunker — and over the legal limit — at 12:30 a.m.

Defense attorneys have long maintained that the science behind relation-back evidence is more complicated than the lab's workers describe. But the practice has withstood legal challenges for decades — until now.

In the past year, St. Johnsbury attorney David Sleigh bundled 25 DUI cases involving defendants accused of having blood-alcohol levels just over the 0.08 legal limit based on a test administered more than two hours after being pulled over. He filed challenges to all of the blood-alcohol level measurements and put state crime lab chemists on the stand. Under questioning, a lab official acknowledged the uncertainty of the relation-back formula.

In response to Sleigh and Judge VanBenthuysen, Vermont Forensics Lab chemist Amanda Bolduc testified as to why the lab does not offer a range of possible blood-alcohol levels.

"There would be an awful lot of numbers in your calculation, which would confuse a jury," Bolduc said.

Bolduc testified that the lab used 0.015 per hour as the standard alcohol-elimination rate, regardless of a person's physical characteristics, out of a sense of caution. The lab claimed that the 0.015 rate actually benefited most Vermonters; 95 percent of the general population eliminates alcohol much more quickly than 0.015 per hour, Bolduc said.

But just a few weeks later, at a hearing in another of the Orleans County cases, Bolduc backtracked. No evidence supports the 95 percent estimate, she said.

"So it's, if not apocryphal, at least anecdotal?" VanBenthuysen asked.

"OK," VanBenthuysen said. "So as you sit there today, you can't testify to what percentage of the general population is benefited by selecting this 0.015 elimination?" VanBenthuysen asked.

Soon afterward, VanBenthuysen deemed the blood-alcohol levels computed by the lab to be unreliable and therefore inadmissible as evidence.

"There appears to be no principled basis for the assumptions made," VanBenthuysen wrote in an April ruling. "The evidence in this case did not establish to a reasonable degree of scientific certainty why, when the research shows such a variation, Vermont has decided to adopt a hard-and-fast rule of 30 minutes to peak BAC ... We do not allow criminal defendants to be convicted based on evidence that is probably true."

In a recent interview, Sleigh put a more dramatic spin on it: "We showed the lab's science was shoddy at best and fraudulent at worst."

The decision is unprecedented in Vermont. According to VanBenthuysen's ruling, prosecutors could not introduce a definitive blood-alcohol measurement for DUI cases if the test was administered more than two hours after a suspected driver was pulled over. Rather, they would have to give a range that could include both legal and illegal blood-alcohol levels — introducing enough margin of error, defense attorneys say, to convince a jury that there is "reasonable doubt" and to find the defendant not guilty.

Vermont judges are not bound by the rulings of their peers; only Supreme Court decisions set binding precedents. But judges often defer to the opinions of their colleagues. Last week, Judge Robert Gerety, who presides in Caledonia and Essex counties, ordered new hearings on relation-back evidence.

Valerio said he expects defense attorneys across Vermont to use it as a basis to challenge evidence in DUI cases.

It is unclear how many cases could be affected if VanBenthuysen's ruling takes hold elsewhere in Vermont — lawyers estimate it could be as many as several hundred. Neither the judiciary nor the police track how many DUIs involve tests taken two hours after initial police contact.

Logic suggests it's more likely to happen in rural areas, where the nearest police station — and not all of them have DataMasters — may be a long drive away. The initial roadside test takes time, too.

In bad accidents, authorities usually treat the injured and clear the scene before testing the suspected driver.

Orleans County State's Attorney Jennifer Barrett said VanBenthuysen's ruling won't deter her. She plans to continue prosecuting pending DUI cases without the blood-alcohol readings and may appeal to the Vermont Supreme Court for clarity on the breath-test issue.

Barrett pointed to another recent ruling that went in the favor of prosecutors. Rutland Superior Court Judge Tom Zonay rejected Sleigh's argument that he should throw out relation-back evidence in a DUI case.

"The court simply cannot find that there is any unfair prejudice from the introduction of this evidence," Zonay wrote.

Sleigh is asking Zonay to reconsider his decision, based on VanBenthuysen's ruling. Ironically, the Rutland case involves a former Vermont State Police trooper, Eric Rademacher, who was accused of driving his police cruiser under the influence while on duty in April 2015.

Barrett said that, in many of the cases, she would be comfortable presenting to a jury the range of possible blood-alcohol levels. "This is a decision in one set of cases, and it doesn't really close the door to having the relation-back testimony," Barrett said. "We would just have to identify it differently."

Additionally, Barrett said, prosecutors could rely on other factors — a trooper testifying that a person had bloodshot eyes; cruiser camera footage showing the driver failing roadside tests — to obtain a conviction.

"In most DUIs, the breath test is like icing on the cake," said Greg Nagurney, a prosecutor who works for the Department of State's Attorneys and Sheriffs and assists in DUI cases across the state. "There's plenty of other information, [such as] erratic operation. A jury can make the common-sense assessment that someone was impaired, rather than rely on a machine."

But defense attorneys say that argument is dubious. Jurors have come to expect a precise blood-alcohol level and could be persuaded to acquit without the objective measuring stick, they argue.

"Without that easy way to prove it, it makes it more difficult, because you have to rely on things that are arguable," Valerio said. "It's hard for juries to argue with [scientific] experts."

Sleigh has been challenging the state lab since Bolduc and her former colleague Darcy Richardson came forward in 2011 with allegations that a technician had tampered with the DataMasters over a period of years to get them to "pass" routine performance tests. Numerous DUI cases were reduced or dismissed as a result of their claims, and the state shifted responsibility for the DataMasters from the Department of Health to the Department of Public Safety, which promised to get its breath-alcohol program accredited. Four years later, it had missed several deadlines to do so, as Seven Days reported in January 2015.

The lab has since achieved accreditation in all disciplines, save one — breath-alcohol testing. Courts across Vermont still accept that evidence, despite the lack of accreditation.

Now that, too, is under attack.

Separate from the recent ruling in Orleans County, Sleigh and other lawyers, including Franklin County defense attorney Bill Cristman, have challenged 30 other DUI cases, arguing that they should be dismissed because the lab isn't accredited.

Judges in Washington and Lamoille counties are still mulling those requests.