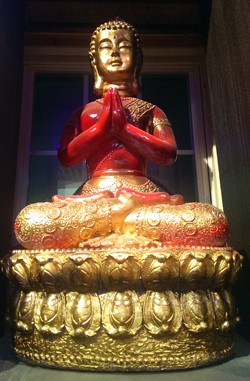 Burlington’s Lift lived and died as a pelvis-grinding nightclub. But the new bar and lounge to replace it will have a different vibe. Longtime event producer and DJ Robert Rapatski wants Zen Lounge to appeal to “the thirties-to-fifties crowd,” he says. “People working in the community can come enjoy a nice, relaxed place — enjoy a good drink, maybe a little bit of food and some music.”

Bamboo floors will be part of the club’s new Asian ambiance, which Rapatski says was partly inspired by Tao Nightclub in Las Vegas. Plans for the light food menu haven’t yet solidified, but Rapatski is considering having a chef roll sushi to order. Other possibilities include snacks such as edamame and miso or hot-and-sour soup.

Rapatski has worked with mixologist Bobby Chompupong, owner of Bangkok Bistro on the Hill, to create drinks suited to the Eastern theme that hit numerous flavor profiles, from sweet to spicy. Chompupong’s creative cocktails will include the Lotus, a combination of Stolichnaya Razberi and Chambord flavored with Thai basil, lemon and a splash of cranberry; and the Forbidden Fruit, made with plum sake, lime, vodka and passionfruit topped with Champagne.

For those who want to feel the heat, Chompupong created the Akuma, named for the Japanese demon. Ginger beer, silver tequila, fresh lime and chile powder go into the drink. Bottle service will include sake, wine and champagne.

On the weekends, Zen Lounge will open early in the evening for local, regional and name acts. Later, “high-energy dance music” will take over. Rapatski plans old-school mashups on Thursdays and foresees karaoke and salsa nights soon.

When it comes to the club’s décor, Rapatski says he wants to “let the mystique bubble a little,” but reveals that there will be Asian-style paintings on the walls and a giant Buddha behind the bar, along with a mosaic of broken mirrors. Locals can see for themselves at the opening, which Rapatski plans for right after Christmas, around December 27.

The original print version of this article was headlined "Eastern Promise"