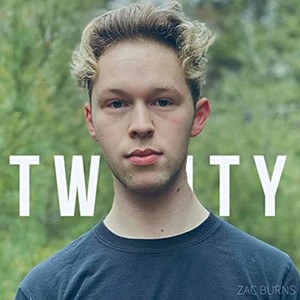 As I sit back in my chair and listen to Zac Burns' newest album, Twenty, there is a devil and an angel on my shoulders. On my left, it's that old curmudgeon George Bernard Shaw, croaking out his famous phrase, "Youth is wasted on the young." But before I start yelling at skateboarders or bitching about TikTok, Tyler, the Creator appears on my right, telling me, "Youth is something I never wanna take for granted."

I vacillate between these two modes so often while listening to Twenty that I feel as if I'm getting whiplash. Burns, a Jericho native who studies music production and technology at the Hartt School in Connecticut, recently turned 20. Like many an artist before him, Burns was inspired to document that especially poignant moment when childhood fades and the onrushing wave of adulthood looms ahead.

Opening track "20" sets the tone, with Burns warning the listener, "Don't close your eyes / life will pass you by." The music is restrained, a simple piano figure underpinning a tender melody. It carries a feeling of world-weariness and a sense of the clock running out. "It's just a fantasy when you're 20 / and you'll find you've been lost in yourself all this time," Burns sings.

The George Bernard Shaw on my shoulder becomes agitated whenever those sentiments pop up on the album — which is often. Burns has all but crafted a concept record about his exodus from his teenage years, assigning great import to the emotions that change brings.

On the other shoulder, Tyler, the Creator reminds me of how much incredible music was made by 20-year-olds writing about childhood's end. At the risk of being reductive to one of the great albums of the 20th century, Pink Floyd's The Dark Side of the Moon is basically Roger Waters freaking out as he realizes he isn't a kid anymore.

Musically, there's a maturity to Burns' writing that elevates the 20 tracks on Twenty. By and large, he dwells in the world of pop, with some light tendencies toward R&B. His compositions are clever and, in some cases, reach encouraging highs, such as on the tender ballad "What If I Could Call You Mine?"

The album could use a few more shifts of energy — 20 tracks is a long time for a listener to stay interested. Twenty is a reserved piece of music, more akin to a reverie than something one might dance to. But when Burns does drop a beat, the effect is telling — as on "Boston 2," which features the Gurkus Gang and pushes into hip-hop territory. The ennui that permeates the record fades, and a sense of youthful exuberance arises. Maybe Burns isn't totally ready to embrace the drudgery of adulthood.

It's a strong, polished album full of the philosophical musings of a boy transitioning into manhood. I'd love to hear Burns record Forty in a couple decades, then compare the two. For now, stream Twenty on Spotify or iTunes.