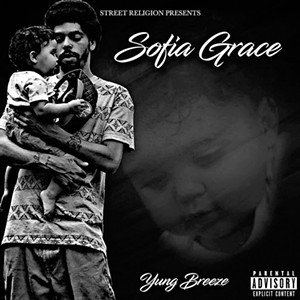 Yung Breeze is an MC and producer from Brattleboro with a hunger to match his growing rep. He is widely acclaimed, by both listeners and other artists, as one of the best rappers in Vermont. But those accolades mean very little to him: Breeze clearly intends his debut LP, Sofia Grace, as his ticket to bigger things.

As an artist, Breeze has always prided himself on his versatility, and he's an earnest student of the rap game. Through constant collaborations and more than a half dozen mixtapes, he's experimented with damn near every style and subgenre. That's all evident in his new album, a stylistic workout that spans from trap to club anthems to ... whatever drugs and EDM have warped modern R&B into.

Breeze's style is unmistakable and, at every turn, the artist puts his own stamp on things. His street raps aren't just authentic; they're so bitter you can feel the trauma through the speakers. His boasting and his sex raps are filthy in a self-deprecating way, reveling in cheap mistakes. And through it all, he remains a singularly charismatic leading man, as if directing his own movie.

"You know, I held a lot of shit in for this right here," he says in the album's intro. "Three years in the making."

Breeze was holed up all that time in the studio like Axl Rose. But he wasn't just agonizing over picking the perfect beats — he was making them. As his DonMarion alter ego, he self-produced much of the project and did a knockout job.

That intro, disarmingly titled "Fuck You," is a tsunami of personal frustration, with a flow set just ahead of the beat to add to the urgency. It's touches like these that make the album so consistently impressive. Breeze is more than a master rapper; he's a shrewd songwriter who knows how to put his creativity to work to enhance the track. The breaks, the changes, the ad libs — it's all about making the songs catchier and more compelling.

He takes the same careful approach with guest features. Fellow renaissance man THEN WHAt produces several standout cuts — and also contributes a killer verse on "Narcos" as Selfish Presley.

Although "Red Brick Road" is possibly Breeze's finest cut, there's no shortage of competition throughout the album. There's the brutal but catchy "Crackhouse," the woozy earworm "Sweeze," the hangover cinema of "My Misery" — this album is truly packed with potential singles.

And that was the goal. Breeze has crafted an undeniable debut LP with a ton of range and absolutely zero filler. He's proven himself not only as a rapper but also as an A&R rep and a producer. And Sofia Grace will surely stand as one of the finest local albums of the year.

Sofia Grace is available through all major streaming services.