A young man shot dead in Burlington last week began his life in a refugee camp in Kenya and went on to become the first member of his family to graduate high school and attend college.

Hussein Mubarak, 21, died at the University of Vermont Medical Center after he was shot in the head last Thursday evening on Luck Street, just steps from his family's apartment in the city's Old North End. Burlington police are still looking for the shooter, who they believe knew Mubarak and killed him for reasons they have not detailed.

"Hussein was a good, caring, loving person who was cared [for] and loved," his older sister, Hamara, said.

Mubarak's death marks the first homicide in Vermont's largest city in more than two years and is part of a recent spike in gunfire during the pandemic. He was killed just days after being released from federal prison, where he served a 10-month sentence on a drug conviction.

Police have identified "persons of interest" in the shooting but do not have information connecting it to Mubarak's recent conviction, Wade Labrecque, deputy chief of operations for the Burlington Police Department, said on Monday.

"There's nothing that we've turned up that would show it had anything to do with his incarceration," he said.

Mubarak's killing was the second shooting to affect his family this year. In February, someone fired at his parents' apartment on Riverside Avenue. Bullets struck the exterior walls and went through a window into a living area, where children were present, Burlington police said at the time.

No one has been arrested in that case, Labrecque said.

Mubarak was shot near a sidewalk just after 7:30 p.m. on a sunny summer evening, in the heart of the Burlington neighborhood where his New American family has made its home for more than 15 years after fleeing violence in Somalia. Around the corner is the Boys & Girls Club of Burlington, where many of the family's 10 children have spent time, and the popular Roosevelt Park, where neighborhood kids play basketball and other sports.

Police do not believe Mubarak's killing is related to a June incident near Roosevelt Park in which shrapnel from a gunshot hit a former city councilor in his backyard, causing minor injuries. No arrests have been made in that case, either, though Labrecque said the department has identified suspects.

Mubarak was well-known around the neighborhood — a smart, energetic, funny and athletic young man, his sister said. He played soccer at Burlington High School, and, in 2019, he received a scholarship for college-bound youth from the Boys & Girls Club. The family's third-oldest child, he then enrolled at Plymouth State University in New Hampshire.

More recently, Mubarak was going through what his sister described as a "rough patch." 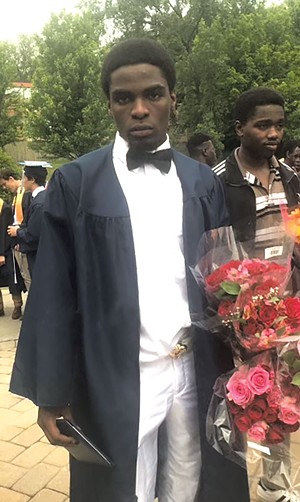 A court memo his public defender filed in May in connection with the federal case portrayed Mubarak as a young man who had worked hard and achieved great things despite hardship, trauma and experiences of racism. He got his first job at a supermarket during middle school to earn money for his family. But during his first semester in college, he picked up criminal charges that forced him to return to Burlington, where he was "aimless and frustrated" and "involved himself in the streets," according to the memo.

Last summer, he was charged in state court with burglarizing a South Prospect Street apartment; the Chittenden County State's Attorney's Office filed a petition to prosecute him as a youthful offender. Federal prosecutors, meanwhile, brought a separate charge of possessing cocaine with intent to distribute. While detained for that offense, Mubarak pleaded guilty. In exchange for accepting responsibility, prosecutors sought a 10-month sentence with credit for time served, which a judge imposed at a hearing in late May.

In court records, Mubarak's public defender stated that he wanted to pursue an associate's degree at Community College of Vermont following his release. Hamara said her brother was "wanting to start life all over again." She said she doesn't know who killed him or why.

"The whole neighborhood is in shock," she said. "We live in a good community where all of our neighbors are basically like family."

As of Monday, police were continuing to collect video and witness statements and had subpoenaed social media and cellphone records. Following a witness tip the night of the shooting, officers initially canvassed a wooded area north of the Old North End neighborhood using police dogs and a drone, but their search did not turn up any evidence.

Murders are rare in Burlington, and police in recent years have made arrests in every case. The most recent fatal shooting occurred in April 2020, when 38-year-old Steven Martin was killed after two men forced their way into his North Avenue home.

Mubarak's shooting was the 16th "gunfire incident" in Burlington this year, an informal category of crime that the department has begun using to denote instances in which guns are fired illegally. In many recent instances, no one was injured.

The tally in 2022 already exceeds the totals from each of the previous two years, when gunshots in the city started to spike, according to police. Burlington Mayor Miro Weinberger, acting Police Chief Jon Murad and Chittenden County State's Attorney Sarah George held a press conference last month to discuss the trend and promised to address it.

The figures are in line with a nationwide surge in gun violence stemming from social and economic stressors related to the pandemic. In 2020, U.S. homicides involving guns jumped 35 percent, pushing the rate to the highest level in more than 25 years, according to the U.S. Centers for Disease Control and Prevention. Vermont had at least two fatal shootings in June, in Springfield and Woodstock.

The majority of the gunfire incidents since 2020 in Burlington have not been in the Old North End, department data show, but the densely populated neighborhood has seen a large increase.

Labrecque said the department is concerned about the uptick in the Old North End. The department — which, like many other police departments, is struggling with staffing shortages — added patrols to the neighborhood last weekend "just so folks could see a police officer."

Hamara said she's long felt safe in the neighborhood, which seems to come together "like a family" in times of need. "Out of nowhere, it just started to get rough when COVID hit. That's when the gunshots started happening," she said.

In the wake of her brother's death, Hamara said her family is considering moving "somewhere fresh, to get away from all this violence."

In a social media post on Tuesday, Burlington City Councilor Ali Dieng (I-Ward 7), the city's only New American holding elected office, said Mubarak's killing should not be surprising given the recent number of gunfire incidents. Regardless, he wrote, it "must move us to action." Black and brown residents, Dieng continued, are caught between biased policing and community violence.

He said the city could help prevent shootings by better supporting vulnerable residents.

"Long before this shooting," the city councilor wrote, "there were probable opportunities to intervene and support this young person, his family and his community, that could have made a difference in this tragic trajectory."

"Gun violence must not be what New American boys grow up into in Burlington," he wrote.

A small memorial of flowers, letters and photos has been placed near the spot where Mubarak was killed. One of the notes, which calls for "justice for Hussein," said Hussein helped others even as he faced his own struggles.

As of Tuesday, about 470 people had donated to a crowdfunding campaign to offset funeral expenses for the family, which Hamara said has limited financial resources.

As Seven Days went to print on Tuesday evening, Mubarak's friends, family and neighbors were gathering in Roosevelt Park for a celebration of life and a candlelight vigil.

The original print version of this article was headlined "Fatal Encounter"