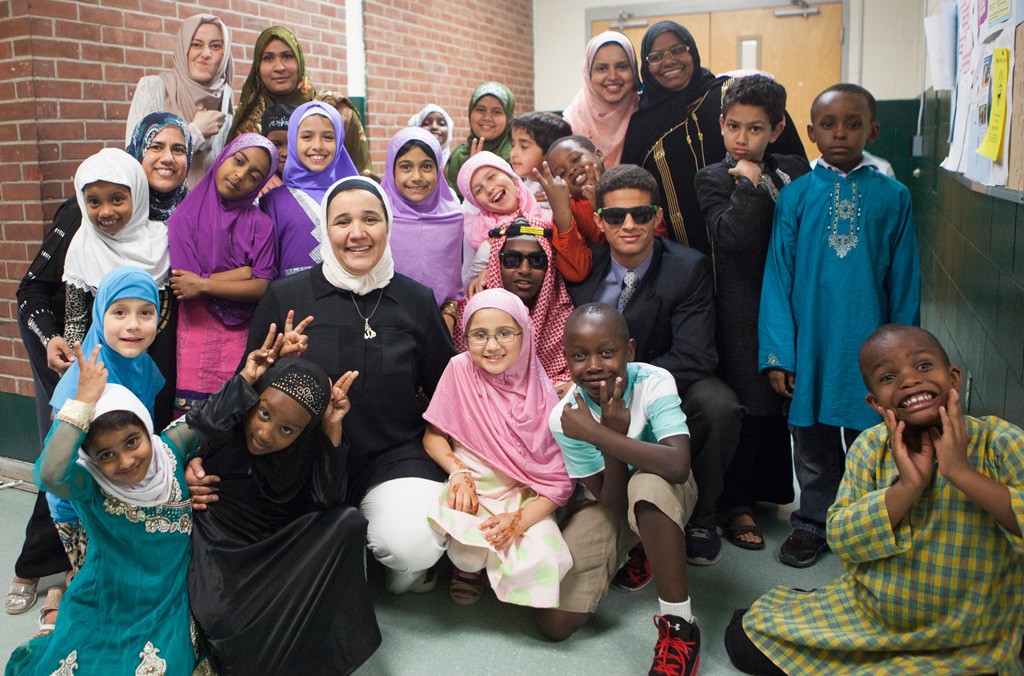 Fathima Bariyajaan strode across the stage to fix a hand-painted date tree. Then she paused to adjust the headscarf that rested on her shoulders. It was an hour before the Weekend Islamic School would hold its annual show at the Winooski Middle School auditorium to mark the end of its academic year. About 70 students ages 4 to 18 would perform songs, poems and skits based on themes and stories from the Quran.

While Bariyajaan and other stagehands checked the props one last time, the performers, helpers and teachers gathered at the cafeteria. Amid the sea of headscarves and shalwar kameez — the tunic-and-loose-trousers combination favored by women of South Asian descent — the black, sequined, flowing Middle Eastern dresses known as abayas, and the brightly colored, printed dresses, Linda Hasan stood out with her chocolate-brown trousers, pale blue blouse and curly hair. She kept a watchful eye on the kids running in various directions.

"It will come together; it's fine," Hasan said.

Bariyajaan and a group of parents established the Weekend Islamic School in 2006, with Bariyajaan as principal, because they were concerned that their American-born children would not receive a solid foundation in Islamic teachings. At first, owing to the limited supply of teachers, lessons were held for 10 to 15 students on Fridays, Saturdays and Sundays. Nine years later, the school has a 30-week curriculum for 125 students and enough instructors for classes to be held exclusively on Sundays. Each student pays about $200 per academic year. Teachers are paid about $40 each week.

Bariyajaan believes the key to the school's success is the professional nature of its management. That includes financial commitment from all stakeholders, even if it's a token sum. And she's not slowing down: "24-7, I think about my school," she said.

Minutes before the performance was scheduled to start, Bariyajaan and her team received bad news. The sound technician would not be able to make it to the show. The audience grew restless. They were accustomed to events starting later than scheduled — running on the infamous "Middle Eastern time" — but their patience was wearing thin.

Finally, the curtains parted to reveal a neat line of prekindergarten children, with three others standing on raised platforms near the date trees. Since their singing had been prerecorded, they took turns stepping out of the row to lip-sync their parts.

Feyza Basoglu beamed as she watched the performance, which she had choreographed, from the sidelines. The children were singing about the joy that early Muslims felt after Muhammad arrived in the city of Medina from Mecca, an event known as hijrah, or migration.

When Basoglu applied for a fellowship after completing her residency in Massachusetts, the first thing the Turkish-born child and adolescent psychiatrist did wasn't to research universities or faculty. Rather, she called up mosques in regions of interest and drilled them on their community's activities. Did they hold five daily prayers? Did the Islamic school have an organized curriculum? How big was the Muslim community?

In Massachusetts, the mother of two said she missed being part of a vibrant Muslim community: "I was deprived of it." She wanted her children to "feel that they are not the only [Muslims]" and to have "good role models."

A 2014 religious landscape study by the Pew Research Center showed that less than 1 percent of Vermont residents are Muslim. It is not uncommon for individuals and families of that faith to move to cities that contain a sizable Muslim community, as Basoglu did when she accepted a fellowship at the University of Vermont. Here, Muslims may seek proximity to the mosque in Colchester, which was established by the Islamic Society of Vermont in 1999.

Today, Basoglu teaches 4- and 5-year-olds at the Weekend Islamic School. She uses her professional skills and knowledge to encourage a fun, play-based approach to learning about Islam. A range of materials, including Nickelodeon's "Max & Ruby" videos, help her teach her class about Islamic values, such as sharing and telling the truth.

"We have to take an interest in contributing to the community," Basoglu said.

By that, she doesn't mean just the Muslim community. The Weekend Islamic School is a melting pot in terms of culture and religion.

Although her Iraq-born father was a Muslim, Linda Hasan was raised a Protestant. She started becoming interested in Islamic culture and heritage after the death of her father more than 15 years ago. Further spurred by 9/11, that interest extended to learning the Arabic language; today, Hasan volunteers at the school and teaches the younger children the Arabic alphabet and reading.

"I'm made to feel very welcomed," said Hasan, adding that she enjoys the interfaith and intercultural discussions at the Colchester mosque.

Back at Winooski Middle School, despite the technical difficulties, the show went on. The teenage girls asked the audience to guess the names of various prophets based on their distinctive traits. The younger children earned "good job" comments, though they struggled to remain in unison. The middle school students put on a skit not unlike A Christmas Carol, which revolved around the themes of keeping one's promise and chivalry. Two former students who are now teaching assistants served as MCs and hammed up the stereotypes of different Muslim communities.

The day's mood turned serious when Imam Islam Hassan, of the Colchester mosque, urged parents to take a greater interest in their children's Islamic education. He promised that the mosque would help the Weekend Islamic School overcome its challenges. Most pressing among those is a recent increase in the fee the school must pay for using the Winooski space. Three years ago, the mosque was deemed too small for the growing classes, so the school moved to public school buildings for the past two years. Last year, the Weekend Islamic School paid $500 total for the use of the facilities. This year, it had to pay $22 per hour, or $132 per week.

It's common for religious groups to rent the use of public schools, said Sean McMannon, superintendent of the Winooski School District. The nonprofit Anti-Defamation League states that such groups may only meet at public schools after hours, provided other outside organizations or clubs may meet at the same time. All such groups must pay a custodial fee, McMannon explained, which they can split with other organizations holding events at the same time. When only one group is using the space, as with the Weekend Islamic School, it has to foot the entire bill.

Bariyajaan said she has thus far avoided asking the mosque for help, because it has been fundraising for its own expansion plan. But she hopes to gain support from the mosque for the coming academic year, especially now that Imam Hassan is teaching teenage boys at the Weekend Islamic School.

"Whatever my goal, I will make it happen," Bariyajaan said. "I treat the school like it's my family."