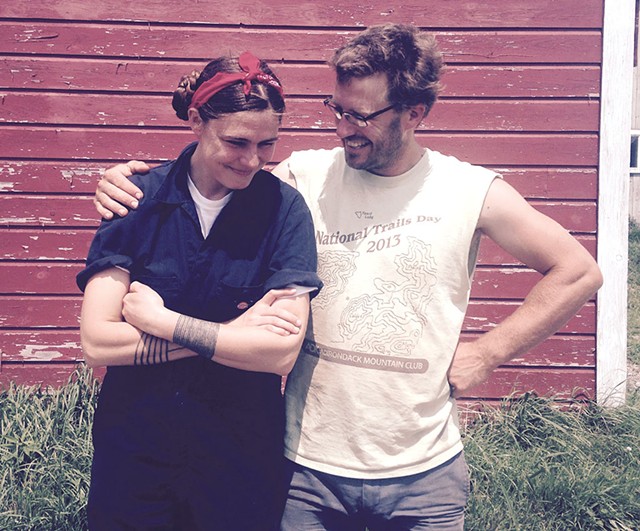 Mace Chasm Farm sits in tiny Keeseville, N.Y., near the rugged shore of Lake Champlain and the foothills of the Adirondack Mountains. Surrounded by orchards, woods and pasture, the 125-acre livestock farm is a beautiful spot. That's a good thing, since the young couple that owns the farm doesn't vacation and works six and a half days a week.

Courtney Grimes-Sutton and her husband, Asa Thomas-Train, both in their early thirties, bought the farm just south of Plattsburgh four years ago. They met on another farm and first locked eyes when she was gutting a pig. Both look the part of hip, healthy back-to-the-landers: She has piercing blue eyes, chestnut braids and bracelet-style tattoos; he has strawberry-blond hair and brawny biceps.

The couple's passion for living on the land and raising animals makes the long hours of farming more than tolerable, they said. "I just feel really engaged by it all year," said Grimes-Sutton. "And because there's that variety, I don't feel like I need a vacation."

Grimes-Sutton, from Massachusetts, dabbled in welding and roamed as far as a ginger farm in Australia before she decided to start a farm of her own. Thomas-Train grew up hiking and skiing in the Keene Valley and studied geography and art at Middlebury College. These days he doesn't have time to paint, at least on canvas. "I definitely think about the farm as one big art and geography project," he said. "A 125-acre painting."

The two are part of the young farmer boomlet in Essex County. While Vermont's farm economy has blossomed, giving birth to small-scale veggie growers, artisan cheese makers, grass-fed beef operations and organic dairies, a similar trend is taking root in and around the vast Adirondack Park.

Overall, the Park is no model of growth: The population is sparse, and restrictions on development limit the size of the economy and the number of year-round customers. While tourism is important to the region, it's dependent on weather and economic conditions.

Farming in the area, however, comes with one big plus: Land in Essex County is cheap, at least by comparison with the Green Mountain State. Vermont farm property runs about $3,300 an acre, compared with $3,000 an acre in New York, according to U.S. Department of Agriculture statistics. 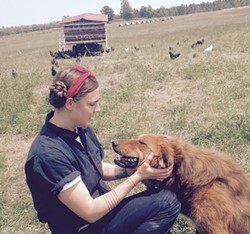 Those numbers are averages, moreover, and don't reflect some of the deals that can be found. The Mace Chasm farmsteaders got one of those deals on their house, barns and 125 acres, then immediately sold the development rights to a conservation group. Examples like these have helped attract startup farmers who sell baby lettuce and locally raised bacon via CSAs in a region that was once more known for large, traditional dairy farms.

"The land is a lot cheaper," confirmed Ashlee Kleinhammer, co-owner of North Country Creamery in Keeseville, just up the road from Mace Chasm Farm. She and her partner, Steven Googin, briefly considered buying land in Vermont. But they found the options expensive and the state already saturated with artisan cheese makers. So, four years ago, Kleinhammer and Googin signed a lease-to-buy contract on their 112-acre farm and started producing raw milk, yogurt and half a dozen cheeses, from Camembert to Gouda.

Land is the fundamental ingredient of farming, and there's no question that the western side of Lake Champlain offers bargains, said Chris Boget. He's the executive director of the Lake Champlain Land Trust, which helps farmers conserve property in Vermont and New York.

Keeseville is perhaps best known for Ausable Chasm, a gushing sandstone gorge — called the "Grand Canyon of the Adirondacks" — that attracts thousands of tourists annually. But the landscape around the chasm is quiet and rural, with very little tourist ticky-tack. At least four small farms have cropped up on Mace Chasm Road alone, as has the thriving Ausable Brewing Company, opened in 2014 by Dan and Dylan Badger. Cyclists who take the ferry from Burlington to Port Kent, N.Y., can ride up the hill to check out the products, from local frozen yogurt to sausage to ale.

Collaborations are proliferating in this tiny farm belt. Hundreds of people show up for taco night at Ausable Brewing, which features Mace Chasm grass-fed beef; other local farms, such as Fledging Crow Vegetables, also sell to the Badger brothers.

Partnering with local farmers is a hallmark of the brewery, said Dan Badger. "It adds legitimacy to what we're trying to do," he added. "We've really immersed ourselves in the local agriculture movement on purpose."

Badger sees the current number of young farmers in Keeseville as just right, and doesn't particularly want the secret to get out to more farmers — or brewers.

"We're not really trying to encourage people to flock here right now," he said last week as he raked up grass clippings around the brewery's open-air pavilion. "It's nice [that] it is not so saturated."

Quite a few of the young farmers in Keeseville got their start at the organic, horse-powered Essex Farm about a 25-minute drive to the south. It's a seedbed for the sustainable agriculture movement and the setting of the 2011 book The Dirty Life: On Farming, Food and Love by Kristin Kimball, who co-owns the farm with her husband, Mark. In the memoir, she tells of her transformation from urban dweller to farmer in the cold, beautiful North Country.

Kimball's book has helped inspire others to undertake a certain kind of farm life, as have two documentaries about farming in the Adirondack region, Three Farms and Small Farm Rising. The spin-off Essex Farm Institute harnesses that momentum with classes and trainings on organic farming and marketing. An Essex processing warehouse called the Hub on the Hill gives growers a place to make jellies, pickles, sauces and other products. Grants and financing for young farmers hoping to get started in the region come from conservation groups such as the New York City-based Open Space Institute.

Kimball's book stimulated a new interest in local farming, said Laurie Davis, coordinator of the nonprofit Adirondack Harvest, which promotes direct-market farming in the region. "It was pretty widely read, and people really got intrigued."

Essex Farm has successfully recruited many young people to work on its farm crews; when those energetic workers stay around, they, too, play a role in boosting the farm economy. Davis, who with her husband paid $60,000 for their 27-acre veggie farm in Willsboro in 1993, now farms only part time, but she has watched the small-farm movement grow. She recalls how surprised some of the old-timers were when young, starry-eyed workers showed up to plant broccoli and harvest scallions at Essex Farm.

"I remember hearing older farmers in the region saying they just could not believe it; they had a hard time finding one farmhand to help them milk their cows," Davis said.

Back at Mace Chasm Farm, the days start at about 6:30 a.m. The young owners have breakfast in their 1840s red brick home and walk through the mud room — featuring an enormous collection of heavily worn farm boots — out to the farm yard.

Last Wednesday, a new flock of tiny yellow turkey poults had just arrived, and Thomas-Train was constructing their wooden pen. Sides of pork from pigs raised on the property sat on a stainless steel counter in the farm's small, immaculate retail butcher shop, where two employees sliced the meat into roasts and chops. There were chickens to slaughter, sausages to make and pregnant cows to check on. Out in the fields, the sheep and cattle grazed, the meat chickens hid in the shade, and one of the farm's three guardian dogs, Slash, came over for a cuddle when Grimes-Sutton called.

The three big dogs, all bred for farm sentry duty, sleep outside with the animals and ward off the neighborhood coyotes, bobcats and bears who might otherwise hop the electric fences for a midnight snack. "All night long our dogs are barking here," Grimes-Sutton noted. "We have a huge population of coyotes."

New projects are on the horizon: The Mace Chasm farmers recently won a $50,000 new-farmer grant from the State of New York. They plan to expand the butcher shop (a former garage) and build a smokehouse. The more the couple can diversify their products, the better, they say. Right now, Thomas-Train and Grimes-Sutton sell from the butcher shop, at four local farmers markets, and to a worksite CSA at Champlain Valley Physicians Hospital (UVM Health Network — CVPH) in Plattsburgh. They'd like to develop more CSAs and grow the market for the on-farm shop.

The farmers acknowledge that there are challenges to doing business in the Adirondacks: cell service and internet access are spotty or nonexistent in the Park, and even with the skiing in Lake Placid, the winters can be slow. "The reason land is cheap here is, nothing is easy about living here," Grimes-Sutton said.

As on farms everywhere, each day brings Mace Chasm a new challenge: a problem with the animals, a fix required on the equipment, another marketing question to resolve. The couple describes their lifestyle as a nonstop exercise in self-reliance and problem solving. "It's just constant triage, reprioritization," Grimes-Sutton said. "It just requires a lot of resourcefulness."

The original print version of this article was headlined "Plowing Ahead"