Excerpts From Young Vermonters: Not An Endangered Species

The numbers are stark: Vermont is graying. The 2000 U.S. Census revealed that the Green Mountain State had a larger percentage of fiftysomethings — and a smaller percentage of people in their mid- to late twenties — than any other in the Union. (According to 2009 census estimates, 14.5 percent of Vermonters are 65 or older.) Concerned about those stats, former Gov. Jim Douglas poured funds into a program designed to lure young professionals and their tax dollars back. Last year, some twenty- and thirtysomethings realized that their crucial, contested role in the state’s future could give them political clout. They got organized in groups such as Vermont Young Professionals, as Andy Bromage reported in Seven Days last fall.

Are young Vermonters really an “endangered species”? Writer Joe Sherman decided to find out by interviewing 20 Vermonters ages 21 to 38. Not all are “young professionals” — Sherman’s subjects run the gamut from musician Grace Potter to a Burlington construction worker. They do, however, offer fresh perspectives on our state — what keeps them here, and what they could do without.

Here are excerpts from three of Sherman’s interviews, accompanied by Martina Tesarová’s photos.

Erik Hoekstra’s interest in the built landscape began at a young age, grew at the University of Wisconsin, then expanded when he worked briefly in New York City. He saw the World Trade Center towers come down at close range; soon after, he moved to Vermont.

[After 9/11] it was a bad, bad year. And it didn’t look like things were going to pick up in the real near future. I had a friend up in Vermont, and I had visited a few times. I was really attracted to Burlington. It reminded me a lot of Madison, where I went to school … My friend offered me her couch for the ski season, and I quit my job and came up to Vermont with very little money and no plan. … In the fall of 2002 I was offered a position at a statewide nonprofit called Housing Vermont, right here in Burlington. 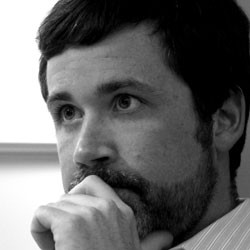 Joe Sherman: What about your personal experience in Vermont over the last decade? Have you had a high point, a low point?

EH: …I guess one, in a series of high points, is when I bought my house in the Old North End in early 2002. It’s a Burlington classic, a single-family home chopped into two units. I’ve lived on the first floor and had different tenants over the last six years upstairs.

Everybody I talked to told me, “You don’t wanna live in the Old North End. That’s the bad part of the town; there’s a lot of crime, it’s rough.” [laughs]…

JS: Do you feel a little guilty being a force of gentrification?

EH: I get asked that question a lot. For any neighborhood or community to be healthy, you have to have a good mix. It can’t be all low-income people. A nice thing about the Old North End is that the Champlain Housing Trust has been active for 25 years, and there’s a tremendous amount of good, affordable housing that will always be affordable housing. My street’s good, and it just keeps getting better. With the exception of the drinking, screaming derelicts, nobody’s been pushed out from the neighborhood. Everybody else on the street — there are a lot of people on our street that have been there for 50 years, 20, 30 years — they’re good, hard-working people. They’ve been good folks to have around.

JS: Who makes up your community?

EH: When I first moved here, I spent a lot of time hanging out with the radical rebels. But over the years I’ve gravitated to a group of friends that are more young professional types. For the last few years in the summertime I’ve played kickball with a big group of folks here in Burlington. … We’re the only neighborhood-based team. We call it the Old North End Ballers.

JS: What would you like to see happen in Vermont in the next few years?

EH: One thing … is the brain drain and the loss of young people in a rapidly aging population where we have an ever-depleting work force. I’d love to see Vermont really figure out how to begin to tackle those problems…

JS: Can you briefly summarize your last 10 years in Vermont? Have you become who you hoped to become?

EH: I’m certainly not where I thought I’d be when I was 22 years old. Moving to Vermont, everything that I’d thought that I’d do as a professional, and as an adult, changed. … I’ve got incredibly hands-on experience that you typically don’t get as a twentysomething or thirtysomething young professional. You usually pigeonhole into a very focused area where you don’t see the big picture. I’ve really had the opportunity to work more like an owner. I’ve got my hands in a little bit of everything. And it’s been a cool experience.

[Pauses a minute.] On Friday, I got the letter saying I was accepted into a master’s program in real estate development at Columbia. My girlfriend and I are planning to move down to New York. … I don’t know what I’m gonna do after grad school. Coming back to Vermont, to Burlington, is definitely a possibility. … I’m not selling my house. I have a lot of connections and ties here that are not going away. 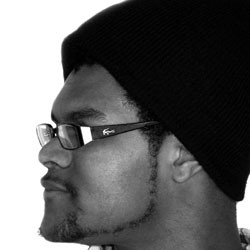 Communications and sociology from Dean College

Black, 6-foot-4, 250 pounds, Davon Martin is not your typical young Vermonter. He wasn’t born here and may not remain here, because of racial profiling and limited opportunities. Yet he loves the place, he tells me, when we talk in a brick house in the city’s Old North End.

Joe Sherman: When did you first come to Vermont?

DAVON MARTIN: I moved to Vermont in 1996, after living in Ohio for a while.

JS: Do you think opportunities will be good for you in Vermont?

DM: For me, personally, not really. I think it’s, like, a 25 percent chance for me to, like, find a career in Vermont and really hone my skills at it. Because it seems like you need to leave Vermont, get a career, save money and then move back. It’s kind of like you got to wait for the jobs to be created in Burlington for you to have your chance. … I’d love to live in Vermont. It’s more of a relaxing place and the place I’d want to raise my kids, if I ever have them.

JS: If you leave the state, where would you go?

DM: Out west. Houston. A bunch of opportunities in Texas. Ain’t just big for steak. Got opportunities. Lot of people make money out there.

JS: If you had the power to change something in Vermont, what would it be?

DM: I’d like to see more diversity — not just cultural and ethnic diversity; I’d like to see social-class diversity the most. It seems in Burlington the small person is not heard that much. It seems like people up on the hill make all the rules and the decisions. Even though it is starting to get different, because this side of town, [the Old North End] is cheaper, and a lot of middle-class people are moving to this side of town. So you’re getting a little more influence, but not from the lower class.

I’d like to see police officers get more aware of their own personal attitudes. I think every police officer should have to do a racial profiling class every two to five years — not just one — to become a police. If there’s somebody doing crime, get them. Don’t just constantly profile people. Too many times — last summer, for instance — the police officers took pictures of us. Every time we’re out there, at 4:30, on the basketball court. Fifteen minutes later a police officer is right there, watching us play basketball … What for? Is it because black people congregate at Pomeroy Park in the summer? Is it that thing of evoking the fear in people that something is going to go on? Man… 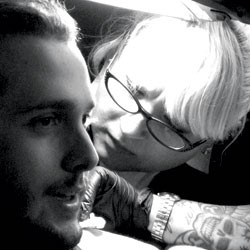 Lila Rees’ tattoo shop in downtown Barre is in a former clothing store with a 1950s look, an elevated service area and a work zone that suggests a dentist’s space, complete with drills.

JOE SHERMAN: Where were you when the decade began? What were you doing?

LILA REES: I remember when the year 2000 came and everybody was afraid about Y2K. I was in Boston. I was 19. I had to get out of there. I had this weird feeling. I was selling makeup, and I was starting to look into funeral home directing. I was really intrigued with it, doing makeup, because I was a makeup artist. I said to my mom that summer, “Mom, when you die, can I do your makeup?” Like, kidding! And she’s, like, “Oh, yeah!” And she, like, died three months later.

I had to go back to Vermont. I packed my shit in a U-Haul; I drove back home. At the same time they had a job opening at Filene’s [in Burlington]. It was a pretty good job for somebody 20. I did the interview and nailed the job. I got settled in and I sort of reconciled my relationship with my mom, which was really bad for a long time. And all of a sudden, she just died at 46 years old.

She had Graves’ disease. It’s a thyroid condition.

I did do her makeup before the funeral. In the 20 years they’d been open, no one had ever done that before at the funeral home. My family was standing there, totally in shock. I can’t believe I did it. I don’t know ... it was kind of cool. We’d already talked about it, which was sort of creepy. I didn’t think she was going to die.

I had a real bad relationship with my mom. I always said, “Never get a mom tattoo; I hate my mom.” Well, the next day after she died, I was, like, I’m going to get a mom tattoo. I went to Body Art and that’s where I met Tyree. I kept getting tattooed by Tyree. After a couple years, he offered me an apprenticeship. I didn’t think I could tattoo. He said, “You want to learn?” And I said, “No.” [laughs] I told him no! Then I started thinking about it, and I’m, like, I watch all these people come in with portfolios and artwork, begging for an apprenticeship. I might as well try it. What is the worst that is going to happen?

For me, everything sort of happened the way it was supposed to for 10 years. It all sort of worked out.

Young Vermonters: Not an Endangered Species is available for $15.95 at Phoenix Books in Essex and Bear Pond Books in Montpelier and Stowe, or through joesherman.com.