Young Activists Gear Up for a Hot "Climate Summer" 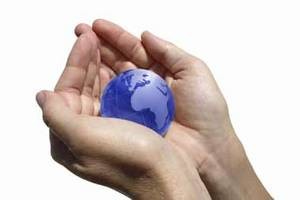 NEW HAMPSHIRE - Middlebury College has again staked out a vanguard position in a broad student movement against global warming.

First it launched "Step It Up," a nationwide protest in April demanding an 80 percent cut by 2050 in the emissions causing climate change. And Middlebury now accounts for 17 of the 25 young organizers working in New Hampshire, site of the first presidential primary, to focus candidates', journalists' and voters' attention on the planet's plight.

The Granite State initiative is part of the "Climate Summer" project sponsored by the Sierra Student Coalition, an arm of the Sierra Club. A year ago, the Coalition hatched the idea of taking advantage of the national media presence in New Hampshire to popularize a campaign to "transform society," says Jared Duval, the organization's national coordinator.

Organizers were inspired by the example of Freedom Summer, Duval adds. In 1964, hundreds of students, mainly from universities in the Northeast, traveled to Mississippi to help enfranchise black voters.

Today, activists on the ground in New Hampshire are recruiting hundreds of students around the country to take part in a series of agitations, beginning with a "red-white-and-green" Fourth of July parade in Amherst, N.H. Next will be "Climb It for the Climate," a coordinated July 14 ascent of the eight mountain peaks in the state named for U.S. presidents. Messages will be transmitted from the summits via both old media (painted banners) and new (podcasts).

Climate Summer climaxes with a four-day march across southern New Hampshire en route to an August 5 rally at the state capitol in Concord. "We're hoping to draw several thousand people to the statehouse lawn," says Middlebury College junior Sierra Murdoch, who's spending her summer as a full-time volunteer in New Hampshire.

"This really is the issue of my generation," Murdoch declares. "And we want to show this will be the student movement of our generation."

But will the public and the pols heed the warnings sounded during Climate Summer?

"It's not going to be automatic," says Middlebury College economics professor Jon Isham. Many interest groups with diverse agendas will be competing for the spotlight in New Hampshire, he notes.

Detractors will be making noise as well. Some can be expected to level criticisms like those fired off by Garret Keizer, a Northeast Kingdom writer who ridiculed Midd-Kid eco-activists in an essay in the June edition of Harper's magazine. Commenting on their campaign in support of wind-farm development in the Kingdom, Keizer wrote: "The intestinal tipping point came for me when a contingent of students from Middlebury College (annual tuition and fees $44,330) found both gas money and the gall to drive to the town of Sheffield (annual per capita income $13,277) in order to lecture the provincials on their responsibility to the earth and its myriad creatures."

Keizer said in an interview this week that it's not his intention to question the validity of environmental concerns or to denigrate Middlebury students' efforts to address them. The key point, he clarifies, is that an awareness of economic inequity must be included in the movement against global warming if it is to be effective.

To Duval, what matters most is not Middlebury students' privileged status but how they choose to live their lives. "We should be a lot more upset with students at a place like Middlebury College who go to work for a corporate law firm or for Exxon-Mobil," he suggests.

Charges of elitism and carpetbagging were also aimed at the students taking part in Freedom Summer. But that racial justice initiative 43 years ago had a catalyzing effect on the Civil Rights movement, which eventually achieved many of its goals. Isham sees similarities between the two student mobilizations for social change, but he detects differences, too: "Back then, it was pretty clear who the wrongdoers were and who had wrongs being done to them. This time, we're all wrongdoers. It's wrong to completely excoriate Exxon-Mobil when we're all using their gas."

Although he's a lower-wattage global-warming celebrity than fellow Middlebury College scholar Bill McKibben, Isham is also credited with helping propel the school into its leadership role on this red-hot issue. Jamie Henn, a recent Middlebury grad taking part in Climate Summer, says it was Isham's 2005 course "Building the Climate Movement" that encouraged him and other students to dedicate themselves to the cause.

Middlebury has since emerged as the center of a movement that may one day be viewed as historic. Duval says, "Middlebury has the most vibrant community in terms of the depth and breadth of involvement in this issue of any campus I'm aware of."

"People are starting to compare Middlebury College to Berkeley in the '60s," Henn says. "I don't know about that. We haven't torn the campus apart, but we did make it carbon-neutral."