You, Me and the Void: A Millennial Valentine's Lament | Essay | Seven Days | Vermont's Independent Voice

You, Me and the Void: A Millennial Valentine's Lament 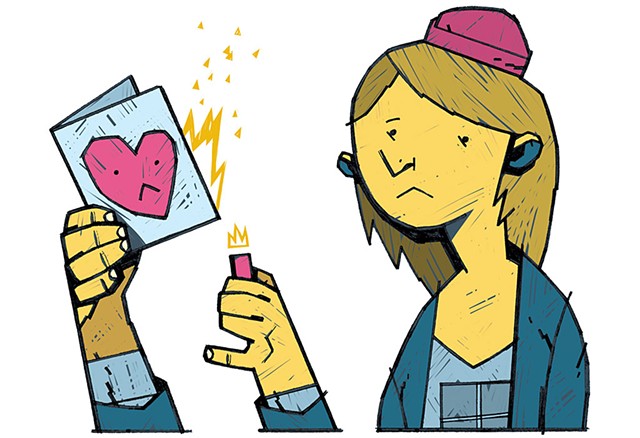 I hate to break it to you, babe, but as stoked as I was to indulge in our Valentine's Day tradition of spending a modest fortune on legume-forward small plates, I don't have it in me this year to pretend that we're not irrevocably screwed.

The Senate acquitted Trump, the temperature reached 65 degrees in Antarctica last week, and one of Oprah's favorite things of 2019 was an emergency survival backpack that costs more than the current trade-in value of my station wagon. Also, I just listened to a podcast about how we might be living in a computer simulation run by aliens. On top of everything, I'm still processing the fact that Mr. Peanut died last month at the age of 104, then came back as a baby peanut. I can't explain why, but that destabilized me to my core.

What is Valentine's Day, anyway, other than a culturally enforced bonanza of glucose and heteronormativity that greases the wheels of capitalism? Didn't we all suffer enough in elementary school, when our teachers shamed us into making cards for everyone in the class, even the kids who blew spitballs at us, and then gave us candy that turned to ash in our mouths? Why, in 2020, are we still doing this to ourselves?

Given the mounting evidence that we're careening toward Armageddon, I think we should refrain from all consumerism-inflected expressions of romance. Please do not get me an expensive moisturizer that smells like an exploded apothecary or a life-size cardboard cutout of Lily Tomlin or an Intervale CSA share or a yearlong subscription to the Criterion Channel. Buy me none of those things for Valentine's Day; in fact, never buy me anything again, except maybe that Lily Tomlin cardboard cutout, which would really enhance the corner of our living room with the Swiss cheese plant.

The general situation seems hopeless, but my somatic therapist said something to me the other day that really shifted my perspective: Who says facing the prospect of civilization collapse has to mean surrendering in despair? So that got me thinking — what if we spent this Hallmark holiday embracing the apocalypse in the most sensuous manner possible? As a sexy prelude, we could dim the lights to save electricity, put on an algorithmically generated Spotify playlist of our favorite ambient indie-electro-folk-pop-rock songs and gently merge with the Void.

You know, I've been thinking about the Void a lot lately. I'm pretty sure I've figured out what it is: It's the weird sensation you feel in your diaphragm when you scroll through your Instagram feed until you get a notification that says you've seen every post from the last two days, and then you compulsively swipe to refresh, but nothing happens.

The lack of stimuli transmogrifies you into a wastrel, so thirsty for content that you start clicking on ads for factory-direct underwear or anything that promises to dispel your existential dread. Which is how I ended up purchasing a biodegradable vegan deodorant that is, admittedly, not working for me.

Anyway, rather than get you some shitty chocolate as a bulwark against my own emptiness, I decided to weave you a cilice from those hair tumbleweeds that accumulate behind the bathroom sink. I think it will look particularly cute with the acid-washed 501s you got from that grief doula on Sensi-Babeington in exchange for your sourdough starter. Also, it was a good opportunity to practice my homesteading skills.

How, you might ask, will this night of Zillowing be any different from our standard pre-bedtime ritual of joyless online real estate perusal? For one thing, we're going to be radically intentional: Instead of staring at our individual iPhones, we'll bask in the glow of the same screen. For another, "The Bachelor" won't be playing in the background, liquefying our brains into serotonin jelly, so we can fully concentrate on assembling a wish list of unattainable properties.

I know, I know — we have no savings and approximately half a million dollars in student debt between us. But if we start setting up camp now, our squatters' rights should kick in by the time civilization collapses, at which point money will be completely worthless anyway.

Wait — babe, look at this! A 250-square-foot post-and-beam shed on 30 acres in Richmond for half of what we're paying in Burlington! The listing says it's on an industrial cricket farm, so we'd probably need to invest in noise-canceling headphones for when the chirping gets too loud. Also, there's no insulation, which is a bummer, but the shed is on an open hilltop, so we'd have a sick view of the vast, indifferent cosmos, with its promise of sweet release from the hellishness of modern existence.

Sorry, did I say that out loud? I meant that we could contemplate our relative puniness in the grand scheme of the universe, and everything would be slightly less terrible, because at least we'd be tiny specks of stardust together.

The original print version of this article was headlined "You, Me and the Void | A millennial Valentine's Day starter pack"