Yes, a Zebra Roams in Vermont 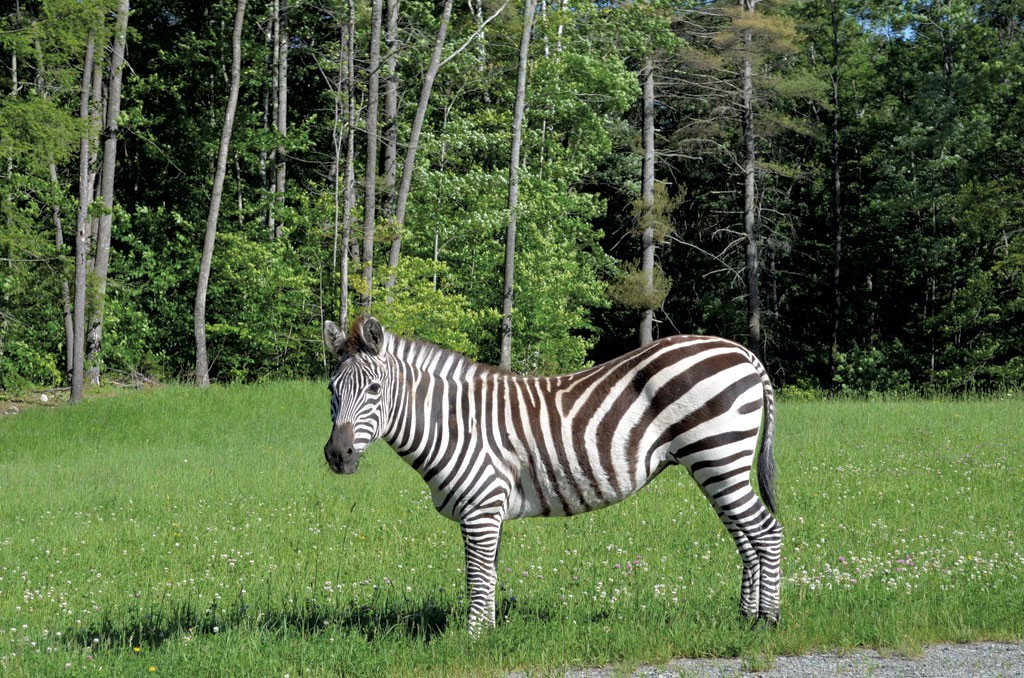 Every day, when she gets home from work, Deborah Osgood crosses a covered bridge and heads up to the barn to let her livestock out to graze. A pair of white ducks huddle by the pond; two dogs mill around nearby. Two bunnies and six cats are missing in action.

Up at the barn, Osgood goes stall to stall, lifting the latches. Out trot two miniature goats, a brown and white donkey, an Appaloosa pony and a black and white ... zebra.

His vivid stripes look comically incongruent against the green pasture, bucolic barn and covered bridge. Yet he nibbles clover alongside the others, quite at home southeast of Rutland. Osgood and her husband, Kevin, bought their house, off Route 106 in Reading, in 1978. They own a welding company and have three daughters who have settled nearby.

It's normal for children to pester their parents for a kitten or puppy, but in the Osgood household, Deborah was the one pleading — for a much more impractical animal.

Sitting at her kitchen table inside the cedar-planked house, she offers the simplest possible explanation. "I've always liked zebras." 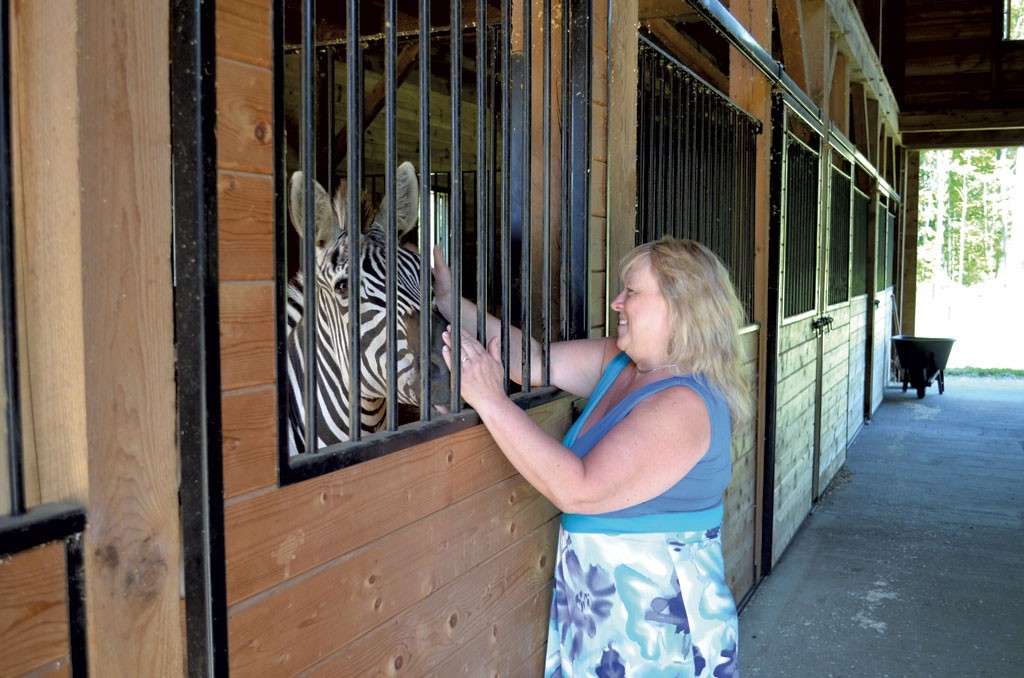 Zebra stuffed animals line the kitchen windows, zebra-striped rain boots sit by the door. She's wearing a cerulean floral sundress, but Osgood assures there are plenty of zebra-print items in her wardrobe.

About a decade ago, the Osgoods purchased the land across the road from their house, which gave them about 300 acres. "And I said to my husband, 'Now I can have my zebra.'" Deborah recalls. Which, she adds, "was a joke at the time."

But as they cleared the land, she began researching zebra breeders and found what looked like a reputable ranch in Ramona, Calif. According to its website, Spots N Stripes' "main purpose" is zebra research, but it also sells zebras and horses and runs training camps for prospective owners.

Her husband was agreeable. "He thought I was crazy, but he said, 'Whatever.'" Osgood's daughters — the youngest was about 10 at the time — were skeptical at first.

After a year and a half on a waiting list, the Osgoods got a call saying the next zebra born would be theirs. "So we decided to get going on building a barn," Osgood said, and they flew to Ramona to take a three-day course on caring for the African animal. Zeus is a plains zebra, one of three different species. When he was 10 weeks old, one of the ranch owners drove him in a trailer from California — where his parents were born — all the way to Vermont. The Osgoods had just finished his barn stall.

Now 7 years old, 14 hands high and about 500 pounds, Zeus is happy munching on horse fare — hay, grass, grain and apples as a treat.

Is it even legal to own a zebra in Vermont?

Under state law, zebras are classified as equine — not exotic — animals, which means regulation is the same as for a horse or a mule. Osgood said the state's only stipulation was that Zeus' fencing be built at least six feet high. Zebras, apparently, can jump.

It's possible Zeus is the lone zebra in cow-crazed Vermont. State officials within the Fish & Wildlife Department and Agency of Agriculture were not familiar with Zeus and said they didn't know whether any other zebras live in the state.

The Agency of Agriculture does keep a database of imported equine animals, but according to state veterinarian Kristin Haas, it doesn't distinguish between a zebra and a horse.

Zebras have never been truly domesticated, but Zeus and Osgood have a rapport. She holds up her right hand in front of Zeus' muzzle and requests a "kiss," and the zebra complies with a hasty slurp of his tongue.

Zeus had learned 10 commands by the time he arrived in Vermont — simple things like "whoa," "come to" and "back up."

He could have been trained for riding, according to Osgood, but she's never been interested and so never went that route.

She describes Zeus as "docile and sweet" and says, "I classify him more as being like a dog friend to me than a horse friend."

But he's still a wild animal — a fact Osgood readily admits. There was that time Zeus broke three of her ribs.

"He flattened me, and it was all my own fault. I spooked him and he had no idea I was behind him and I had a big thing of hay and the hay made a noise and he just back kicked me. He had no idea and was extremely apologetic."

And then there was the time she took him out for a walk when he was six months old and feeling "especially frisky." Zeus took off, dragging her along until she dropped the rope.

Osgood shrugs off the episodes as learning experiences, and she said Zeus has since mellowed. "We had a lot of growing pains together, but he is my best friend."

Zeus doesn't like winter. The Osgoods outfitted their barn with radiant heat, and he doesn't venture out during the cold months. He doesn't like water, either, or the woods. When the Osgoods are home, they let him roam because a forest and a stream — neither of which he'll venture into — border their property.

On this particular day, Zeus paces nervously in his stall, possibly disconcerted by a stranger and the click of a camera. Osgood laughs at his antics, strokes his back and puts her face against his muzzle. But when she pulls out a new red grooming brush, he seems taken aback and dodges her attempts.

Osgood says Zeus likes being brushed but she has to train him to accept any new object.

He gets along well with the other farm animals and is content to let Pocahontas, an Appaloosa who is about half his size, run the show. "She's the only female, and she rules. She snaps her head and she whips her tail," and the boys fall into line, Osgood said, "just like that."

Zebras aren't cheap — Osgood politely declined to share Zeus' price, but she offered a ballpark figure: $15,000. The training is laborious, and ownership is a long-term commitment. Osgood said it's not uncommon for zebras to live to 40. Luckily, she's got reliable babysitters when she and her husband leave town — her daughters — and said she keeps them guessing about which one will inherit Zeus.

Especially during foliage season, the Osgoods get a steady stream of uninvited visitors inquiring about the out-of-place mammal on the hill. After seven years, all the attention has gotten old, Osgood said, but she tries to be a good sport about it. And it's hard to fault the gawkers. It's not often that you can get a zebra and a covered bridge in the same shot.

The original print version of this article was headlined "Way Out of Africa, a High-Contrast Creature Roams in the Green Mountain State"