Y Homeless? How a controversial real estate deal is breaking up a household 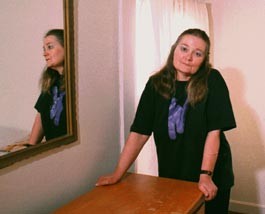 The Roman orator and prolific letter-writer Cicero perfectly summed up the nesting instinct 2057 years ago this week, when he asked rhetorically, "What is more agreeable than home?" More than two millennia later, that question resonates for a handful of Vermont women who have suddenly found themselves scrambling for other digs in a threadbare local housing market. Ironically, the organization pushing them out of their semi-communal YWCA dwelling on Main Street in Burlington is the Committee on Tem-porary Shelter, an agency devoted to ending homelessness.

"We're being displaced, like refugees in the Middle East or the Balkans," says Victoria Carter, a resident at the Y for the better part of the last 18 years. "People think it can't happen here, but it already has. To us."

"Us" refers to the 10 women living at the 196-year-old brick Victorian when it was sold to COTS in January. One of them is, in fact, from the Balkans. Vesna Dye, a Croatian ŽmigrŽ, recently moved to Essex Junction after three years as a recurring tenant at the Y. She mourns the loss of the place she called home.

"It's really a hard blow, I'm very nostalgic," Dye says about her bygone days at the Y. "It's a sorrow."

Although six women have relocated Ñ most of them unhappily Ñ four others remain at the Y for the time being. With an April 30 deadline, their options are dwindling. "A few weeks ago, one of my housemates told me she was contemplating suicide," Carter says. "I thought she'd gotten an apartment, but apparently she's still looking. She left a note on her door: ‘They've taken our life away. There's no point in going on.'"

COTS plans to use the Y to supplement its six-room Firehouse Family Shelter on North Champlain Street, according to development director Kurt Reichelt. "Last year, 300 families came to us for help," he says. "In 1995, we served only 73. That's a 400 percent increase."

Those statistics do not sway Dye, who works as a self-employed house cleaner, from her resentment. "COTS bought the Y for homeless families," she says, "but they made us homeless."

Not so, counters Reichelt, who emphasizes that COTS has made every effort to provide the "YWCA Ten" with new accommodations. "When the sale was first announced, we took all of the tenants on a tour of our other single-room-occupancy facilities," he says, referring to St. John's Hall on Elmwood Avenue and the Wilson Hotel on lower Church Street. "St. John's is permanent residency and should come close to what they had. We also offered to cover moving costs and security deposits for anyone who chooses market housing."

Janet Francis, the YWCA's executive director, echoes Reichelt's assessment. "Our board was committed to not just throwing these women out. We're not legally required to, but we felt a moral obligation to help the residents find new homes," she says. "And COTS wanted to help them find at least equal, if not better, places."

Dye briefly considered a room at St. John's Hall, but realized it had several drawbacks. "There are not enough bathrooms, the kitchens are too small, the rooms are hot, with not enough windows," she complains.

A few weeks ago, Dye began sharing a house with an elderly woman in exchange for doing some chores. She has had to trade downtown independence for a suburban existence that is more confining.

Now resigned to accepting a room at the Wilson Hotel, Victoria Carter also feels trapped. "The Wilson is not in good condition and it's mostly populated by men, but what can I do?" she laments. "I've been looking for several months; either nothing seemed satisfactory, or places I liked would fall through."

Carter, who works as a night-shift inserter at The Burlington Free Press, believes single, low-income working women without children have no advocates. "People with disabilities, the mentally ill, the really needy on government subsidies Ñ they all have someone in their corner," she suggests. "All we have is ourselves."

For nearly four decades, the YWCA structure Ñ a former doctor's office and living quarters Ñ has been available to women in need of shelter. When it opened for business in 1963, residents lived three or four to a room and could stay for a maximum of 18 weeks.

"In 1991, we renovated and switched to single-room occupancy for women with an income," explains Francis. "Rents, which never increased since then, ranged from $265 to $345, with utilities included. It seemed as if 18 weeks was too short, so that was extended to 18 or 24 months. But the Y was always transitional housing."

Apparently, that has not been the case for Victoria Carter, who initially lived "off and on" at the Y beginning in May 1984. She was in an off period "when it became long-term housing in 1991. I jumped at the chance to move back, and I've been here now for 11 straight years," she explains. "It has an atmosphere people love. We'd have backyard barbecues in the summer. We had a solidarity. Many of us lived here for such a long time that we got to be good friends."

Francis says the recent sale of the Federal-style building, for $280,000, was necessary because "rents could not sustain it, but they were capped by virtue of the grant that paid for our renovation. We required additional funding from the United Way of $18,000 a year. And fuel costs were going up."

There were other factors. "Our board felt the community has more critical needs in the housing arena than we were serving Ñ in particular, homeless families," Francis explains.

Carter suspects there might have been ulterior motives. "I think the Y needed cash to finance their camp, Hochelaga, which is in danger of going under," she suggests. "I went to the press conference where the sale was announced at the end of January and the board members were so pleased with themselves, they started singing their old camp songs. They're oblivious to our suffering. To them, we're no more important than yesterday's trash."

COTS has a different perspective on the dilemma. "It's easier for a single adult to find a one-room efficiency than for a family with children to get an apartment of any size," Reichelt says. "Our Firehouse shelter is too small. Too many families are still living in motels, which is devastating for kids."

The agency tried to solve this problem two years ago by temporarily establishing a larger family shelter at Converse Hall on the University of Vermont campus. As the summer season was ending, COTS secured a dormitory at Trinity College that could house up to 20 families at a time. But the lease could not be renewed and the facility was problematic, with only one small kitchen for all those people. "There were fights over dirty dishes left in the sink," Reichelt says. "It was not a good setup."

Even so, COTS purchased the YWCA with some trepidation. "This was a stretch for us," Reichelt observes. "It's a big project to take on."

Given that affordable housing is chronically deficient in the area, the demise of the YWCA residence pits nonprofit social service organizations and their clients against individuals with limited resources. "They're replacing us with people who are rewarded for living on subsidies," Carter says. "I'm being punished because I work for a living."

Vesna Dye agrees. "There's nothing that could replace the Y," she notes.

Carter sees a terrible irony in the morass. "The YWCA stands for empowering women. COTS stands for preventing homelessness," she says. "Thanks to both, I am now disenfranchised and basically homeless. I don't think they understood what the repercussions would be for us."

Although Francis stands by the Y's decision, she understands the frustration of the outgoing tenants. "I suppose they might feel some stigma about moving into a COTS facility, as opposed to more of a private residence. These women would probably qualify for Section 8 subsidized housing in the private sector, but there aren't enough open slots. Most of them cannot afford what's currently available on the market and still eat, quite frankly."

The situation is even more exasperating in a city overwhelmed by colleges and in a county with spotty public transportation. "We are older, so we cannot live with students," notes Dye. "And most of the women at the Y didn't have a car, so to move out of downtown is almost impossible."

But all the practical difficulties pale in comparison to the emotional void. "One housemate was my best friend for nine years," Carter recalls. "She couldn't find anything around here and had to leave the state. Friendships are being destroyed. This is about much more than the loss of a roof over our heads."

The conundrum defies easy answers. In this fast-paced world, who can deny that everything and everyone is subject to change? Yet the idea of home is central to being human. Dorothy in The Wizard of Oz discovers there's no place like it.

"The YWCA is the home of my heart," Carter says. "Nothing compares to it."