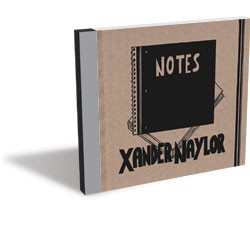 Since relocating to New York City, native son Xander Naylor has become increasingly known in experimental circles for ear-opening forays with his eponymous, free-jazz trio. On his solo debut, Notes, the son of noted Vermont secessionist Thomas Naylor applies a similarly unchained approach, fleshing out humble, cyclical instrumental sketches with both caution and whimsy. The result, while even less accessible than his previous trio work, is nonetheless fascinating, and it reveals a genuinely independent and curious mind.

“Something Changes” opens the album on a brooding, ethereal note. Above the white din of static hiss, Naylor’s guitar wanders with the sad, aimless frustration of a bird with clipped wings. Sure enough, he never quite takes flight, as bleak soundscapes tether the composition to the Earth against, one imagines, steely skies. But there’s a fractured beauty in Naylor’s stark melancholy that remains throughout the work.

“Line” emerges from the blackness in a gathering swell of bright, polyphonic drones. Shifting tones shimmer like the heat off desert dunes. A hum of static — or is it water? — running beneath the surface offers hope for an oasis on the horizon. But it may simply be a mirage.

“Rest/Wake/Realize” drenches the listener in a sonic downpour, like the familiar, soothing sound of rain against a window; a wash of layered reverb frames lugubrious guitar sustains.

With the ironically titled “Like Candy” comes a crush of dissonance. But Naylor’s tonal abrasiveness has a cleansing effect, bolstering the listener to face the tempest that follows.

“Neither Coming Nor Going” is the album’s centerpiece, and seemingly the reason for the previous tracks to exist. The 12-minute epic is a perfect storm, combining elements of the preceding material into a swirling cacophony of organic tones and manufactured sounds. Alternately calming and frightening, it builds to an ultimately exhausted conclusion.

Album closer “For the Taking” is like a blissful benediction, as full-bodied harmonics pop brightly over a lilting, acoustic trickle. But this carefree rivulet is a mere disconcerted pause before waves of electronics crash against the rocks, only to be subsumed by the roiling current below that sweeps Notes out to sea once more.

The Xander Naylor Trio play at Radio Bean this Saturday.