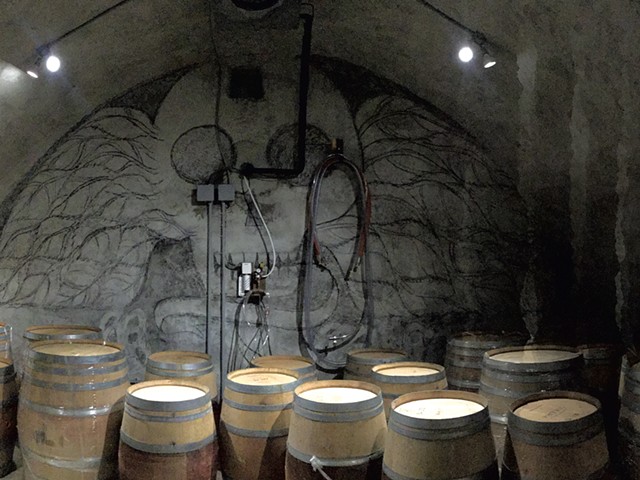 When the world is ready for the simple pleasure of a table of friends sharing beer, Wunderkammer Biermanufaktur brewer Vasilios Gletsos will have just the drink. A wheat beer made with sumac he gathered last summer, it's tentatively called Amidst and Among.

The name is meant "to emphasize the benefits and detriments of being around each other," Gletsos, 43, said in a phone interview from his Craftsbury home. He aims to put a fair amount of the beer in large-format bottles sized for more than one household.

"I'm hoping to make a beer that's a breath of fresh air and a celebration of being able to be closer to each other, to see people and to share beers and share our lives," said Gletsos, a former brewer at Hill Farmstead Brewery in Greensboro Bend. "We'll see if the virus cooperates."

While no beer could erase the loss of a year of safe occasions for conviviality, Wunderkammer beers have historically been worth the wait. Gletsos has used mixed cultures and foraged ingredients — goldenrod, mushrooms, evergreen tips, lichen — to wondrously complex and bewitching ends.

"I'm hoping to make a beer that's a breath of fresh air and a celebration of being able to be closer to each other." Vasilios Gletsos tweet this

His fans are accustomed to waiting, too. The brewer, who's attained a cult status in the beer world since he founded Wunderkammer in 2016, has typically made only about 100 barrels per year.

From brewhouse to bottling, Wunderkammer is Gletsos' solo project; he even illustrates the labels. He used to produce Wunderkammer Bier at Hill Farmstead, but he left that brewery in January 2020, beholden to a noncompete agreement that prevented him from brewing for one year. Now (mostly) free to brew on his own terms, he's started again, rechristening his project Wunderkammer Biermanufaktur. (Hill Farmstead, meanwhile, is currently on a winter break; see "Hill Hiatus").

Gletsos first came to Vermont in the 1990s to perform with Bread and Puppet Theater. After finishing art school in Maine and brewing in Oregon, he returned with his family to Vermont in 2015 and began working at Hill Farmstead. He started his own brewery to bring some variety to his five-days-a-week brewing job. "If I didn't pump the brakes a bit and lift my head up, I felt like another five years could go by, and then I'd wonder where the time had [gone]," he said.

Waiting out the noncompete clause, the father of two spent his pandemic downtime doing "back-to-basics work for my own self and my mental health," he said. That included tapping maples, logging and delivering produce for Craftsbury's Pete's Greens, which he continues to do.

Gletsos also constructed a home for Wunderkammer's rebirth at the former Bonnieview Farm creamery in Albany, which he rents from a friend. Supported by a $30,000 business-building loan from Pete's Greens Vermont Farm Fund, Gletsos remodeled part of the former cheese plant to serve as his kettle house, retrofitted the former cheese cave, and converted a cheese vat into a mash tun, reconfiguring the piping and water lines in the process. During the winter, he uses that mash tun as a coolship for passively cooling wort, a less energy-intensive method than using a heat exchanger.

Gletsos also designed a highly efficient copper kettle based on a rocket stove, which he heats using scrap slab wood. "I'm working on an entirely new type of system, unlike anything I've brewed on before," he said. "It has as much to teach me about brewing on it as I bring to the table with my previous experience."

Wunderkammer's first iteration was most noted for its foraged ingredients and mixed cultures. Those beers reflected Gletsos' study of the agrarian roots of European brewing practices over the centuries. His Waking Insects beer featured juniper and smoked malts, which appear in some Scandinavian beers; another of its ingredients, birch sap, has been used in Eastern European brews. Now those "foraged beers" will be one of three beer lines; the others will be pub classics — including lagers and English ales — and garden beers, made with cultivated vegetables.

Gletsos said he wants to revive the tradition of incorporating vegetables into beer, including fennel, parsnip, celeriac and pumpkin. "I think that the earthy palate in beer is really underexplored," he said, noting that he's even brewed with kale.

Using local vegetables, foraged ingredients, and some malts and hops from Vermont growers will give his brews a taste of the local terroir. "I'm sure the beers will be different than any other beers I've made, which is the thing I find really exciting," Gletsos said.

"I'd like to try to make about as little beer as I can," Gletsos said, emphasizing that he wants his beers to make an impact on a human scale. "As you can tell, I'm not really from a business background, though I put a lot of thought into it."

Amidst and Among, or another beer currently in the works, will be the first released under the new business moniker and could be ready for distribution to restaurants and beer shops by Vermont Beer Shepherd in April or May. Next year, when his noncompete agreement allows it, he hopes to offer direct-to-consumer sales or a CSA-like beer subscription.

Down the line, Gletsos dreams of opening a taproom in the Craftsbury area "where I could play some vinyl and sell some beer," he said. Like so many of us, he's looking forward to the time when we can once again raise our glasses at a communal table and make group memories.