WTF: With So Few Cars Out There, When Will Road Repair Begin? | WTF | Seven Days | Vermont's Independent Voice

WTF: With So Few Cars Out There, When Will Road Repair Begin? 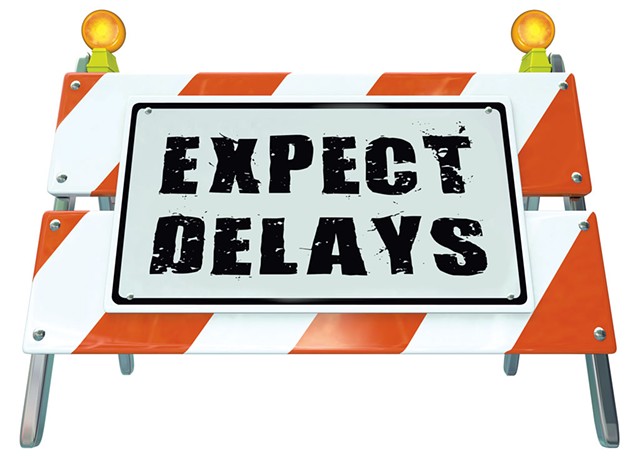 "The time to repair the roof is when the sun is shining," said president John F. Kennedy during his 1962 State of the Union address. His aphorism applies equally well to filling potholes, upgrading storm drains and repaving streets, especially since the coronavirus shutdown has cleared the roads of most vehicles.

As of last week, traffic counts on state highways and interstates were down 65 percent from pre-pandemic levels, according to the Vermont Agency of Transportation. This is despite gasoline prices that haven't been so low since Vermonters were sweating the potential impacts of Y2K.

With most people spending more time in web traffic than in highway traffic, are public works departments and VTrans capitalizing on this collective lull?

If only. Even as Vermont's most reliable indicators of spring — crocuses, robins, deer ticks — reemerged, road crews did not. On March 24, Gov. Phil Scott signed Addendum 6 to his March 13 state of emergency declaration, idling any construction projects not deemed essential to public health and safety.

Ordinarily, VTrans would have 65 to 80 projects ramping up for the season, and 30 to 40 percent would have started by April 15, according to Jeremy Reed, a state construction engineer. That didn't happen.

"We shut down the majority of our projects with the exception of the ones deemed an emergency," he added. Those include a tunnel project in Middlebury and the replacement of a drawbridge in North Hero.

Jeff Wennberg, commissioner of public works for the City of Rutland, said his crews are ready to hit the roads once they get the green light.

"We've got quite a bit of work backed up. We've always got a long list after the winter," Wennberg said. On top of the routine spring work of filling potholes and repairing snowplow damage that ordinarily would be done by now, he noted, in March Rutland passed a $45 million bond issue to catch up on years of deferred road maintenance.

However, due to the delayed start and the amount of new construction scheduled for this year, which Wennberg estimated will be double or even triple the normal volume, "We're going to be burning a lot of overtime, and we're going to be very busy through this summer. It's going to be a ton of work."

Likewise, Chapin Spencer, Burlington's director of public works, said he's still expecting "an ambitious construction season"; bids for sidewalk replacements and street paving came in last week. About the only major project he believes will be delayed is the relining of city water mains. That project, which involves hooking up homes to temporary water supplies, won't be feasible with residents still under a stay-at-home order. Otherwise, he said, his crews are healthy and ready to return.

Matt Musgrave, government affairs director of the Associated General Contractors of Vermont, said he's eager to see roadwork resume. AGC represents nearly 200 companies doing residential, commercial and civil construction, which collectively employ 15,000 to 16,000 workers. Musgrave likened the last month to "the seven stages of coping" with grief. For a time, he said, Vermont was the only state in the country that didn't allow outdoor construction during its stay-at-home order.

Though his people were champing at the bit, especially during a milder-than-normal spring, Musgrave said his organization rejected the idea of demanding the right to return to work, calling it "a failing strategy.

"There are protests occurring at construction sites in other states" to reopen early, Musgrave continued. "We don't want to do that. We want to show the public that when we go back out there, it's going to be [done] responsibly."

That was more than a mere public-relations decision. As Musgrave pointed out, the median age of AGC-affiliated workers is 55, and Vermont already had a workforce shortage before the pandemic struck. The last thing they need right now, he said, is to make it worse by having employees out sick with COVID-19.

But last week, Scott's "spigot" turned on again, if only at a trickle. As of April 20, the governor allowed "micro-crews" of no more than two people to perform construction work outdoors and in unoccupied structures. Employees must wear masks over their noses and mouths at all times and maintain six-foot social distancing while on job sites.

While two-person crews can easily fill potholes, what does that restriction mean for major infrastructure projects?

There's a lot of nuance to the two-person rule, said Reed at VTrans. Flaggers 150 feet away on either end of a two-person crew won't count toward the crew size. Likewise, because many state highway projects are "long and linear," meaning they span several miles, crews aren't necessarily sharing tools or coming into close contact with one another and hence wouldn't violate the two-person limit.

"Obviously, washing your hands with soap and water on a construction site is not the easiest thing to do," he added. "We're using a lot of hand sanitizer."

But even as the state further loosens its worksite restrictions, Musgrave said he expects that certain protective measures will remain in place. For example, if he has, say, 40 people working on a job site, they may be divided into groups of five, with staggered shifts and lunch breaks and no intermingling among groups. The reason: If one worker shows up with COVID symptoms, all 40 employees won't have to be quarantined.

What does all this mean for motorists once Vermont's stay-at-home order is relaxed? Notwithstanding this month's vacant roads, expect to see traffic cones and reduced lanes into the summer and fall. And while most of us will be eager to return to our pre-pandemic lives, slowing down and maintaining good social distancing from construction crews while driving through work zones will, in another way, protect lives.

Got a Vermont head-scratcher that has you stumped? Ask us! wtf@sevendaysvt.com.

The original print version of this article was headlined "With So Few Cars Out There, When Will Roadwork Begin?"