WTF: Will Fire-Ravaged Pearl Street Beverage Open, and When? 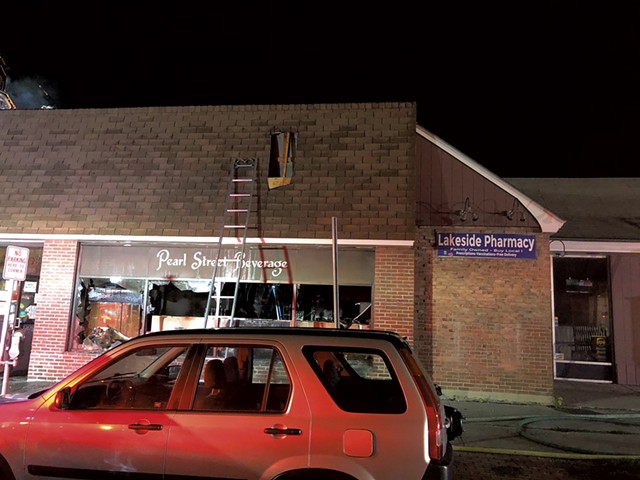 If ever there were a year that called for a stiff drink, it would be 2020. Make it a double for John Dubie, owner of Pearl Street Beverage in Burlington. This year he suffered the one-two punch of a revenue-decimating pandemic followed by a July 1 building fire that gutted the liquor store he founded 37 years ago. More than five months after the last embers were extinguished, the store, which was consistently one of the top-five liquor sellers in the state, has yet to reopen.

Given that the winter holiday season is one of the most lucrative times of year for beer, wine and booze retailers — according to Dubie, New Year's Eve alone typically accounts for 60 to 70 percent of his December sales — many people are asking when, or even if, Pearl Street Beverage will reopen. And, if Dubie plans to reopen, why the long delay?

He declined to answer that last question publicly, saying only, "My team and I are working very hard to come back, hopefully [by] spring."

Here's what we know: In March, when Gov. Phil Scott issued his "Stay Home, Stay Safe" executive order shuttering many Vermont businesses, Pearl Street Beverage was allowed to remain open. For the first few months, the store permitted no more than five customers inside at a time.

As Vermonters began doing most or all of their alcohol consumption at home, many liquor stores around the state saw a spike in sales. Not Pearl Street Beverage. In pre-pandemic days, much of its booze biz came from college students who attend nearby University of Vermont or Champlain College, as well as from Burlington's downtown labor force.

When local colleges switched to remote learning and many students left town, sales dwindled. By May, as many downtown workers stopped commuting to the Queen City, they began purchasing liquor from retailers closer to their homes.

Sales during the early days of the pandemic weren't down across the board, Dubie said. Notably, Pearl Street Beverage saw an uptick in business in its new pipe, bong, vape and CBD department, which Dubie's son launched about a year earlier to replace the store's growler bar. And, because many downtown smoke shops were closed and the store's prices were competitive with those that remained open, revenues from that part of the business offered a glimmer of hope in an otherwise dismal spring.

"We lost a ton of money," Dubie said, "but June was coming back nicely."

But then, in the early morning hours of July 1 — 1:57 a.m., to be exact — an electrical fire erupted alongside some shelves of alcohol. Dubie likened the flash to "throwing a Molotov cocktail." At 2:07 a.m. he got a phone call from his security company that one of the store's motion detectors had tripped; Burlington police were on the scene by 2:12 a.m. The Burlington Fire Department arrived by 2:16 a.m. and had the fire under control by 2:30 a.m.

How is Dubie able to describe the blaze and its time sequence in such detail?

"We have, on our video system, pretty much the whole fire from start to finish," he explained.

The inferno eviscerated the building but left its structure largely intact. It was originally built in 1941 and served as a neighborhood grocery store until the 1960s. Later, it was home to a state-run liquor outlet that Dubie, who grew up on Henry Street just a couple of blocks away, remembers from his childhood. After he got out of the Army at age 23, Dubie took over the space and founded Pearl Street Beverage in 1983.

As if the fire weren't bad enough, in the days and weeks that followed, Dubie and his staff had to squelch some "nasty rumors" about its cause, including one, he noted, that claimed the store had been firebombed for refusing to fly a Black Lives Matter flag.

"That was one of the meaner ones," he said. "That wasn't the case at all." 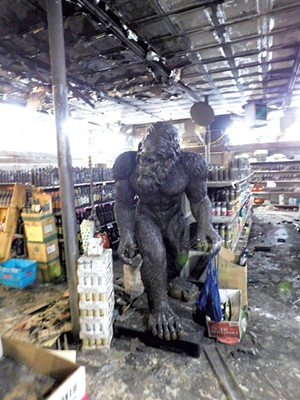 But even amid all the devastation and loss, Dubie salvaged a few moments of levity. He learned later that when Burlington firefighters entered the burning store, several were startled at the sight of "Harriet," a six-and-a-half-foot-tall model Sasquatch that's been on display in Pearl Street Beverage for about five years.

Ultimately, Harriet survived the blaze; a state fire investigator even took a selfie with the bigfoot, which he later posted to Facebook. A scorched Harriet now resides in front of Dubie's house in South Hero, chained to a tree, where passersby continue to snap selfies with her.

Dubie said he's now more than 90 percent sure the business will come back stronger than ever — and under a new name: Pearl Street Pipe and Beverage. The new store, which will be energy efficient and handicap accessible, will expand its offerings of pipes, bongs, rolling papers, vape and CBD products. He's also planning a new wine club to complement the store's tasting and education area.

Despite this year's disaster, if a fire had to occur, Dubie added, he's glad it happened during the pandemic. Though nearly all his staff had to be laid off a month after the fire, for now at least, "Going to work won't kill them."

Hey, we'll drink to that.

The original print version of this article was headlined "Will Pearl Street Beverage Reopen?"