WTF: Why Would an Owl Attack Someone? | WTF | Seven Days | Vermont's Independent Voice

WTF: Why Would an Owl Attack Someone? 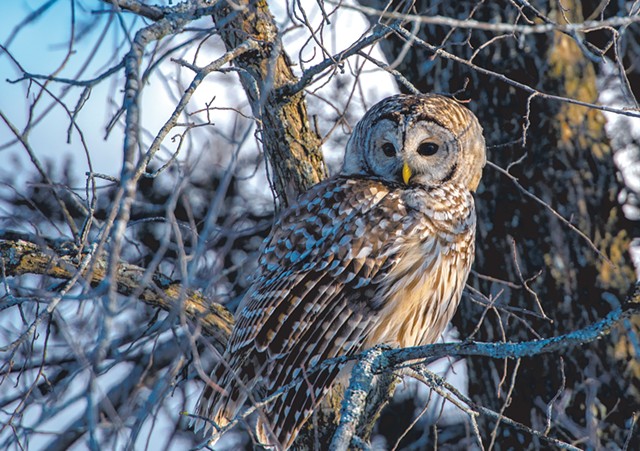 On a Sunday morning in October, I was frying eggs in the kitchen when I received a phone call that made me drop the spatula.

"I was attacked by an owl," my husband, Jeff, told me. He was calling from Shelburne Farms, where he and his friend Eric have been taking weekly predawn walks since the pandemic started.

After assuring me that he was OK — save for a small, curved scratch on the side of his forehead — Jeff explained what had happened.

As he and Eric left Shelburne Farms' popular lookout point, Lone Tree Hill, and headed down a moonlit path flanked by woods, they spotted a big owl about eight feet away on a low tree branch. They turned to walk away, "and all of a sudden, I feel a smashing on my head. Boom!" Jeff recounted.

Disoriented, with his peripheral vision blocked by his sweatshirt hood, Jeff asked Eric whether he had hit him by accident. Eric told him the owl was the culprit.

Thoroughly freaked out, the men took off down the path — running, screaming, laughing and flailing their arms. Several times, they turned back and saw the owl flying behind them. Eventually, when they reached a grassy clearing, the owl was gone.

Owls are fierce predators, but since when do they attack humans? Curious to know how frequent such encounters are in Vermont, I emailed Cat Parrish, Shelburne Farms' family program coordinator and farm-based educator.

She told me that the nonprofit estate is home to an array of owl species — including barred, eastern screech, northern saw-whet and great horned — and she put me in touch with Craig Newman. He's the director of Outreach for Earth Stewardship, a raptor rehabilitation and wildlife education nonprofit headquartered at Shelburne Farms. He maintains an aviary of 12 birds there, including some owls that can't be released back into the wild because of permanent injuries.

When I recounted my husband's owl experience, Newman chuckled knowingly. He said he hears about this kind of thing "a couple times a season" and that it happens not just at Shelburne Farms but also at other local recreational areas, such as Red Rocks Park in South Burlington and Indian Brook Park in Essex. Officials have even posted warning signs about owls on occasion.

Owl dive-bombs are more likely to occur during the spring breeding season, when the birds are trying to protect their nests or young, Newman said. Other things might cause an owl to swoop, he said. For instance, they might confuse a tassel or pom-pom on a winter hat with "some bushy little squirrel tail" and move in for the kill.

"But for the most part, I think it's just territorial," Newman said. "They're just saying, 'Ehhh, you're a little too close to where I raise my young. I don't want you here.'"

Newman speculated that the owl my husband encountered was a great horned or barred owl — two of the larger species. The barred owl is most active just before sunrise or in the early evening, Newman said, which tracked with the timing of Jeff's run-in.

Newman has been on the receiving end of multiple owl attacks. One owl that lives in the aviary, he said, has taken his headlight, two hats and a piece of his ear.

The latter incident was an ambush that happened early one evening. "He was making a beeline for the side of my face, and I just grabbed him as he made contact with my ear," Newman said. "He definitely drew blood."

On the bright side, owls don't carry rabies or other diseases that can be transmitted to humans, Newman said, though it's possible to get an infection if an owl breaks skin and bacteria get into the wound.

For more help in deciphering why my husband was targeted, I set up a video call with St. Albans naturalist Bridget Butler, who calls herself the Bird Diva.

Butler was a bit surprised by my story. She said that other raptors, such as peregrine falcons and northern goshawks, are more notorious for dive-bombing than owls. People aren't used to "an aerial threat," which makes bird attacks especially intimidating, Butler said.

This time of year, barred owls are establishing space to build their nests, she told me, which sometimes means duking it out with other owls. Juvenile birds, which are new to this practice, might be "super fierce" to try to assert themselves.

Another possibility is that a young owl new to hunting saw Jeff as a potential meal. His dark, rounded sweatshirt hood, Butler noted, might have given him the appearance of a smaller animal.

I asked Butler how people might protect themselves from a similar encounter.

"As an individual, if that's your routine walk, you probably need to switch it up and pick a different spot to go to," Butler said. "Or get a hard hat."

Kurt Valenta, who teaches kids and adults about nature through his Enosburg Falls-based organization Exordium, had another suggestion.

Butler encouraged me to try to see the experience from the bird's perspective.

"Can you imagine what's going through that owl's head? So he hits your husband, and then there's ... the yelling and the screaming and the laughing. That's got to be a totally new sound for that owl," she said. "Maybe that's enough that the owl is like, 'Yeah, I'm not going after that type of thing ever again.'"

Just before we ended our call, Butler said she thought my husband's experience was kind of cool.

"I'm a little envious," she admitted.

I told her that even though Jeff said the incident was kind of scary, it also made him feel somehow more alive.

"And, like, part of nature," Butler added. "That's the other kind of crazy, cool thing about this. We often think of ourselves as 'separate from.' This owl saw him as 'part of.'"