WTF: Why Is There a Lyme Vaccine for Dogs but Not for Humans? | WTF | Seven Days | Vermont's Independent Voice

WTF: Why Is There a Lyme Vaccine for Dogs but Not for Humans? 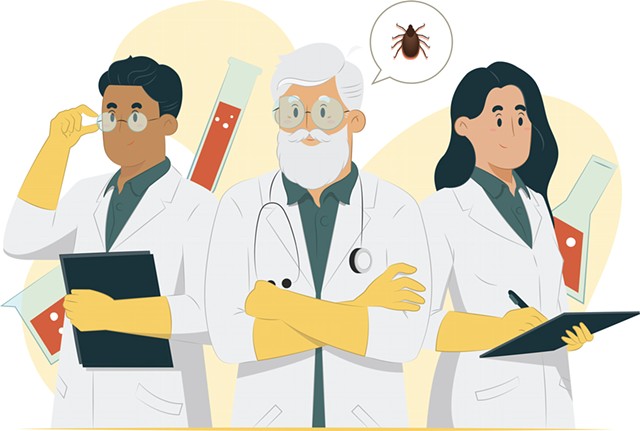 Dog owners who routinely vaccinate their pets against common canine maladies have probably wondered, Why can my pup get a shot to prevent Lyme disease, but I can't? We've all just experienced a year when drug manufacturers developed, mass-produced and distributed new vaccines in record time, slowing the spread of a virus that was unknown just two years earlier. So why haven't they figured out how to prevent a rapidly spreading disease that's been around for decades?

Short answer: They already did. But, as is often the case with Lyme disease, the reason a vaccine isn't available has less to do with science than with the fears, misconceptions and controversies surrounding this illness.

Lyme disease was first identified in the mid-1970s among children in the Connecticut town of Lyme; since then, it's become the most common vector-borne disease in the northern hemisphere. According to the U.S. Centers for Disease Control and Prevention, approximately 476,000 Americans are diagnosed and treated for Lyme each year. Vermont has one of the highest per-capita infection rates in the country.

By now, anyone who spends significant time outdoors knows the story: Lyme is caused by a bite from a black-legged tick, aka the deer tick, that's infected with Borrelia burgdorferi. According to the Vermont Department of Health, more than half of the black-legged ticks collected in the state have tested positive for that bacterium. Lyme's symptoms, which appear within three weeks of the bite, include fever, headaches, fatigue, joint and muscle pains, and the classic bull's-eye rash.

Dr. William Raszka knows almost immediately when Vermont's ticks start biting each spring based on the number of calls to his clinic. He's a pediatric infectious disease specialist at the University of Vermont Medical Center, a professor of pediatrics at UVM's Larner College of Medicine and Vermont's go-to expert for treating Lyme in children.

Raszka isn't a vaccine researcher, but he follows the medical literature closely and has been treating Lyme since he saw his first case in 1994 in El Paso, Texas, where Lyme isn't endemic. (His teenage patient had just moved there from Connecticut.) Raszka remembers the drug trials for two Lyme vaccines in the 1990s, which "showed pretty significant efficacy," he said.

As Raszka explained, both vaccines essentially worked the same way: They spurred the immune system to create antibodies to surface proteins on the Borrelia burgdorferi microbe. When a tick bit a vaccinated person and fed on their blood, those human antibodies bound to and killed the microbes in the tick's gut, preventing transmission of the disease.

In 1998, the U.S. Food & Drug Administration approved one of the vaccines, called LYMErix, which was about 80 percent effective in human trials. Just three years later, however, LYMErix was off the market, and the second vaccine, ImuLyme, never made it there. Why?

Within two years of its FDA approval, LYMErix received extensive media coverage due to alleged adverse reactions. As the peer-reviewed journal Epidemiology & Infection reported in its January 2007 story "The Lyme Vaccine: A Cautionary Tale," a Philadelphia law firm brought a class-action lawsuit on behalf of 121 people who claimed to have experienced significant side effects after getting jabbed.

Growing public concern prompted the FDA to revisit the phase 3 drug trial data, causing use of the vaccine to plummet. Though the subsequent review showed no difference in side effects between recipients of the vaccine and those of a placebo, GlaxoSmithKline voluntarily withdrew LYMErix from the market in February 2002 amid negative publicity, litigation and declining sales.

Raszka noted that about 5 to 10 percent of people who contract Lyme "feel rotten afterwards," experiencing what's called posttreatment Lyme disease syndrome. (Most physicians and researchers don't call it "chronic Lyme.") Lasting as long as six months or more, symptoms include pain, fatigue and brain fog, all of which Raszka has seen in his own patients.

"The challenge we've had is that there are a lot of different approaches to this," he said of the long-term syndrome. "What causes it is not known, and what's the best management is also not known."

Some physicians believe in prescribing antibiotics to such patients long term, but the practice is so controversial that states have revoked doctors' medical licenses for doing so. To prevent similar repercussions in Vermont, in 2014 the legislature enacted Act 134, which bars the Vermont Board of Medical Practice from disciplining doctors who treat Lyme patients with long-term antibiotics.

What does all of this have to do with the viability of future Lyme vaccines?

As Raszka explained, because vaccines stimulate an immune response, some people fear they will trigger symptoms that resemble posttreatment Lyme. Any new vaccine must be highly effective, he said, and its makers must alleviate those concerns.

But the landscape has changed since the withdrawal of LYMErix, when Lyme wasn't nearly as prevalent as it is today. In 2005, Vermont had just 56 confirmed or suspected cases; in 2018, it had 614, according to health department data. Those numbers, which reflect nationwide trends, help explain why an experimental vaccine is back in the news.

In March, collaborating drug makers Valneva and Pfizer announced the start of a phase 2 clinical study for a new human Lyme vaccine. The trial involves about 600 participants, including kids as young as 5. According to the companies' press release, their VLA15 vaccine protects against six serotypes, or variants, of the bacteria that are prevalent in North America and Europe.

Will the public embrace a new Lyme shot — or avoid it like the plague? Vaccine hesitancy has increased since the early 2000s, and one major argument for COVID-19 vaccines — that they serve a community good — doesn't apply to noncommunicable Lyme. As Raszka pointed out, "There's no herd immunity with a Lyme disease vaccine ... and nobody dies from Lyme."