WTF: Why Is There a Dry-Docked Ferry at Shelburne Shipyard? | WTF | Seven Days | Vermont's Independent Voice

WTF: Why Is There a Dry-Docked Ferry at Shelburne Shipyard? 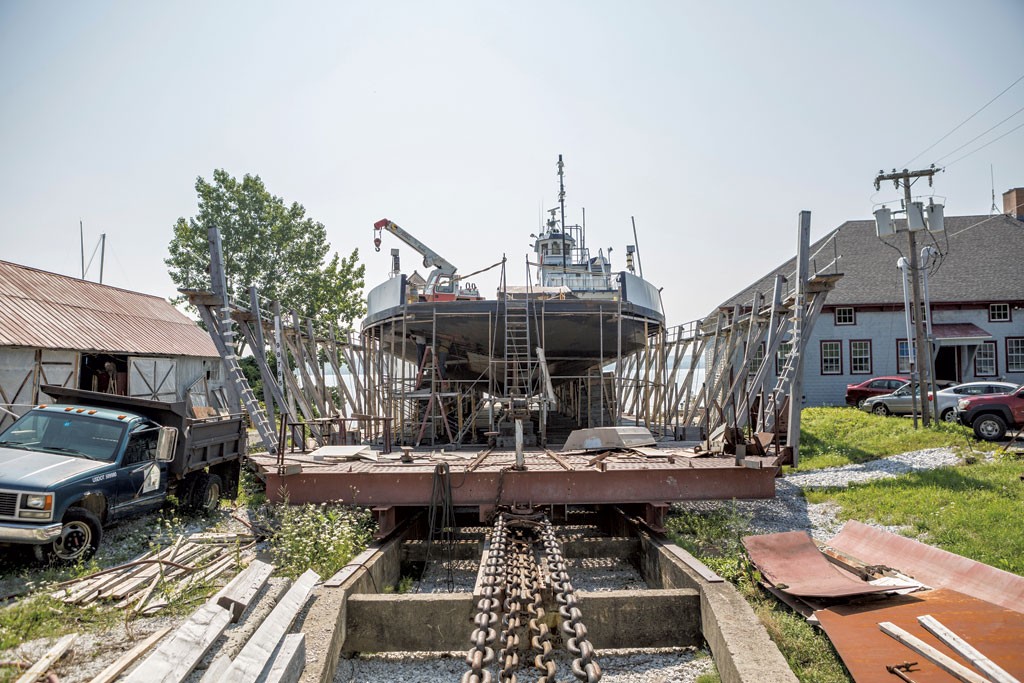 If you've recently taken a walk past Red Rocks Park, curving around Shelburne Bay, you may have spied it from afar. Or if you've explored the reaches of Shelburne Farms, wandering down Harbor Road until you could go no farther, you may have seen it up close: a dry-docked ferry bellied up to Shelburne Shipyard. You may have thought, WTF? Or maybe you didn't pay it any mind.

If you live or work near Lake Champlain, or spend any time recreating on it, ferries are a common sight and easy to ignore. Maybe all you think about them is that they move people from one side of the lake to the other — about 1 million people per year, as it happens. Seeing a grounded ferry is not so common — with the exception of the retired steamer Ticonderoga at Shelburne Museum. But the one dry-docked at Shelburne Shipyard isn't really a mystery: It's there for maintenance.

The proud and sometimes quirky history of Vermont's ferries is interesting, though. It's outlined on the website of the Lake Champlain Transportation Company (LCT), which, under various names and owners, has been continuously operating ferry service since 1826. Fun fact: The busiest crossing in LCT's history was in August 1996 owing to a Phish concert at the former Plattsburgh airbase.

Back in the 19th century, when Burlington was home to a thriving lumber industry, ferries moved commercial goods up and down the lake; some were used for luxury cruises. Eventually, modernization and railroads ended ferries' heyday, and the transportation takeover by cars and trucks struck the final blow.

But we still need to get across the lake. Now, Vermont's ferry service exists primarily to connect commuters, truckers and other travelers to the New York side, and vice versa. If you live on Vermont's west coast, you probably know that the ferries cross in three locations. The northernmost, at Grand Isle, runs 24/7 year-round and provides a vital 14-minute link for commuters to and from the Plattsburgh area. The 10-mile Burlington-to-Port-Kent crossing takes an hour and is only in service during the summer (ending this year on September 28). The Charlotte-to-Essex journey clocks in at 20 minutes and is available year-round, ice conditions permitting.

LCT operations manager Heather Stewart has been with the ferry company for 32 years. "I could drive a boat before I could drive a car," she says. As a young woman looking for summer work, Stewart stopped at the office to ask if LCT was hiring. "Two days later, I was on the deck," she recalls. "It was supposed to be temporary, but I ended up getting my captain's license. I'm 53 now and still here."

Stewart has witnessed many transformations in the fleet, which now numbers 10 and has been under the management of Burlington's Pecor family since 1976. She describes the rebuild of the Champlain Bridge — between Crown Point, N.Y., and Addison, Vt. — as a challenging but exciting time for the company.

Because of safety concerns, that bridge was closed on October 16, 2009, and demolished on December 28. Lengthy rerouting and commuter frustrations ensued. To ease the situation for frequent users, before the new bridge opened nearly two years later, LCT ran a temporary, year-round route in the location. The additional passenger fares were used to build a new ferry, Stewart says. It was named after the original Pecor patriarch who had purchased the company, Raymond C. Pecor Jr., as a surprise honor to him, notes the LCT website. (His son, Ray Pecor III, is now the owner.)

The most impressive vessel in the LCT fleet, at least in terms of longevity, is the Adirondack. Affectionately nicknamed Adi, she just completed her 101st year of service. To put that in perspective, the boat is just one year younger than the Titanic. She still makes trips across the lake every summer, on the Burlington-to-Port-Kent route, as the oldest double-ended American ferryboat in history.

But with age comes the need for repairs. The U.S. Coast Guard heavily regulates LCT's fleet, as it does all commercial vessels. Engines and gauges must be checked, steel sheets replaced; the to-do list is unique to each vessel. As a result, there's no typical ferry lifespan, since every boat consists of both new and old parts.

In addition to undergoing quarterly and annual in-water evaluations, a ferry must be taken out of the water every five years for a complete hull inspection. That explains the current landlubber status of the Plattsburgh at Shelburne Shipyard.

Sometimes, though, it's too late to save an ailing ship. In 1959, the Roosevelt, a diesel ferry with a 108-foot wooden hull, began to take on water due to several large leaks. She was towed to the middle of the lake and intentionally hacked to sink her; the Roosevelt still resides at the bottom of the lake.

That ill-fated example aside, LCT aims to keep its vessels up to par and serve its lake-crossing customers. The company appears to inspire loyalty: "The average length [of employment] is 18 years," Stewart says, describing LCT as a family. When a pilot or crew member is sick, "we can call and say, 'Come on down' at three, four in the morning," she adds, "and they will come and help out. It's pretty cool."

Stewart sums up LCT's mission and history thus: "That keep-it-local thing — we've been doing that for a long time."