WTF: Why Is the Town of Westford Suing Its Own Residents? | WTF | Seven Days | Vermont's Independent Voice

WTF: Why Is the Town of Westford Suing Its Own Residents? 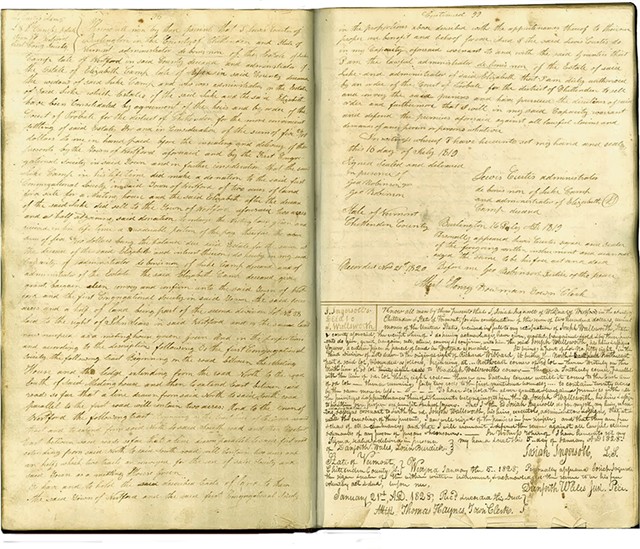 Ordinarily, Mike Lynch of Ferrisburgh doesn't read Seven Days' legal notices. But on a recent night, while working on a crossword puzzle in bed, the retired librarian spotted one in the March 28 issue that piqued his curiosity. It read, "This Summons Is Directed to: Residents of the Town of Westford. You Are Being Sued."

Specifically, what caught Lynch's attention was the plaintiff in the lawsuit, filed in Chittenden County Superior Court: the town of Westford. WTF?

It's fairly common for citizens to bring lawsuits against federal, state and local governments; activists do it all the time. Municipalities also routinely sue other municipalities. Just last week, 10 mayors in Miami-Dade and Broward counties sued the State of Florida in an effort to enact stricter gun-control measures than state law allows.

Far less common are lawsuits brought by municipalities against their own citizens on matters other than outstanding parking tickets, unpaid tax bills and unkempt yards. Last December, the town of Sibley, Iowa, threatened legal action against lifelong resident Josh Harms after he posted a warning on his personal website telling people not to move to Sibley because, as he described it, the town smells like "rancid dog food." Last month, the American Civil Liberties Union of Iowa helped Harms win an injunction and monetary award against the town for violating his free-speech rights.

Then there's the bizarre case from Pittsford, N.Y. In 2015, the town's developers, village trustees and village planning board members filed five lawsuits and countersuits against one another, resulting in Pittsford effectively suing itself — and leaving taxpayers to foot legal bills in excess of $250,000.

So what's going on in usually sleepy Westford? The published legal notice certainly sounds ominous: "You will lose your case if you do not give your written answer to the court." But, explained Westford's attorney, David Rugh of the Burlington law firm Stitzel Page & Fletcher, "While the details are complex, the genesis and reasoning are pretty straightforward." And, it seems, more benign than they at first appear.

The origins of this case date back to an 1819 land deed. They involve an 1850 Vermont Supreme Court case and a legal doctrine known as "adverse possession" — better understood in layman's terms as "use it or lose it."

First, the 21st-century activity that precipitated the case: A few years ago, the Town of Westford decided to sell a 0.4-acre parcel of land it owns at the southwestern corner of the town green and entered into a purchase and sale agreement with Westford resident Jeff Hutchins. However, when Hutchins received the title examination — essentially, a method of determining whether anyone else has a legal claim to the property — he discovered an "encumbrance" had been created by an 1850 Vermont Supreme Court decision in State v. Woodward.

The 0.4-acre parcel in question had originally been part of a 2.5-acre parcel donated to the town and the First Congregational Society of Westford in 1819 by the estate of Luke and Elizabeth Camp. The Curtis Deed, as it's known, conveyed the land to use by the public for expanding the meetinghouse green.

In 1844, the parcel was sold for $32 to John Woodward, who later fenced off his "64 rods of land," as it's delineated in the deed. (For readers unfamiliar with 19th-century surveyors' terminology such as "rods," "links," "stakes" and "stones," a rod equals 16.5 feet.) A local prosecutor determined that Woodward had created "a nuisance" by enclosing the parcel, and brought a trespass action against him.

Understandably pissed, Woodward fought the case to the Vermont Supreme Court. The court ruled that, because the parcel had been in continuous public use from 1819 to 1844, Woodward couldn't fence it off and keep his neighbors from parking their horses and buggies on his lawn.

Fast-forward 168 years. According to the complaint, the town now wants to convey the land to Hutchins and other property owners, giving them all clear title to their property. Evidently, some of the parcel in question has long been part of two other residents' front yards. And since there's no evidence or record of the public using it since the 1950s, adverse possession applies.

But why a lawsuit? As Rugh explained, it's really just a legal mechanism for notifying all of Westford's residents that the town is selling property that residents likely didn't know they owned in the first place. (Notice was also issued during Town Meeting in March.)

"We're not trying to get all the residents of Westford to pay us money or anything like that," Rugh emphasized.

There's no controversy surrounding this sale, he added, as the buyer is paying fair market value for the land. According to his lawyer, Liam Murphy, Hutchins plans to open a country store on the site adjacent to the green, which he believes will be a great addition to the community.

Much legal ado about nothing? Perhaps, but it's a great example of why it pays to hire a competent real estate attorney when buying or selling land. If you don't, just remember what they say about stakes and stones.