WTF: Why Is the Old Pizza Hut in South Burlington Still Empty? 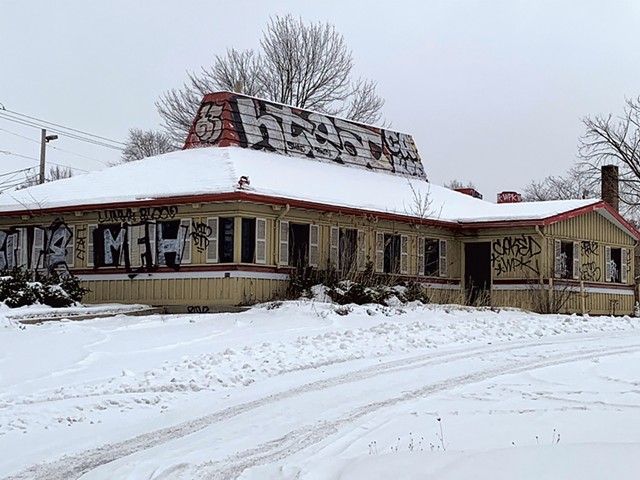 If there's a vacant building in Chittenden County tagged with more graffiti than the former Pizza Hut at 764 Shelburne Road in South Burlington, we have yet to discover it. Following the restaurant's demise about a decade ago, the New England Federal Credit Union used the building as a temporary branch until its new building was completed in August 2013.

Since then, the 2,475-square-foot building has sat empty, becoming a de facto canvas for local taggers. Its long-term dormancy puzzled one Seven Days reader, who wrote in recently to ask why no new business has occupied the old Pizza Hut, given the site's accessibility to interstates 89 and 189 and its prominence in a high-traffic commercial district.

The fact that people still refer to it as "the old Pizza Hut," when the last meat lover's special went out the door during Barack Obama's first presidential term, is a testament to the national chain's architectural notoriety. You can cover the iconic red roof with spray paint and replace the dining room booths with an ATM and teller windows, but for many people it will forever remain a Pizza Hut.

That's the subject of Reddit's "former Pizza Huts" page. The site features dozens of images of other ex-Huts that have been repurposed as new businesses, including Chinese and Mexican restaurants, nightclubs, and even COVID-19 rapid-testing sites.

One, in East Rockaway, N.Y., became a Laundromat; another, in Columbus, Ga., turned into a payday loan and pawn shop; a third, in Brattleboro, took on a second life as an urgent care facility. Get me 30 ccs of ranch dipping sauce, stat!

And those aren't even the most unusual reuses. Green Alien Cannabis in Bangor, Maine, and the Bud Hut in Walsenburg, Colo., are both former Pizza Huts that were rerolled as marijuana dispensaries. Such repurposing seems either apropos or cruel, depending on whether customers walk in with the munchies.

Another former Hut, in Boynton Beach, Fla., was resurrected as the Church of Our Savior. And one in Montgomery, Ala., morphed into a children's daycare center. At the other end of the life cycle, there's an ex-Hut in Sydney, Australia, that now houses a funeral home.

The South Burlington Pizza Hut enjoyed a decades-long run as an affordable, 100-seat eatery, from its grand opening in 1977 until the last pizza went cold in 2011. So why isn't anything new cooking under the signature red roof?

Jeff Nick, president of J.L. Davis Realty in Burlington, represents the current property owner, who also owns the adjacent Shell gas station to the north and an abutting lot to the east. According to Nick, a number of redevelopment plans have been kicking around for that site over the years, though none has yet come to fruition.

"We've fielded a lot of interest from different retailers and restaurants [about being] there," he said. "We're trying to figure out the best combination of uses ... because it's such a prime location."

According to Nick, the current owner isn't looking to sell the property but to redevelop it, either by rehabbing the existing building or tearing it down and erecting a new one. He noted that they're currently working with an architect and contractor to figure out what would work best on the site. One possibility, Nick suggested, is that two lots may be combined to house a new convenience store and gas station.

As for the building's current, um, crack-house aesthetic, Nick called the proliferation of graffiti "unfortunate."

"The owner tried to maintain it, but [the graffiti] just kept coming back," he continued. "Finally, it became such an expensive proposition to keep the graffiti off of it."

Redevelopment plans were in the works prior to the pandemic, Nick added, but market uncertainties last year effectively put the brakes on any new projects.

However, now that there appears to be a light at the end of the coronavirus tunnel, he said, "I think businesspeople are more comfortable making decisions." Nick pointed to the recent uptick in leasing activity on Church Street — including a new Chase Bank branch that's moving into the former GAP store at the north end of the block — as signs that Chittenden County's commercial real estate market is starting to heat up again.

As for when South Burlington might see a new occupant of the old Hut, Nick estimated that redevelopment plans should be submitted to city planners "in the next six months."

Meanwhile, if anyone is hankering for Pizza Hut, there are still five in the Green Mountain State: in Bennington, Berlin, Rutland, St. Albans and St. Johnsbury.

That is, unless Vermont's retail cannabis dispensaries move in.

Correction, February 8, 2021: An earlier version of this story incorrectly stated when the New England Federal Credit Union closed its temporary branch there. It was August 2013