WTF: Why Is Public Nudity Legal in Vermont But Public Disrobing Isn't? 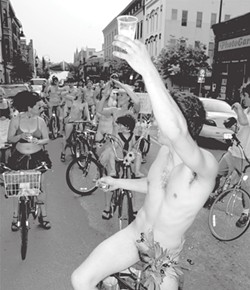 Vermont's flip-floppy attitude on public nudity can confound newcomers who learn that, though it's legal to be naked in public, it's illegal to get naked there. Vermonters can let it all hang out outdoors — provided "it" was already hanging out when they left their home, car or place of employment. The actual shedding of garments al fresco exposes the perpetrator not only to the elements but also to the risk of prosecution for lewd and lascivious conduct. Huh?

Legally, the distinction between garden-variety nude sunbathing and raincoat-clad flashing has much to do with what offends the public's "sense of decency, propriety and morality." That standard was established in 1846, when the Vermont Supreme Court was asked to decide, in State v. Millard, whether one J. Millard of Orleans County was guilty of lewd and lascivious conduct after he repeatedly "exposed his private parts" to several people "with intent to incite in their minds lewd and unchaste desires and inclinations." Prudently, the court determined that Millard wasn't a nudist but a pervert.

The legal threshold for bringing an L&L charge for public nudity, or even the lesser one of disorderly conduct, has evolved over time. In the early 1970s, just as hippies and back-to-the-landers were arriving in the Green Mountain State, the state police asked then-Chittenden County state's attorney Patrick Leahy to weigh in on what Leahy called the "time-honored practice of unclothed swimming, known colloquially as 'skinny-dipping.'"

After one overzealous prosecutor sparked public outrage by jailing a man for swimming au naturel in a river, the cops expressed confusion as to the appropriate response to birthday-suit bathers.

In response, Leahy penned a somewhat tongue-in-cheek missive to "any law-enforcement officer so lacking in other criminal matters to investigate, so as to have time to investigate this currently popular subject."

"I was originally disinclined to slow the crime-fighting operation of the Chittenden County State's Attorney's Office long enough to issue a memorandum of such minuscule moment," Leahy wrote in his July 7, 1971, memo. But after "researching the issue" — mostly by consulting colleagues and reviewing "old Norman Rockwell paintings thoughtfully resurrected by the ACLU, showing such activities taking place allegedly in Vermont" — Leahy determined that "most Vermonters I've talked to have engaged in such scandalous activity at some time in their life (with the exception of a couple I didn't believe, who claimed to have done so in May in Vermont)."

Ultimately, Leahy advised that while nude bathing was unacceptable in certain public areas — such as Burlington's North Beach, where local ordinance specifically bans it — it was fine on private land out of public view.

As for semi-secluded areas, Leahy determined that nudity is acceptable "if no member of the public present is offended, no disorderly conduct has taken place." But if said nakedness doth offend, Leahy advised the cops to ask the skinny-dippers to get dressed or face a ticket.

In later years, that standard for police involvement eroded to the point where the mere public airing of one's junk no longer qualified as a potential violation. Throughout the 1980s and '90s, several parks and beaches around Vermont became hangouts for those who enjoy in-the-buff recreation.

One such spot is the Ledges, a clothing-optional swimming hole on Wilmington's Harriman Reservoir. In the late 1990s, as the Ledges grew in popularity, it began attracting unwanted scrutiny, drawing complaints about discarded condoms, sex in the woods and the occasional "bush-whacker," aka public masturbator.

Though such incidents were rare, in June 2001 the Wilmington Selectboard decided to just say no. In a four-to-one vote, the board enacted the Wilmington Public Indecency Ordinance. It was spearheaded by the aptly named Margaret Frost, a grandmother who owned a cabin on the reservoir and described herself as affronted by the full-frontal nudity on view. According to an October 2002 New Yorker story about the dustup, Frost's cabin was about 200 yards from the nearest full Monty, leading one to suppose she had a fine pair of binoculars for viewing the, um, wildlife.

The following year, a citizens' group called Friends of the Ledges drew on support from several nationwide "naturist" groups and rallied enough public support to overturn the ban. Today, the Ledges remains one of the best-known clothing-optional parks in New England.

A more successful effort to strip away the right to bare asses was mounted in Brattleboro in August 2006, after some local residents complained about teens publicly airing their privates downtown. A year later, the town selectboard passed a no-nudity ordinance, which drew international media coverage.

Nevertheless, by the mid-2000s, mass displays of public nakedness were, if not commonplace in Vermont, at least tolerated. Beginning in 1996, the University of Vermont supported its students' annual Naked Bike Ride, held each semester at midnight on the last day of classes. UVM officially sanctioned the rides until November 2011, when then-interim president John Bramley sent out a campus-wide email saying the school would no longer pony up the $17,000 needed to cover barricades, lights, private security guards, campus police and other event costs.

In his message, Bramley cited safety concerns resulting from past rides, including incidences of sexual assault, overconsumption of alcohol and bicycle-related injuries, which presumably included excessive chafing. Despite Bramley's bum steer, the nude ride still happens, with participation contingent on the temperature.

Two Chittenden County cops who were not authorized to talk to the press summarized their likely response to public nudity and disrobing thus: Discreetly undressing at your local swimming hole before diving in probably won't justify a citation. But performing a striptease on the rocks while wagging your doodle at nearby children will almost certainly get your name added to Vermont's sex-offender registry.