WTF: Why is a boat parked in the woods in Brookfield? | WTF | Seven Days | Vermont's Independent Voice

WTF: Why is a boat parked in the woods in Brookfield? 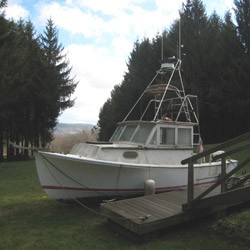 If you’ve ever driven on Ridge Road, the stretch of pavement — and here and there dirt — pitched above the valleys between Brookfield and Randolph Center, you’ve probably seen it: a wooden dock jutting from the road into a clearing in the pines and a Down East lobster boat roped to its end, as if to keep her from drifting down the manicured lawn.

What’s it doing there, hundreds of miles from the ocean?

Rumors abound. Kids in Randolph say the dock owner’s wife died in a boating accident, and this is his take on a memorial. Cartoonist Ed Koren, who lives down the road, dispels that tale. But he warns that land owner Al Wilker and his wife, Vance Smith, are private people; they may not want to share their story.

A sign hanging on the dock’s entrance echoes that sentiment: “Private. Closed for the season.”

But when Wilker answers the phone one recent morning, it’s as if he’s been waiting for the call. And when he and his wife welcome a visitor to their home, directly across the road from the boat, they drop everything to give a full tour.

From the moment you step into their house, impeccably designed and decorated, you know they’re both artists. Smith, 62, a California-born architect, came to Vermont in the ’70s to work with renowned architect David Sellers’ Prickly Mountain crew in Warren. She went on to design woodstoves for Vermont Castings, where she met Wilker, now 64, the engineer who brings her designs to life. Now they run a business together called Red House Design, designing and building woodstoves from their home.

Koren was right about one thing: Vance and Wilker are private. They don’t entertain and rarely leave the property. Neither owns a cellphone. They have a flat-screen TV, but no cable — it’s just there for streaming Netflix on Friday nights.

The couple’s initial explanation of their boat is dismissive. It’s just a folly, Smith and Wilker insist, in the sense of the traditional English garden folly — an object placed whimsically among the plants. They have a bunch of such follies on their property.

Built into a wooden wall beside the garage is a hobbit house, complete with circular door and window. When asked if the door opens, Smith laughs. “No, it’s just totally BS.”

You can’t put hinges on a round door, she explains: “Those hobbits had magicians for architects.”

Farther down the driveway, 300,000 pounds of scrap granite from the grout pile at Rock of Ages have been shaped into an unfinished castle. Marble steps lead up to a stone tower topped with a black and orange flag. The construction is a three-year project, Wilker explains, that will ultimately incorporate a terraced garden, a barn and solar panels mounted on a post-and-beam skeleton. The solar collector will, they hope, power their house entirely.

Why the grand design? “I wanted to reproduce Pergamon,” says Smith, referring to the ancient altar built in Asia Minor. “It’s an attempt to showcase the [solar] panels, which can be so ugly.”

On the walk across the road to the boat, Wilker points out the gold dragon that marks their driveway, part of a Vermont Castings stove Smith designed. The land on that side was a Christmas-tree farm before Smith and Wilker bought the house in 1984. The tall pines stand in tight, perfect rows. Before the couple cleared some of the trees, Wilker says, “The sun didn’t come up till 10 o’clock.”

The boat looks weathered, the dock rickety. One of the wooden seagulls perched on a post is missing its head. A lobster trap — a gift from a neighbor — lies open beside the boat. A pair of pink plastic flamingos hangs out by the pines, as if embarrassed to stand near such a formidable lawn ornament.

The boat was once named Caroline. Wilker bought it in the mid-’80s with plans to fix it up and someday take it out on the water. But years passed, and it was still sitting in the garage. Then, a good friend of the couple’s died — “much too young” — of cancer. “It was one of those events when you get off your ass and live life,” Wilker says. He bought a 36-foot sailboat.

But what to do with old Caroline?

“We built the dock and dragged the boat across the road,” Wilker says matter of factly. “I figure, if I put a smile on anybody’s face, then the world is better. This is too serious of a world.”

These days, when they wander out to their dock after a few beers, Wilker and Smith swear they can make out whitecaps in the grass. “We get to sit here and dream that the tide is rising,” Smith says.