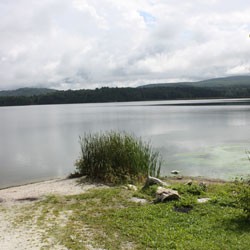 A gentle breeze ripples the surface of Shelburne Pond as a lone mallard preens itself by the water’s edge. Bright green frogs burst from the reeds at the approach of a morning kayaker getting ready to launch. Except for the burble of her paddle as it breaches the surface, the only sound that disturbs the humid August air is the lazy buzz of insects.

Just a dozen miles from downtown Burlington, Shelburne Pond and its undeveloped shores seem hewn from the landscape of an earlier time, before McMansions sprouted like toadstools. For decades, the 1046 acres of pond, woods, wetlands and limestone bluffs have served as a serene getaway for anglers, paddlers, hikers and wildlife enthusiasts — the area is home to 100 bird species alone, fully a third of those found in Vermont. Come winter, skaters often sweep themselves a makeshift rink for practicing their slap shots and pirouettes.

Yet, as one lifelong Shelburne resident observed recently, there’s one recreational activity strangely absent from these waters: swimming. Sure, you’ll spot the occasional black Lab or border collie dog-paddling after a tennis ball near the fishing access. But some law of humanity, or hazard of nature, appears to keep the local populace from wading in for a dip when the mercury rises. Is it a fear of water snakes? Snapping turtles? Leeches? Some other unseen danger lurking in these muddy waters? WTF?

Actually, there’s nothing verboten about swimming in Shelburne Pond, according to Emily Boedecker of the Nature Conservancy of Vermont. Thirty-seven years ago, Hubert Vogelmann, cofounder of the Vermont chapter and a longtime botany professor at the University of Vermont, helped get the pond and its environs set aside for conservation purposes. According to Boedecker, Vogelmann once found a 400-year-old dugout canoe in the pond that had mysteriously floated to the surface.

Today, UVM and the Nature Conservancy comanage the pond and the adjacent H. Laurence Achilles Natural Area to ensure they remain open to nearly all forms of recreation.

“Absolutely, you can swim there,” Boedecker says, “but you probably wouldn’t want to right now.”

Why not? Two reasons, Boedecker explains. First, the pond is pretty shallow — 25 feet at its deepest point — and the water warms significantly at this time of the year. As a result, one set of “hazards” to swimmers, besides the occasional lost fishing hook and line, are algae blooms. Though the toxic blue kind are rare, swimmers are more likely to encounter the slimy green algae that’s difficult to wash off and leaves a funky stink on your car seats on the drive home.

The second reason you don’t see more people doing the backstroke through these waters is that the fishing access and boat ramp are managed by the Vermont Fish & Wildlife Department, which, though it doesn’t officially ban swimmers, restricts parking to boaters and anglers. Since the pond is mostly surrounded by bogs and wetlands, the boat ramp is its easiest point of entry.

Wichrowski says that boaters and paddlers can hop in for a swim, if they so choose, and needn’t worry about encountering leeches. He explains that Shelburne Pond is considered a “eutrophic” body of water, which means its high nutrient levels reduce the water quality and make it an unlikely habitat for the wriggling bloodsuckers.

“Oh, I’m sure there are a lot of water snakes in a pond like this,” Wichrowksi says. In fact, a sign on the kiosk beside the boat ramp implores visitors, “Please don’t kill the snakes.” Another flyer, from the Vermont Reptile and Amphibian Atlas Project, asks visitors who spot or photograph an eastern ribbonsnake or common garter snake to contact the researchers.

But none of those water snakes pose a threat to scantily clad swimmers, Wichrowski says, since Vermont isn’t home to any poisonous aquatic varieties. The only poisonous snake indigenous to the state is the timber rattler, he notes, and that land-bound critter is only found near the southern tip of Lake Champlain.

“They’re pretty rare,” Wichrowski adds. “You’d consider yourself lucky if you found one.”