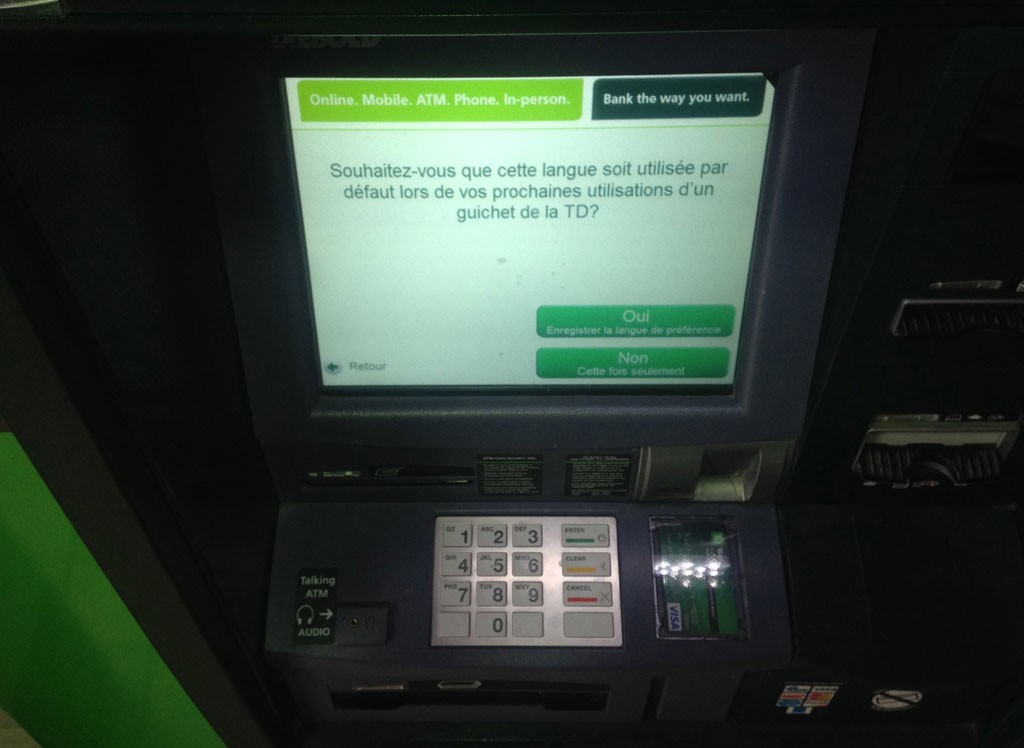 Among the 14 language options on the ATM at TD Bank's downtown Burlington branch is one that few customers are likely to recognize: Shqip. That's the Albanian word for the national language, which is spoken by some seven million people, most of them in Albania.

Yet of the eight banks and credit unions in the city's downtown, only two offer customers the option of reading ATM menus in French, a language that, according to U.S. Census data, is spoken by nearly 10,000 Vermonters. And, of course, by the many Québec natives who visit the state. Nothing against the good people of Albania, but WTF?

According to statistics provided by the Vermont Department of Tourism and Marketing, about 480,000 Québécois spent at least one day in Vermont in 2011, the last year for which data are available. Each of those visitors spent an estimated $219, thus helping contribute a total of more than $105 million to Vermont's economy. To spend that money, some of them probably had to make cash withdrawals at local banks. While many Québécois also speak English, it would seem a no-brainer to have local ATMs offer French as a language option.

Yet when Seven Days surveyed the eight downtown ATMs, we found the word "Français" only twice, at TD and Key banks. "Español" appeared more often — on six of the eight machines — but likely to less purpose. Though Spanish is the second most widely spoken language in the U.S., it has a small toehold in Vermont. In a report on emergency preparedness, the Centers for Disease Control and Prevention found just 1,685 Chittenden County households in which Spanish is spoken. In more than twice that number of households, some or all of the residents were Francophone.

Jeff Dudash is a spokesperson for NCR Corporation, the world's leading provider of ATMs and the software that runs them. Georgia-based NCR does business in 180 countries, Dudash said, so its ATMs are programmed with many different languages. "Ultimately, the bank will make the decision on how many languages it offers on its ATMs," he said in a phone conversation.

Evidence that ATMs can be programmed to "speak" just about anything: Dudash was one of three interviewees for this story who referred to a stunt pulled by British ATM company Bank Machine during the 2012 London Olympics. Cockney rhyming slang was added as a "language" to numerous ATMs around the city.

When it comes to their options, multinational banks have an advantage. Eric Springer, a public relations manager with Toronto-based TD Bank, said that the company made a corporate-level decision to offer 14 languages on all of its ATMs. "We'll add new languages if and when we enter a new geographic region where the primary language isn't one currently offered on our ATMs," he said.

The reason for such a policy is plain: It broadens the bank's customer base. Therese Myers, vice president of corporate communications for Key Bank, said as much, and noted that offering several language options reflects our increasingly multinational culture. Key Bank decided to go trilingual about seven years ago, when it replaced a large number of older machines.

Users of the ATMs in the downtown branches of Merchants Bank and New England Federal Credit Union, by contrast, cannot get past the initial menu without being able to read at least a little English. Why don't other local banks offer more language options?

The problem is not a computational one, said Suzanne Cluckey, editor of the online trade journal ATM Marketplace. "[Adding more languages] is not a terribly difficult thing to program." Cluckey cited an example in her hometown of Minneapolis. As that city's Somali population has grown, local ATMs have been reprogrammed to include the Somali language. Adding languages also does not appear to be cost-prohibitive; some interviewees said it was "not much," while others preferred to withhold that information as "proprietary."

Vermont Federal Credit Union has not added the French language to its ATMs for "no real scientific reason," said Tom Crapo, senior vice president of operations. His facility's ATMs offer just English and Spanish, in large part because the machines came with only those two options preinstalled, and no one has tinkered with them, he said.

Crapo acknowledged that he occasionally hears from customers who'd like to see French (or other languages) added to VCFU's ATM readouts, and he expressed an interest in rectifying the situation. Though he had concerns about crowding ATM screens with too much information, Crapo said, "We can certainly add that, and certainly we should, being so close to the border."

A French option on Vermont's ATMs would seem to make sense — both for the banks' bottom lines and for customer goodwill. Who knows, it could even open the multilingual floodgates. Someday soon, perhaps Vermonters will have the option to interface with ATMs in the languages of the state's increasingly diverse population. For future reference, su rút lui is Vietnamese for "withdrawal."

The original print version of this article was headlined "Why Don't All Vermont ATMs Offer a French Language Option?"