WTF: Why Does the Department of Homeland Security Now Suspect You're Stuffing C-4 in Your 38D to Take Down a DC-10? | WTF | Seven Days | Vermont's Independent Voice

WTF: Why Does the Department of Homeland Security Now Suspect You're Stuffing C-4 in Your 38D to Take Down a DC-10? 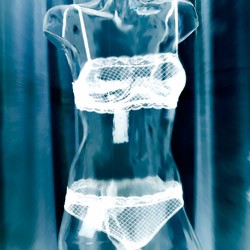 Coming soon to the People’s Republic of Burlington: To board a flight at the airport, you will have to put your package on display for the TSA. Yep, those full-body scanners — aka Nude-O-Scopes and Pornoscanners — are scheduled to land at BTV in 2011. Of course, the freedom-loving feds let you choose just how the TSA violates your Fourth Amendment rights: T&A X-ray or a “pat-down” that may pass third base.

Why does the Department of Homeland Security now suspect you’re stuffing C-4 in your 38D to take down a DC-10? In a Kabuki-paced response to last year’s failed “Underwear Bomber” kids, wheelchair-bound grannies and even flight attendants all face pix and pokes of what were once quaintly called “private parts.” The policy also meshes nicely with former DHS director Michael Chertoff’s multiyear push for the TSA to purchase the $150,000-a-pop scanners from the manufacturer he now represents. Quelle coincidence!

A Honolulu native, I used to fly all the time — when it was easy, even fun. The latest installment of hapless, heavy-handed “TSA Security Theater” makes me want to scream, “WTF?” from the top of Burlington’s air-traffic-control tower. Why should we allow this travesty to unfold in the land of Ethan Allen, Ben & Jerry, and Bernie Sanders, when taking nekkid pix and groping groins doesn’t do a thing to make flying safer?

Evidence abounds that this sorry safety skit is not ready for prime time. In April, University of California, San Francisco, scientists challenged the TSA’s claim that the “advanced imaging technology” machines are safe. “There is good reason to believe that these scanners will increase the risk of cancer to children and other vulnerable populations,” they wrote, recommending rigorous study before the devices were adopted. Last week, Homeland Security’s own inspector general released a report on the complete inadequacy of TSA agent training.

So it’s unsurprising, really, that horror stories are emerging daily since the “enhanced” techniques debuted. Including jaw-dropping reports of rough treatment of medically vulnerable travelers. When medical devices show up on scans, the TSA also subjects these passengers to pat-downs.

During one, the TSA forced a flight attendant and breast-cancer survivor to remove and display her breast prosthesis. During another, an agent dislodged the ostomy bag of a 61-year-old retired special-education teacher and bladder-cancer survivor, leaving him crying and soaked in urine. Have chemotherapy wards and retirement homes become terrorist training camps? What concealed security risks lurk in insulin pumps, adult diapers and penile implants?

I’d already decided to refuse the new scans before I knew I would be getting a tiny titanium marker implanted earlier this week in a breast biopsy. If the lump is benign, the clip stays in place to track its size. God willing, I’m in for a lifetime of false alarms.

According to the docs, the clips won’t set off metal detectors. But I’m guessing they will show up on the Nudi-scans, so I’d have to get “patted” every time I fly anyway. And what if I do have a lumpectomy between now and Christmas? Will a surgeon’s note suffice to inform TSA agents that U Can’t Touch This? To avoid nonconsensual contact, I may just strip down to my Victoria’s Secrets and show my scar. In public. No private peep show. I have nothing to hide; I just want to be with my family for the holidays.

Since 9/11, the U.S. has continued to redefine airline security in reaction to the latest terrorist plot. To fly, we must prove we’re not employing tools of previously foiled evildoers. We have to pitch potentially petroleum-spiked Poland Spring, doff dynamite-concealing Danskos and toss Ziplocked tiny tubes of toothpaste into filthy plastic bins. It’s so yesterday!

Is there a more effective way to ascertain that innocent travelers haven’t joined Al-Qaeda? U.S. Customs and Border Patrol manages it pretty easily every time I return from mom’s house in Québec. During a minute or so of chitchat, the agent assesses my demeanor and credibility. Does a flicker in my Irish eyes mean I have Osama bin Laden in my trunk? Or do I just want to get home to do laundry?

Israel has the world’s toughest airline security. Its core technique is asking simple questions. El Al’s former security chief, Isaac Yeffet, asserts, “The best technology in the world cannot replace the qualified and well-trained human being.” The Israelis interview every passenger, quickly identifying the “99.99 percent who are bona fide travelers,” says Yeffet. Only the few whose answers don’t add up get further screening.

America’s understandable post-9/11 paranoia drives us to seek foolproof technological solutions that simply don’t exist. Burlington should just say no to the scanners, as New York City councilman David Greenfield is proposing to do in the Big Apple. If we don’t draw the line now, next year’s Booty Bomber will have the TSA wanting to administer colonoscopies before every flight.