WTF: Why Do Vermont Hemp Growers Use So Much Disposable Black Plastic? 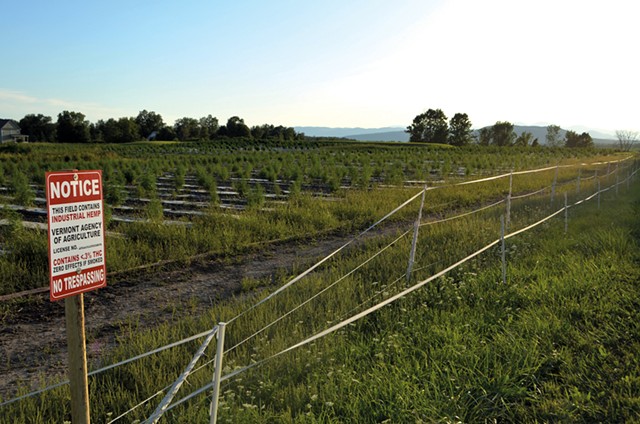 One would be hard-pressed to find an agricultural product more versatile or environmentally friendly than hemp. For centuries, this hearty and fibrous plant, which can grow in diverse climates and soil conditions, has been used to make fabrics, paper, rope, paints, insulation and fuel oil. As a food source, hemp seeds and hemp oil are high in protein, iron and unsaturated fatty acids. The plant grows rapidly without the use of synthetic fertilizers and pesticides, it can sequester more carbon per acre than trees, and it can even be used to purify the soil of industrial contaminants.

In recent years, most Vermont hemp has been grown for production of cannabidiol, or CBD, which is widely used to treat pain, anxiety, depression, insomnia and seizures. CBD is now added to consumer products ranging from roll-on deodorants to dog treats and has fueled the state's recent boom in hemp cultivation. The amount of farmland registered to grow hemp rose from 17 acres in 2014 to 9,089 acres in 2019, according to data from the Vermont Agency of Agriculture, Food and Markets.

However, as an environmentally friendly product, hemp isn't entirely green. Throughout the state, organic and conventional farmers alike use enormous amounts of polyethylene black plastic to help produce it. Then, at the end of each growing season or the start of the next one, the flimsy, trash bag-like film, which cannot be reused, gets ripped up and sent to the landfill. Under state law, it cannot be burned or buried, but inevitably some of the plastic remains on fields and gets plowed under, contaminating the soil and water with leaching from the petroleum-based product.

So why is it used? Black plastic mulch, as the material is formally called, is common in the Northeast and other cold climates to suppress weeds, warm the soil and control erosion, explained Heather Darby, an agronomist with University of Vermont Extension.

Hemp producers aren't the only growers who rely on it — far more black plastic is used in the production of vegetables, she pointed out. But because hemp is a relatively new crop in the state and is highly visible along Vermont's roads, black plastic is most commonly associated with the nonintoxicating cannabis crop.

And, as anyone who routinely orders takeout food has likely discovered, black plastic cannot be recycled in Vermont — or, more accurately, it doesn't get recycled.

"It can be recycled, but, like anything else, we have to have a market to sell it," said Alise Certa, marketing manager at the Chittenden Solid Waste District, which hasn't accepted black plastic in the blue bins for years. "Right now, it's less expensive for manufacturers to create new plastic the way they want it, rather than trying to recycle [black plastic] into something else."

Over the years, several pilot projects have been aimed at recycling agricultural plastic waste, Certa added, including the black plastic mulch on hemp farms and the white plastic film used to wrap hay bales. Thus far, however, none has been financially sustainable.

Surprisingly, black plastic mulch is permitted for use on certified organic farms, according to Nicole Dehne, certification director of the Northeast Organic Farming Association of Vermont, which is accredited by the U.S. Department of Agriculture to certify organic farms. Because pest control is such a major part of organic farming, Dehne explained, there's no regulatory threshold that tells farmers how much plastic is too much.

That said, most organic growers are uncomfortable with how much plastic they use.

"As we learn more about the dangers of plastics, this is definitely being talked about more among the growers themselves," Dehne said.

And, as dozens of new growers entered the organic hemp industry in recent years, she noted, many weren't informed about alternative means of organic weed control beyond covering their entire field in plastic. Those alternatives can include planting wider rows, which provide room for mowing; intercropping, or growing multiple crops together simultaneously; and planting low ground cover that suppresses weeds in the rows between crops.

Because hemp itself can be used to make biodegradable plastics, one would assume that organic farmers, in particular, would have embraced that option. But as Dehne explained, even that concept has been contentious.

Over the last decade, she said, there's been debate over whether organic farmers allowed to use biodegradable plastics will be polluting the soil with other contaminants allowed in such products. The alternative, Dehne noted, is to continue using the petroleum-based ones, which are no better. While the National Organic Standards Board tries to find a workable compromise that addresses everyone's environmental concerns, Dehne admitted that organic producers are left with few alternatives.

One possible solution, noted Darby of UVM Extension, is to use weed mats, which are made of fabric and can be reused year after year. However, they can be costly and labor intensive, and they require storage space.

"I feel like, with the hemp boom, somebody said, 'You should use plastic,' and no one knew what else to do," she added. "Honestly, I don't know any growers who say, 'I love plastic!'"