WTF: Why Do the Trees Planted by VTRANS Keep Dying? 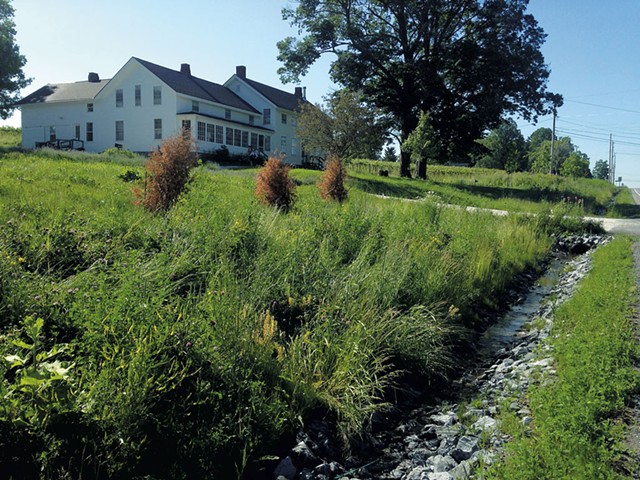 Drivers who regularly travel Route 7 through southern Chittenden County may have noticed a proliferation of dead and dying trees and bushes along a newly widened stretch of the highway. Two readers contacted Seven Days in the last few months to ask why many of the trees and shrubs, which were planted in the past two years as part of a major highway improvement project, are turning brown.

"What's killing all the trees?" asked one reader, who theorized that the roadside trees and evergreen bushes were falling victim to a lethal combination of vehicle exhaust, road salt and a native blight. The other reader speculated that the plants were grown in and purchased from warmer states and thus ill-adapted to Vermont's harsh winters. Whatever the cause, the beige bushes dotting the embankments are considered an eyesore, if not a waste of tax dollars and a reminder of climate change's impact on nature.

In a sense, the work of the Vermont Agency of Transportation, aka VTRANS, is akin to that of journalists: It's highly visible and under constant public scrutiny, and everyone checks your spelling. When done correctly, it often goes unnoticed. But when things go awry, the responsible parties get an earful.

Jane Brown is a landscape architect and a 15-year veteran of VTRANS charged with repopulating roadsides with durable, low-maintenance, aesthetically pleasing plantings. She acknowledged that the trees in question, installed in 2017 and 2018 as part of the $20 million Ethan Allen Highway widening project through Charlotte, haven't fared as well as she expected.

"There's a lot of landscaping on that project," Brown said of the nearly three-mile stretch of road. "Unfortunately, I think a lot of people focus on the problem areas."

According to Brown, many of the affected property owners requested evergreen hedges, including several that were planted very close to the road. Although they look brown from the road, the opposite sides of the trees appear healthy.

"They seem to be suffering from road salt," Brown confirmed. She added that she doesn't want to remove the still-living evergreens, even though "they are a little unsightly." However, she added, she likely won't plant hedges that close to a road in the future.

Affected homeowners often ask the state to plant hedges to muffle road noise, but "it turns out that plants don't provide much of a sound barrier," Brown said. "It's more of a visual barrier." She described her work as choosing "the right tree in the right place."

Some trees she used a few years ago are no longer on her list. They include the American elm, which turned out not to be as resistant to the fungal Dutch elm disease as initially thought.

The climate crisis has also played a role, Brown said, as the state must now consider plantings that are resilient in conditions of flooding and increased rainfall. As she put it, "There seems to be a shrinking number of reliable plants because of the harsh growing conditions."

Another challenge is that VTRANS typically lacks the resources to maintain the landscaping on a project such as the Route 7 widening, funded primarily by federal sources, once it's complete.

As to the theory that Vermont's highways are being repopulated with plants grown south of the Mason-Dixon line, however, Brown put that to rest. Though not all the plantings are grown within Vermont's borders, she said, nearly all are sourced in the region.

The Route 7 project suffered a combination of flora fails, some resulting from the instability of a steep hillside near Ferry Road that had to be rebuilt the following year. In 2018, the state replaced some plants that hadn't survived the winter, but the particularly dry summer conditions called for constant watering. (When trees die within the first year or two of planting, Brown noted, the vendor, not taxpayers, typically foots the bill.) That stretch of road, south of Charlotte Berry Farm, gets a lot of wind off the lake, Brown continued, along with salt spray from vehicles in winter and continuous air movement from high-speed traffic.

In another part of the Route 7 project, four or five maples were infested with insects. "They were all replaced and seem to be doing fine," Brown said.

The replacement saplings offered little comfort to Jim Amblo, co-owner of Tarry-Ho Miniature Horses farm on the west side of Route 7 in Charlotte. As he told Seven Days reporter Molly Walsh in May 2017, the state removed from his property five huge sugar maples that were planted when his family acquired the land in the 1940s.

Though Brown knows mature sugar maples cannot be replaced as quickly as, say, a layer of asphalt or a few dead evergreens, she said she hopes Vermonters understand that VTRANS does the best it can to restore an area's vegetation.

"We're trying to be responsive to people," Brown said. "I'm sorry we lost some of the plants, but, overall, once we get it cleaned up, I think it'll be all right."

The original print version of this article was headlined "Why Do the VTRANS Trees on Route 7 Keep Dying?"