WTF: Why Do Local Radio Stations Play the Same Songs Over and Over? | WTF | Seven Days | Vermont's Independent Voice

WTF: Why Do Local Radio Stations Play the Same Songs Over and Over? 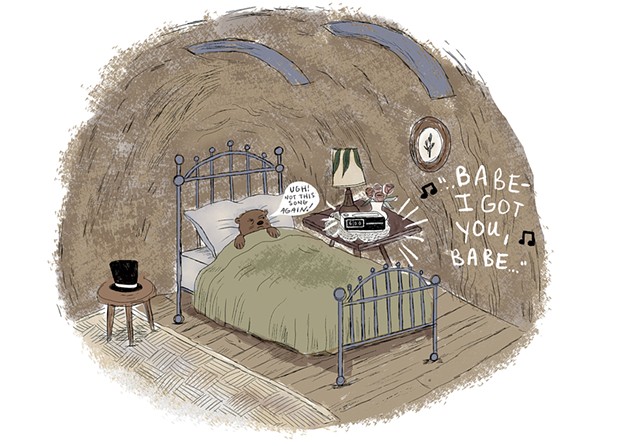 Listening to music on commercial FM radio can feel like Groundhog Day all year round. And it's not just Sonny and Cher's "I Got You Babe" that calls to mind Bill Murray living the same day over and over. On Vermont's classic rock stations, songs such as the Rolling Stones' "Start Me Up," Heart's "Crazy on You" and Queen's "Bohemian Rhapsody" get so much airplay, one would think that these artists had few other hits.

Yet would any fan of the Stones, who recorded more than 400 songs, include "Start Me Up" on their top-10 list? Listeners can catch "Satisfaction," "Sympathy for the Devil" and "Brown Sugar" five days a week, while "The Spider and the Fly" and "Hand of Fate" go unheard. Two years into the pandemic, why hasn't some DJ resurrected the 1972 release "Ventilator Blues"? Too soon?

The playlists aren't much more diverse at Vermont's adult-alternative stations, where the choice of Eurythmics songs seems to be between "Sweet Dreams" and "Would I Lie to You?" Whenever a local DJ teases a Tracy Chapman song, you can bet your favorite vinyl it'll be "Fast Car" or "Give Me One Reason." Not to disparage the four-time Grammy winner, but you can't give me one reason not to turn the dial when those songs come on.

Why isn't local radio programming more innovative? A lack of competition certainly isn't the problem. This is an era when music enthusiasts have a wealth of listening alternatives — satellite radio, streaming services, YouTube, TikTok and their own digital libraries.

In a January 6 blog post titled "Why Radio Just Shot Itself in the Foot," Fred Jacobs, president of the consulting firm Jacobs Media Strategies, wrote about how SiriusXM satellite radio became one of the nation's largest advertisers on AM/FM stations, effectively stealing their audience out from under them. "Terrestrial radio is still the 800-pound gorilla in the room," Jacobs wrote, accounting for nearly 40 percent of all audio consumption, but it's been steadily losing market share to newer technologies.

But if you're waiting to hear deep cuts or acoustic or alternative versions of your favorite artists' songs on FM radio, you'd best follow the advice of Aerosmith's Steven Tyler — dream on.

For insight into the local broadcasting biz, we talked with Mike Luoma, a 40-year veteran of Vermont radio who got his start at WWPV the Mike, the student-run station at Saint Michael's College. Since 1987, he's held various commercial radio jobs, including that of music and program director at WIZN, Champlain Valley's classic rock station. From 2006 to 2018, Luoma worked at WNCS the Point Independent Radio. Since then, he's hosted on WBKM, a Burlington-based internet station.

Why, we asked him, do so many local stations have such a limited song selection?

Luoma explained that it all boils down to risk aversion. For-profit radio stations must keep listeners tuned in through the ads, which pay the bills. So the music they choose is "safe, familiar and well tested."

Back in the '90s, Luoma said, WIZN did a lot of music research. In those days, the top-performing song with listeners was always "Carry On Wayward Son" by Kansas. If you listen to WIZN today, he said, you can probably figure out which songs made the current list. (I'm looking at you, "Layla," "Lola" and "Kashmir.")

Things were different during Luoma's stint at the Point, he said. Instead of running tests, that station relied on consultants who looked at what stations with similar formats in larger markets were playing. Those consultants also helped program WXRV the River, a Boston-area adult album station, which, like the Point, is owned by Northeast Broadcasting.

"The argument used to be that radio provided promotion for [new] artists, and in the case of WNCS, that is still true," Luoma said. "But in a larger sense, catalog music is a balm being used by commercial radio stations to soothe you through commercials.

"They're not playing music [that] people who love music want to hear," he added. "They're playing songs everyone will listen to."

We spoke to another longtime Vermont radio DJ who asked not to be identified because he wants to keep his job. He bemoaned that local DJs have little say over what they play.

At many FM stations, he claimed, "The DJs don't get to pick a single song, ever." Why not? Because most listeners "don't have tolerance for music they don't know."

Not everyone in Vermont's radio scene agrees with such claims. Kevin Mays is program and music director at WIZN and its sister station, WBTZ 99.9 the Buzz. He explained via email that both stations use music-scheduling software to set up their daily playlists, as is standard in the industry. However, he wrote, unlike stations owned by large corporations, WIZN and the Buzz curate all their music locally from their own library. (None of the country's four largest radio conglomerates — including iHeartMedia, which is notorious for repeating songs ad nauseam — owns stations in Vermont.)

Mays said DJs have "a little freedom" to play listeners' requests and to highlight an artist's birthday or death, as was the case on January 20 when Meat Loaf died. Mostly, though, what airs comes from the daily playlist.

"I wouldn't agree that the Buzz is risk averse," he added. "We play more new music and emerging artists than most commercial alternative radio stations across the country, and we have several other outlets for new music discovery, including five hours a night on our [syndicated] evening show, 'Alternative Soundcheck.'"

As for the classic rock fallbacks in heavy rotation on WIZN — think "Free Bird," "More Than a Feeling" and "You Shook Me All Night Long" — Mays said more than 40 years of rock programming have honed the audience's preferences.

"Since our job is to attract as many listeners as possible," he said, "we tend to lean on the ones they really want to hear."

You make a grown man cry. I stand corrected.