WTF: Why Do I Still Feel (Relatively) Young at Classical Music Concerts? 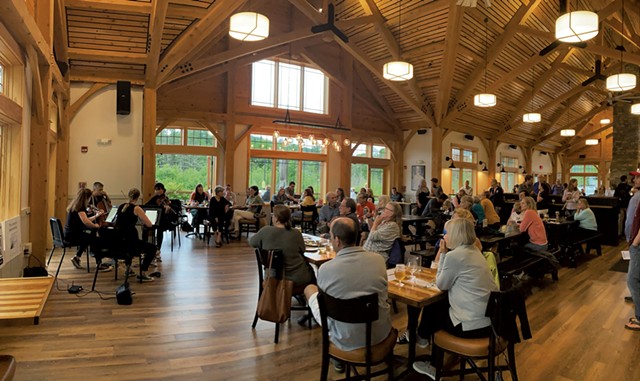 About 20 years ago, my husband and I started going to University of Vermont Lane Series concerts in the UVM Recital Hall. Far from classical music aficionados, we were drawn by the diverse styles on offer, from chamber quartets to global music.

It was also a welcome reprieve from noisy life with two young sons. We would settle into our plush seats in the striking concrete and wood hall and let the notes fill our ears and minds with something different from our daily soundtrack.

Back then, when we were in our thirties, we would occasionally note how young we were compared with the bulk of the audience. Now, in our (ahem) advanced middle age, we still feel relatively youthful at many of the concerts.

Over the years, I've heard about the age "problem" faced by classical music presenters whose patrons consist predominantly of the Social Security set. My anecdotal experience bears that out — even at concerts held on a university campus with $5 student tickets.

If a presenter like the Lane Series can't draw younger audiences, I wondered, will classical music die when its white-haired fans move on to heavenly harp concerts?

Or is there always a new cohort of gray-haired people in the wings? To put it another way, is appreciation of Johann Sebastian Bach concertos something you age into, as my father-in-law always said about drinking Scotch and voting Republican?

I reached out to local classical music presenters for their thoughts on this perennial topic. How are they finding new ways to expand their audiences?

"Classical music definitely skews older," Lane director Natalie Neuert confirmed. "I would say 50-plus, but there are a lot of people in their seventies and eighties." New generations do "graduate in" as they find themselves with more time and capacity for sitting still, Neuert added. Many people "need to grow into this music," she said. "That's even more true now because of the distractibility of contemporary life."

While music presenters said they value their older patrons, they are working hard to diversify their audiences by age and other attributes.

"Every single classical organization is looking at how they evolve and how they adapt in order to maintain their connection to their communities and maintain their relevancy as an art form," said Matt LaRocca, creative projects chair of the Vermont Symphony Orchestra.

That evolution isn't just about marketing; it's also about changing how music is presented.

A first step is to acknowledge what Neuert described as classical music's "feeling of elitism." To bring in new listeners, she said, "we need to figure out ways to be inclusive and welcoming and to create an environment where people don't feel intimidated."

Neuert said she tries hard to book artists who not only are exceptional musicians but also counter the "serious classical" stereotype.

Pianist Michelle Cann, who will perform in the Lane Series on November 19, for example, "is super friendly and outgoing," Neuert said. Cann, who is Black, will perform a program including Frédéric Chopin and Johannes Brahms, as well as compositions by pioneering Black composers Florence Price and Margaret Bonds.

Presenters are also radically changing up the settings of their performances.

Marshfield-based Scrag Mountain Music has played George Frideric Handel and Jean Sibelius in grocery stores and barns. Its motto is "Come as you are. Pay what you can." The weekend of September 11, Scrag Mountain partnered with New Music on the Point to premiere composer Eve Beglarian's "A Murmur in the Trees" for 24 bassists. Performances were held outdoors, literally among the trees, in Brandon and Montpelier.

In July, Waterbury Center's contemporary chamber music presenter TURNmusic premiered a work by Otto Muller in the Goddard College gardens in Plainfield. According to its website, TURNmusic aims "to present professional music concerts in a relaxed venue" with "affordable ticket prices."

The VSO Jukebox Quartet is probably the highest-profile local example of classical artists performing in nontraditional venues. The chamber concert series launched five years ago at ArtsRiot in Burlington, where rock bands normally play against a backdrop of graffiti-style wall art. Patrons are invited to "pay what you will" with a suggested sliding scale of prices.

Jukebox is about "breaking 100 years of stuffy tradition," LaRocca explained. "When you say 'Beethoven' to a younger audience, or 'Mozart,' or 'insert any classical composer,' there are 18 million different preconceived notions."

The series was created to blow up those notions. Informal, sip-as-you-listen performances of diverse, shorter pieces give audiences more ways to understand what a classical music concert can be, LaRocca said.

"It feels a lot more like you went down to the neighborhood bar and caught the band," he said. "You don't feel that you have to act in a certain way or be a certain way just to be part of this world."

Jukebox not only successfully sells out ticketed concerts but seems to appeal to classical fans of all ages, LaRocca said.

"There are people in their seventies and eighties enjoying the show just as much as people in their twenties and thirties," he said happily. "I want it to be a concert that has every shade of hair color imaginable."