WTF: Why Do Honeybees Swarm? 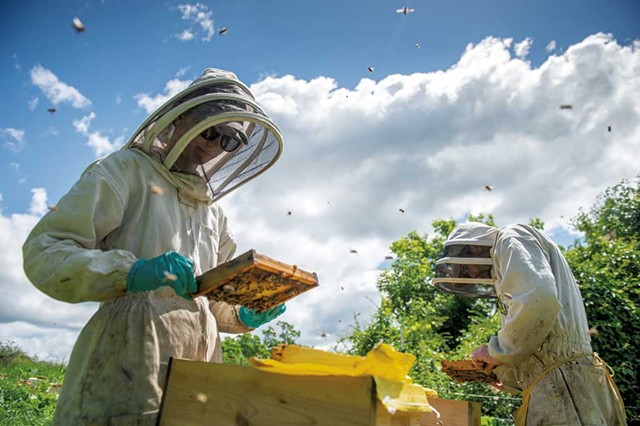 To the uninitiated, a honeybee swarm can resemble a scene from a horror movie: Hundreds, sometimes thousands of insects swirl through the air like an angry tornado or clump together like a buzzing beach ball on a tree limb or fence post. Swarms appear seemingly out of nowhere, then disappear within hours or linger for a day or two. If one lands somewhere you need to be, such as your front porch, it can be downright intimidating.

Local beekeepers are reporting more swarms this year than in 2020, and some are even offering their swarm-removal services on social media. Is it time to worry?

The good news: Unless you're highly allergic to bee stings or provoke the bees, swarms are harmless. They usually depart on their own — unless they set up shop inside a shed or garage, in which case they may require professional removal.

And, perhaps more importantly, swarming is actually a sign of good health in the apian world. Why do bees swarm? Simply put, it's nature's way of propagating new colonies — and sometimes new beekeepers, too. (More on that later.)

First, some honeybee basics courtesy of Andrew Munkres, owner of Lemon Fair Honeyworks in Cornwall and president of the Vermont Beekeepers Association. Munkres explained that bee colonies are considered "super-organisms," meaning that they're akin to a single entity, despite being composed of individual bees. To reproduce individuals, the queen lays eggs, which hatch into worker bees. But the colony can also reproduce itself collectively by undergoing colony division, or swarming.

Honeybees swarm when the colony has outgrown its living space, Munkres said. Though one might assume the queen decrees when to divide, "It's kind of like a Bernie Sanders thing. The workers are in charge," he said. "They're the proletariat."

When the worker bees decide it's time to swarm, they encourage the queen to stop laying eggs so she loses enough weight to be able to fly again and leave the nest. The workers then build special swarm cells where larvae will grow into new queens to be left behind when the colony divides. Ultimately, only one will take over the old colony.

As the colony prepares to swarm, the workers fill the combs with honey to ensure that the bees left behind and their new queen have enough food to survive. Then, on a nice, sunny day — generally between 10 a.m. and 2 p.m., Munkres noted — the workers signal that it's time to leave. The bees form a cyclone outside the hive, then cluster on a branch or structure several yards away, which becomes their staging area.

From there, scouts go searching for a new home, evaluating sites based on their proximity to food, cavity volume and entrance size. The entrance must be large enough to admit the bees but small enough to keep out predators, such as skunks and bears. An ideal cavity is about 10 liters in volume, 12 to 15 feet off the ground and facing south, Munkres said.

As each scout returns, it performs a dance that tells its fellow bees about the features of the prospective new cavity. Munkres likened the process to a Vermont town meeting in which someone stands up and proposes a new salt shed.

Different scouts dance simultaneously to tout the sites they discovered, each bee making its case. Excited scouts recruit other scouts to go check out their sites. If those scouts return equally enthusiastic, they'll dance about the prospect, too.

A consensus requires that the vast majority of scouts be dancing to the same tune, Munkres said. If they can't reach one, then "That's when the selectboard can't decide where to build the new salt shed, and the democratic process grinds to a halt."

Assuming, however, that the bees agree on where to put down roots, the swarm leaves the staging area and flies to its new home. The bees move in and start building combs, the queen lays eggs again, and the process begins anew.

A healthy colony can swarm several times a year. However, with all the problems now plaguing honeybees — such as Varroa mites, colony collapse disorder and toxicity from pesticides containing neonicotinoids — beekeepers are noticing fewer and smaller swarms than they once did.

"It used to be something you saw every summer," Munkres said. "Now there are probably Vermonters who've never seen a bee swarm hanging in a tree."

Occasionally, bees do something that resembles swarming called absconding, which is a defense mechanism against environmental stressors such as drought or disease. In those circumstances, Munkres said, the bees don't leave behind half the colony or a replacement queen. They just skedaddle in the hope of escaping their problems.

The Vermont Beekeepers Association's website has a geographical list of beekeepers who are willing to remove swarms, usually free of charge. One who's not on the list but regularly offers that service on Front Porch Forum is Austin Wright of South Burlington.

Wright, who's been a backyard beekeeper for about a decade, said he's received one or two calls a week all spring. He will travel as long as an hour to remove a swarm.

"Sometimes when I get there, people are scared. But then they see me go in there with no suit, no veil, nothing, and they're amazed that I'm not getting stung," he said. "Then they get interested, and before you know it, they're creeping closer and right in there with me."

A few people are so fascinated by the process that they ask Wright whether they can keep the bees themselves. He said he's gotten at least 10 people into backyard beekeeping this way.

Proof positive that there's always a new way to catch a buzz.