WTF: Why Do Cemeteries Require Urn Vaults for Burying Cremains? 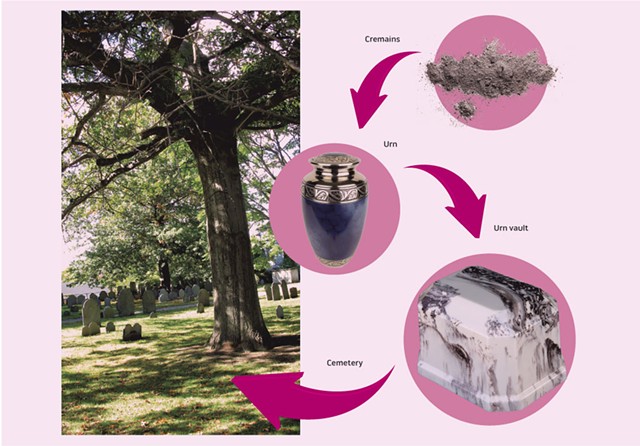 "By the sweat of your brow you will eat your food until you return to the ground, since from it you were taken; for dust you are and to dust you will return." —Genesis 3:19

This Old Testament quote may serve as a reminder of the fleeting nature of a human life, but some Vermont cemeteries require a bizarre burial practice that seems designed to delay the "ashes to ashes, dust to dust" process for as long as possible.

Consider the case of a Berlin woman, whose mother's cremated remains, aka cremains, were interred earlier this month in a family plot in Burlington's New Mount Calvary Cemetery. According to the woman, who requested anonymity, the cremains were buried in an urn. Still, the family was required to purchase an urn vault, too.

"The urn vault cost $900 on top of the price for the urn," she wrote in an email, which also included a copy of her itemized bill from Ready Funeral and Cremation Services in Burlington. When the woman questioned the charge — she claimed that her sister had selected the least expensive option — the funeral director informed her that urn vaults are mandated by the Catholic cemetery, which is owned by St. Joseph Parish of Burlington. A check of the cemetery's website confirmed this requirement.

"This all seems out of line and wasteful of money and materials," added the woman, whose mother's prepaid funeral contract didn't cover this added expense. "Prohibiting someone's ashes from natural decomposition serves no useful purpose."

No ecological purpose, that is. From an economic standpoint, it makes perfect sense for an industry whose customers are increasingly choosing less costly ways to shuffle off their mortal coil.

To dig into the matter, we contacted Josh Slocum, executive director of the nonprofit Funeral Consumers Alliance, a national funeral industry watchdog group. FCA, which is headquartered in South Burlington and has affiliates in 46 states, is dedicated to safeguarding the rights of consumers to dignified and affordable funerals.

When it comes to outrageous abuses of consumers, Slocum has heard it all. Whenever, say, a body goes missing from a funeral, or a casket explodes in a mausoleum because someone forgot to crack and "burp" the airtight coffin before its interment, he's often the one who fields the phone calls from distraught and irate family members.

Slocum isn't easily shocked, but the $900 price tag for a metal container that's just large enough to hold five pounds of ash and pulverized bone knocked him back in his seat: "Nine hundred dollars," he said, "is into absurd territory."

Indeed, an online search for urn vaults turned up a wide range of prices, from $79.99 for an economy version to a solid copper one that sells for $1,360 — no small chunk of change for a box to hold another box in a hole. When asked why cemeteries require them, Slocum didn't hesitate before answering.

"Money, unequivocally. They serve no practical purpose," he said. "They are merely a device to get money from people who are not buying the full-sized concrete coffin vault."

Coffin vaults, Slocum explained, primarily ease the maintenance of cemetery grounds. Over time, every coffin will deteriorate and collapse, because it holds a body in an air bubble six feet down. Because heavy mowing equipment is routinely driven over the grave, coffin vaults prevent the ground from caving in.

Slocum has spoken to countless cemetery directors around the country. Invariably, they tell him that urn vaults serve the same purpose; indeed, when the Berlin woman inquired, she was told the same thing. Some cemetery directors further justify urn vaults by saying that they allow families to find the urn in case they decide later to disinter the ashes, a justification Slocum called "nonsense."

What's really behind this push to entomb cremains inside the equivalent of Russian nesting dolls? In short, the financial plight of cemeteries. According to the Cremation Association of North America, the U.S. cremation rate in 2017 was nearly 52 percent, up from 34 percent a decade ago. Vermont's 70 percent cremation rate is among the nation's highest.

Simply put, cemeteries are built on an outdated business model, Slocum said. When their only products are graves, and they're either running out of them or not selling them as briskly as they once did, the income stream to cover their maintenance costs dries up.

In fairness, Slocum doesn't completely fault funeral directors and cemetery owners. He also puts some of the onus on consumers, who often fail to read the fine print on prepaid funeral contracts. Nearly all stipulate that the consumer has paid for the right to be buried in a specific plot, not the cost of opening or closing the grave — nor the cost of a burial vault.

Are there cheaper and eco-friendlier burial options? Surprisingly, tree-hugging Vermont has yet to open a green cemetery, according to Michelle Acciavatti, cofounder and president of Green Burial Vermont. That said, some traditional cemeteries now offer "natural burial" sections, which may be headstone-free and eschew wasteful, toxic and unnecessary processes such as embalming the dead, pesticide use and mowing. Some allow biodegradable caskets and shrouds and bury the body in shallower graves to hasten decomposition.

Another eco-friendly option is reusing and recycling one's body as an organ donor or leaving it to science through the anatomical gift program of the Larner College of Medicine at the University of Vermont. The latter is a very affordable option, because when the medical students are done with the cadaver, the college picks up the tab for cremation — though not, presumably, the urn vault.