WTF: Why Are Some People Called for Jury Duty While Others Never Are? | WTF | Seven Days | Vermont's Independent Voice

WTF: Why Are Some People Called for Jury Duty While Others Never Are? 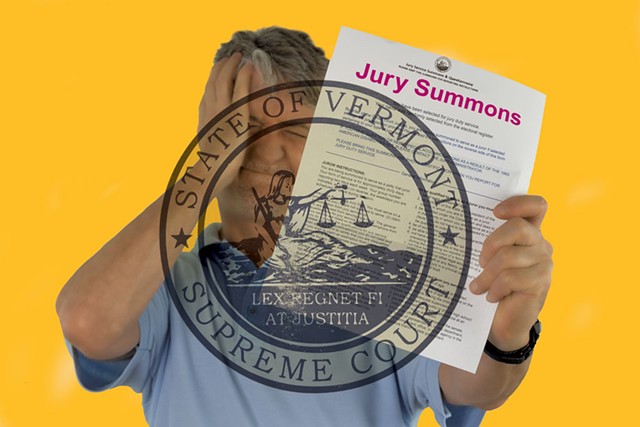 Vermont's most celebrated poet, Robert Frost, once wrote, "A jury consists of twelve persons chosen to decide who has the better lawyer."

It's unclear how much time, if any, Frost himself spent adjudicating attorneys' acumen. But the Ripton rhymester was known for his fondness for democracy. Frost famously penned a poem for president John F. Kennedy's 1961 inauguration, which he never recited because the sun's glare off the snow was too bright for his eyes. Assuming Frost was a registered voter, he was among Vermonters eligible to perform that sacred civic responsibility that originates in the U.S. Constitution's Sixth Amendment: jury duty.

Never been called for jury duty yourself? One Seven Days staffer recently bemoaned the fact that she's been summoned four times since 2012, including serving on the jury for a one-day trial. The frequency of her jury summons far exceeds that of anyone else on staff. An informal office survey found that most staffers had never been called.

WTF? Is jury duty like an allergic reaction to a bee sting — after it happens once, you're more predisposed to future episodes? Or is it more like a roulette wheel in a casino — seemingly rigged but actually governed by the laws of probability?

First, some basics on how jury duty works in Vermont. Joanne Charbonneau, clerk of the statewide courts, explained via email how the jury summons process functions in state court. (The rules for selecting federal juries are fundamentally the same as those for state courts.)

Vermont's prospective juror list comes from city and town voter checklists and from the state Department of Motor Vehicles' drivers list. As Charbonneau explained, names are randomly selected by computer, and jurors are called to serve only in the county in which they live.

To qualify, jurors must be at least 18 years old, U.S. citizens, and able to read, write, speak and understand English. Convicted felons who have served prison time are ineligible, as are those who are physically and/or mentally incapable of jury service.

Additionally, jurors cannot serve more than three times in a two-year period. The number of days one actually spends in the courthouse varies depending on numerous factors. They include the court's workload, the number and length of trials, and the potential long-windedness of attorneys.

According to Charbonneau, most jurors serve no more than 10 days in either criminal court — to determine guilt or innocence in cases such as DUIs, larcenies and assaults — or civil court. The latter is where you sue your neighbor after his dead poplar, which you've nagged him for years to chop down, finally blew over and took out your Prius.

Citizens also serve on grand juries, which handle more complex and serious (read: interesting) cases than do petit (criminal and civil) juries. These proceedings are confidential and are argued by the state's attorneys or the attorney general himself. Grand juries don't determine guilt or innocence but decide whether probable cause exists to bring charges.

"People are only disqualified if they don't meet the qualifying questions," she wrote. "If someone from one of these professions gets randomly selected as a potential juror for a case, it's up to the attorneys involved in the case to remove them from their panel during the voir dire [jury selection] process."

Does that mean everyone who gets called must serve? Nope. According to Charbonneau, the most common, and legit, requests to be excused are for medical necessity (either for oneself or as the caregiver for others), for financial or workplace hardships, or due to previously scheduled vacations. Charbonneau noted that the court may ask for documentation: You must already have purchased those tickets to Disney World before your jury summons arrived.

Still averse to being one of 12 angry men or women? The internet is awash with advice for getting out of jury duty. They include everything from the reasonable — you're a student or a freelancer, or you lack daycare for your kids — to the sketchy: presenting yourself as stubborn, stupid, argumentative or racist. When all else fails, there's always the late George Carlin's suggestion: "Tell the judge ... you'd make a terrific juror because you can spot guilty people [snaps his fingers] just like that!"

One ill-advised scheme for escaping jury duty is not showing up. Failure to appear can earn you a place in front of a judge rather than beside one, plus a $200 fine. However, Charbonneau noted that most judges ask delinquent jurors to return for jury duty another day before throwing the book at them.

Is the experience of our Seven Days staffer a computer-generated fluke? Evidently, Charbonneau suggested. It's worth remembering that, if you flip a coin 49 times and it always comes up heads, your 50th toss still has a 50-50 chance of being heads.

Many people feel apprehensive or annoyed about this disruption in their daily schedules, especially given the meager compensation — $30 per day for state court, $50 for federal court. And why is this money considered taxable income? The jury is still out on that one.

But consider embracing, rather than shirking, this civic obligation. According to the Center for Jury Studies, research has shown repeatedly that, after serving on juries, citizens were more knowledgeable about, and had more positive views of, the entire legal system. There's also evidence that those who served were more likely afterward to engage in other civic duties, such as voting.

In this age of rampant cynicism about government, that's a persuasive argument for doing one's duty.

The original print version of this article was headlined "Why Do Some People Get Called for Jury Duty but Not Others?"