WTF: Why Are More Postal Carriers Working on Sundays? 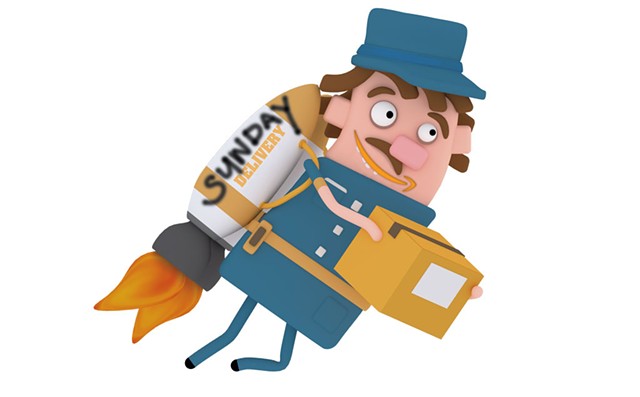 There was a time when "neither snow nor rain nor heat nor gloom of night" stayed postal couriers from the swift completion of their appointed rounds — except on Sundays. For much of the modern history of the U.S. Postal Service, Sunday was the day of rest, allowing mail carriers time to attend religious services, mow the lawn, catch up on laundry or watch professional football. It also gave Americans a much-needed reprieve from the daily onslaught of bills, political flyers, unwanted catalogs and bulk-mail charitable pleas that clog their mailboxes.

However, if you've spotted an increasing number of postal peeps out and about on this once-hallowed day, you're not alone.

What's driving the uptick in Sunday postal activity? Is it Vermont's status as the least religious state in the Union? The lack of a local National Football League franchise? Less laundry to do in winter?

None of the above. One word explains why some of Vermont's postal workers aren't making it to Sunday mass or catching Tom Brady's end-zone completions on TV: Amazon. The world's largest internet retailer is keeping the state's postal trucks rolling on Sundays as the mammoth online retailer gobbles up a heaping helping of the home-delivery market.

"We've been doing [Sunday delivery] for some time now, but there's definitely been an uptick in the packages and people ordering things on an overnight basis," said Steve Doherty, communications specialist for the USPS in Boston, whose territory includes Vermont.

Doherty explained that when the public sees carriers working on Sundays, they're usually not packing bills, circulars or magazines. Rather, deliveries that day are reserved for guaranteed overnight delivery of USPS priority express packages, or similar guaranteed shipments for other companies, especially Amazon.

Doherty wasn't at liberty to say how much of the postal service's Sunday traffic comes from Amazon, but according to the company's own data, 40 percent of its packages are now handled by the USPS. By all accounts, that trend is likely to continue — at least until Amazon gets its drone fleet off the ground.

If additional delivery seems burdensome to the men and women in the postal-blue pinstripes, it's worth noting that mail-free Sundays are not a tradition dating back to the founding of the U.S. Post Office in 1775. As historian Claude Fischer points out on the blog Made in America: Notes on American Life From American History, Sunday mail was not only commonplace in the early days of the republic, it was required by Congress in 1810. In those days, the U.S. Mail was the primary vehicle driving American commerce, delivering newspapers, transmitting important financial documents and allowing farmers, tradespeople and manufacturers to stay apprised of the happenings in distant markets.

It wasn't until the 1820s, Fischer notes, that church leaders, especially New England ministers, campaigned to close post offices on Sunday. Why? They believed that requiring postal workers to conduct business on the Christian Sabbath compromised their religious integrity. Also, post offices weren't as wholesome then as they are today.

"In some communities," Fischer writes, "the post office was the only place other than church that was open on Sundays, so men would rush there as soon as the mail had arrived, staying on to drink and play cards."

And we postal geeks thought it was exciting when the USPS issued stamps commemorating Janis Joplin or Star Wars.

According to Fischer, the fight over Sunday mail delivery flared up repeatedly in the 19th century. Yankee ministers weren't successful in their no-Sundays campaign until they found the right ally: organized labor, which was also lobbying for a weekend day off for workers. In 1912, Congress finally ordered that post offices close on Sundays.

With few exceptions, that congressional mandate endured for more than a century. Then, in November 2013, the USPS announced that it had struck a deal with Amazon to deliver its packages on Sundays, beginning in a handful of major U.S. cities. The service was later expanded to other regions and is now available in most places, including Vermont.

That agreement hasn't been without controversy. Late last December, President Donald Trump tweeted, "Why is the United States Post Office [sic], which is losing many billions of dollars a year, while charging Amazon and others so little to deliver their packages, making Amazon richer and the Post Office dumber and poorer? Should be charging MUCH MORE!"

Trump was likely referring to the USPS' reported net loss of $2.7 billion in fiscal year 2017 — and taking a swipe at his nemesis, Amazon founder and CEO Jeff Bezos, who owns the Washington Post. Other observers have argued that Amazon is actually helping to keep the USPS, if not in the black, then at least less in the red. In December, Alison Griswold wrote on the website Quartz that shipping and packages were "a rare bright spot" for the postal service last year, generating 12 percent more revenue than the previous year.

What is Amazon's impact on Vermont's mail carriers? Doherty acknowledged, "The additional volume does put a strain on and cause us to flex our resources and move people around and shift our operations. But that's what we do," he continued. "That's what we're here for ... If people are willing to pay a premium to get their packages delivered on a Sunday, we're happy to accommodate them."

How do the carriers themselves feel about clocking in on Sundays? No one from the American Postal Workers Union's local chapter or national headquarters responded to our queries. Guess they're too busy delivering boxes of miscellaneous merch for Amazon.