WTF: What's With the Dome-Topped Mansion on St. Paul? 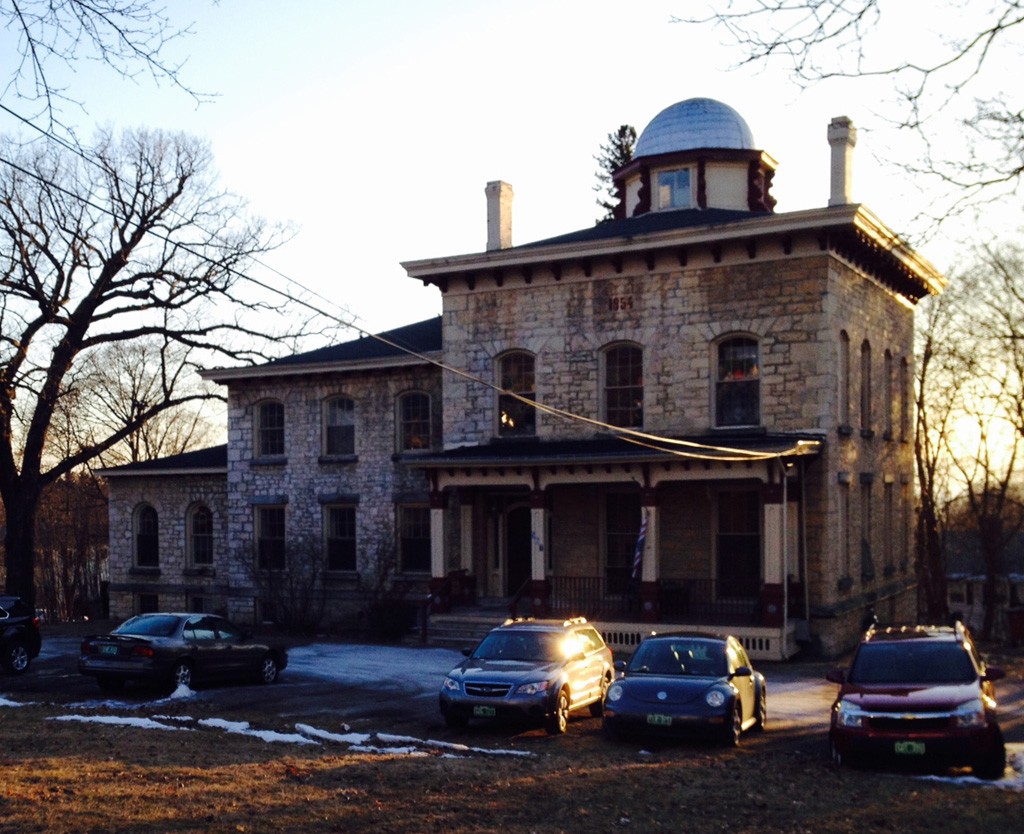 Ever notice that handsome stone apartment house situated on a large lot on Burlington's St. Paul Street near the South End roundabout? It appears to have an astronomical observatory on its roof. WTF?

Yes, that's exactly what the place is — or rather, was.

The 161-year-old Italianate building has an exterior of quartzite quarried from ledges on what's now South Willard Street. It was constructed for Dr. William Hickok, a Burlington native born in 1802 who made a fortune tending to the health issues of wealthy New Yorkers. He returned to the Queen City as a retiree in 1850 and, four years later, built the 14-room home that became known as the Hickok Stone House.

According to the Historic Guide to Burlington Neighborhoods, Doc Hickok spent the last three decades of his life engaged in his hobbies: astronomy and conchology. He assembled a large and valuable collection of seashells that was donated to the University of Vermont following his death in 1883.

The rooftop observatory, which takes the place of the cupola associated with the Italianate architectural style, contained a telescope 6.5 inches in diameter that could magnify objects up to 400 times. It was, in its day, the largest telescope in the state of Vermont, notes the 1991 edition of the Burlington neighborhood guide written by David J. Blow and published by the Chittenden County Historical Society.

Hickok must have had a fabulous view of the heavens in the pre-electric-light era. And the land surrounding his home was largely undeveloped in the second half of the 19th century.

The house passed to the doctor's son, Horatio, who lived there with his family and his father's widow, Laura Ann Platt. In 1925, Burlington grocer and developer Paul Kelley purchased the property. The house at that time was part of a 20-acre parcel, through which Kelley cut Margaret, Marion, Ledgemere, Charlotte and Caroline streets. He sold house lots in the area that's today known as the Five Sisters neighborhood.

But it wasn't named after any offspring of Kelley's — and is, in fact, something of a misnomer. According to a 2008 City of Burlington survey, Caroline, Charlotte and Catherine (originally Katherine) streets were all named for daughters of Edward and Maria Buell Hungerford, who had also developed the area. Margaret Street was named for Kelley's wife, while Marion — also referred to as Marian — Street was "most likely named for one of [Kelley's] nieces," the survey states. The couple did not have children.

Let's return to the observatory: The telescope was removed some time after Hickok's death and before Kelley's 1928 conversion of the building into a summer-season hotel. The Hickok Stone House was remodeled in 1946 as a set of apartments that included the former observatory.

About 20 years ago, Paul Handy, who had purchased the building in the 1980s, sealed off the wood-domed space and an identically proportioned space immediately beneath it. "There's only one egress from up there," notes Joe Handy, who acquired the house 10 years ago following the death of his uncle Paul. "The city's code says there has to be another way out, but it's a historic building, so it would be hard to build an outside fire escape."

A tenant supplies a key to the padlocked door, and Seven Days climbs a spiral staircase to find a four-windowed circular space with panoramic views of Lake Champlain and the South End. Plaster and wood debris are scattered on the bare floor, and a few slats are missing from the dome. A fix-up to make the space compliant with the city's fire code would result in a spectacular aerie.

The rest of the structure's interior appears to be in fairly good shape, considering its age. Joe Handy says he "completely renovated" the building, replacing its roof and installing new pipes and wiring. But tenants of three of the 10 apartments — none of whom was willing to be named — complain that their units need at least cosmetic improvements.

Burlington code enforcement director Bill Ward says the Hickok Stone House has no outstanding violations. Handy responded promptly to a clogged drain in one of the apartments in 2011, Ward reports. The Hickok place was last inspected in 2013. "It met the minimum housing requirements," Ward says, adding, "That's not a very high bar."

While the building may no longer be a stately Victorian mansion occupied by a single family, Hickok's observatory still towers over the Five Sisters neighborhood, a memorial to his stargazing in an age gone by.

The original print version of this article was headlined "What's With the Dome-Topped Mansion on St. Paul?"