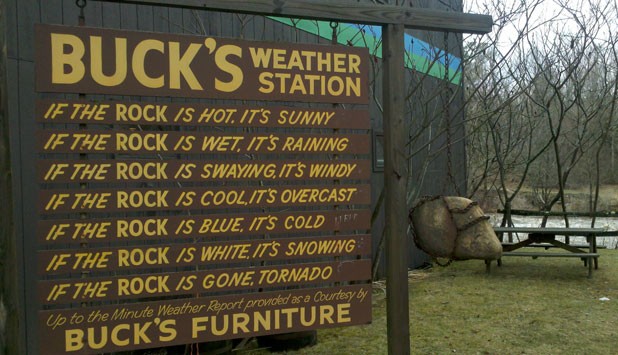 If you take Route 15 toward Hardwick, it’s hard not to notice the tangle of brown buildings that stretches nearly the entire length of “downtown” Wolcott. The structures, connected by a series of enclosed breezeways, have the cobbled-together look that comes from many years’ worth of additions. Around their upper story runs a thick blue and green band — a festive bow tying all that brown together. Along the length of the band one word appears again and again, hand painted in that same brown: Buck’s.

Buck’s, of course, means Buck’s Furniture, as any northern Vermonter worth his spit knows. But what most Vermonters don’t know is how Buck’s came to engulf Wolcott, population 1700. How did this tiny town on the banks of the Lamoille River become home to Vermont’s largest furniture store?

It all began in 1957, when Floyd Buck, now 84, happened on a country store for sale. Buck had been working as a truck driver, delivering soda all over the state, but was looking for a change. The house where he’d lived with his wife, Ruth, had recently burned to the ground, and the couple needed a home. The owners of the country store offered to provide financing for the property, and Buck was sold.

What happened next is a story of American boot strapping and ingenuity. Buck continued to run the store as a grocery, but increased its offerings. Soon he was selling everything imaginable — bathtubs, antiques, hardware, fishing supplies, Christmas trees, appliances.

Buck’s capitalism was old school. He’d buy and sell, dicker, trade or barter for all kinds of items. “The art of the deal was an instinct for him,” says Sandy Howard, Buck’s daughter and current co-owner of the store.

One day a furniture salesman brought Buck enough pieces to outfit a 9-by-12-foot room, just to see if he could sell them. He did. By the late 1960s, the groceries had disappeared from the store, and Buck’s Fine Furniture was born (the Bucks later dropped the “fine”).

Buck was an ambitious fellow, and that little country store off the beaten path wasn’t going to hold all he had in mind. Despite his gift for merchandising and cramming large amounts of furniture into a small space, Buck’s enterprise needed to grow.

Twelve expansions later, the store now boasts 40,000 square feet of retail space and 12,000 square feet of storage. The vast indoor acreage is heated only on the weekends, when the bulk of Buck’s business happens. That business has swallowed up a parsonage, as well as the Buck family’s own home. Howard’s old bedroom is now full of mattresses, bed frames and nightstands for sale.

But any business owner knows you can’t grow if you don’t have customers. The Buck’s folks have always understood that, because of their rural location, they have to give people a reason to come. To lure customers from afar, they provide ferry passes and gas cards.

They also host insane sales, such as the Buck’s Dumb Daughter event years ago, so named because the store had to liquidate merchandise after Howard, 56, made a purchasing error. The sale’s name touched a nerve with some, but Howard says it was all in good fun.

The most recent sale celebrated the business’ 54th birthday by offering 54 percent off all furniture for 12 hours. For that event, Buck’s staff of 12 dressed in ’50s attire, served root beer floats, and bopped to tunes by Buddy Holly and the Everly Brothers while hawking the latest in power recliners.

Walking through Buck’s is an exercise in disorientation. The selection is dizzying: “There is no other place you can go and sit on 100 sofas,” Howard declares. Each of the dozens of showrooms is chock-a-block with every imaginable home good, from entertainment centers to Donald Trump’s brand of Serta mattresses. In the Trump Home showroom, semi-menacing advertisements featuring the Donald’s smarmy mug and teetering comb-over beckon customers to buy his decadent, gold-trimmed mattresses.

Buck’s selection is more for the “beer and bologna” set, Howard says. You won’t find any Barcelona chairs or Noguchi tables cluttering the store’s cavernous showrooms. The furniture here is meant to service people of any budget. That business model has served Buck’s well over the years.

One of the more remarkable things about the store is that the showrooms are full of knickknacks and gewgaws the family has collected over the years. Howard explains that, while her parents were always antique buffs, they began collecting in earnest when her mother fell ill with colon cancer.

Ruth Buck wanted to collect beer steins, and her husband thought it would be fun to do something similar. So he chose beer trays, which cover wall on wall of Buck’s today. There are hundreds of trays representing every imaginable brand of beer — XXXX from Australia, Oettinger from Germany, Iron City from Pittsburgh. Howard has lost count of how many her father amassed, but she thinks it’s enough for a world record.

Buck’s family treasure trove makes sense, given that the business is all about family. There is always a Buck on site — four work there in all — and Howard hopes there always will be. She intends to keep the business going as long as she lives.

“My goal is to never retire,” Howard says earnestly. “I wouldn’t mind working until I’m 102.”