WTF: What's Up With the Metal-Wrapped Tree? 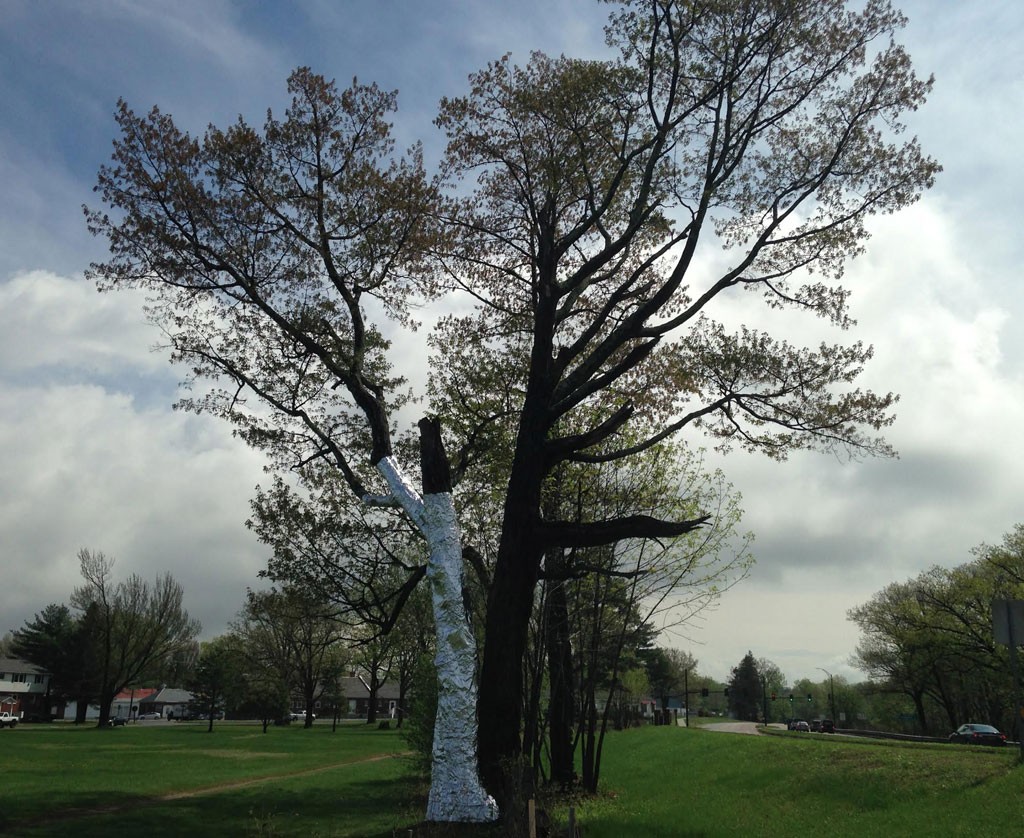 Vermonters have a special place in their hearts for trees. We tap them, hug them, build wheelchair-accessible houses in their canopies and periodically dance naked around them by the light of the full moon. So when a Vermonter notices something awry with a tree — as one reader recently did during his commute through Colchester on Route 15 — Seven Days is happy to investigate.

Robert Dillenbeck wrote to ask us about a large tree at Fort Ethan Allen that's partially wrapped in reflective metal. What's the deal?

We brainstormed a few less-than-scientific theories in the office. Could the tree's metal coat be a solar-powered squirrel repellent or a dollar-store treatment for keeping invasive emerald ash borers at bay? Ultimately, the answer proved to be less high tech.

Initial inquiries among area arboreal authorities — including the Vermont Agency of Transportation, the Colchester Public Works Department and the University of Vermont Extension — didn't turn up much.

We asked AOT district manager Dick Hosking if the silver girdle was some new feature of the state's tree maintenance program. He pointed out that the agency doesn't routinely do much with trees on state right-of-ways, unless one needs to be pruned or removed entirely.

"I saw someone wrapping it recently and didn't think much about it," Hosking said. He did remember seeing an art project in the vicinity last year that included objects hung from tree branches, so he assumed this was just the latest installation. "I guess the aluminum foil is supposed to bring it back to life," he said.

Indeed, the poor state of the tree's health is key to the meaning of the "installation." The tree in question stands just inside the fence of the Ethan Allen parade grounds, directly opposite Officers' Row. The decades-old maple, which measures at least eight feet in circumference at its base, is wrapped in heavy metallic foil running 20 to 30 feet up the trunk.

Clipped to a wire fence nearby is a plastic Ziploc bag containing a printed note, which provides the following explanation: 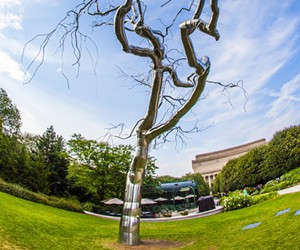 The maple is scheduled to be cut down. This wrap is an attempt for one last shining moment of life that has given us oxygen, refuge (for all including elves), beauty and food for birds and bugs. It is also homage to the Roxy Paine "Graft," a stainless-steel tree in the sculpture garden of the National Gallery of Art.

The unsigned note closes with the promise, "Final touches to be done."

"Graft" — for those who haven't visited the 6.1-acre park on the National Mall in Washington, D.C. — is a 45-by-45-foot artificial tree created by American sculptor Roxy Paine. Completed in 2009, Paine's "Dendroid," as the Brooklyn, N.Y., artist calls it, is composed of more than 8,000 components and weighs about 16,000 pounds. Paine has produced some 16 other Dendroids, each unique and crafted for its specific locale. They appear in such places as the roof of New York's Metropolitan Museum of Art, Seattle's Olympic Sculpture Park and outside the Modern Art Museum in Fort Worth, Texas.

Chuck Vile, tree warden and forester for the town of Essex, confirmed that the maple clad in silver (though not necessarily a silver maple) has been designated for removal because it's considered a "high-risk tree in a recreation area." Vile said the tree's deteriorating state could cause it to blow down in a windstorm, landing on a vehicle passing on Route 15 or hitting someone on the parade ground.

Ally Vile, director of the Essex Parks and Recreation Department, confirmed that the Dendroid doppelgänger was the handiwork of one of the residents of a nearby apartment complex. Each year, she said, the resident calls with ideas for "art in the parks."

"Her idea this time was that the sunlight would hit the foil and be beautiful in the park. So she wanted to wrap the tree with foil," Ally Vile explained. "She loves to incorporate art wherever she can."

The artist in question asked not to be identified and declined Seven Days' request for an interview. The parks and rec director said the artist always double-checks with the town before installing her artwork.

Ally Vile noted that the town won't fell the terminal tree until next winter, primarily to avoid parking heavy trucks on the lawn during the growing season. So art lovers, squirrels, elves and other treefolk have another couple of seasons to enjoy the maple's stately boughs.

Incidentally, Ally Vile clarified that she's not related to the town forester, though they share a last name.

"I happen to have a son named Charlie, so it's kind of funny," she said, adding without a trace of irony, "But I don't know if we're related. We haven't checked our family trees."

The original print version of this article was headlined "What's Up With the Metal-Wrapped Tree at Fort Ethan Allen?"