WTF: What's Up With That 'UFO' Painting in the Statehouse? | WTF | Seven Days | Vermont's Independent Voice

WTF: What's Up With That 'UFO' Painting in the Statehouse? 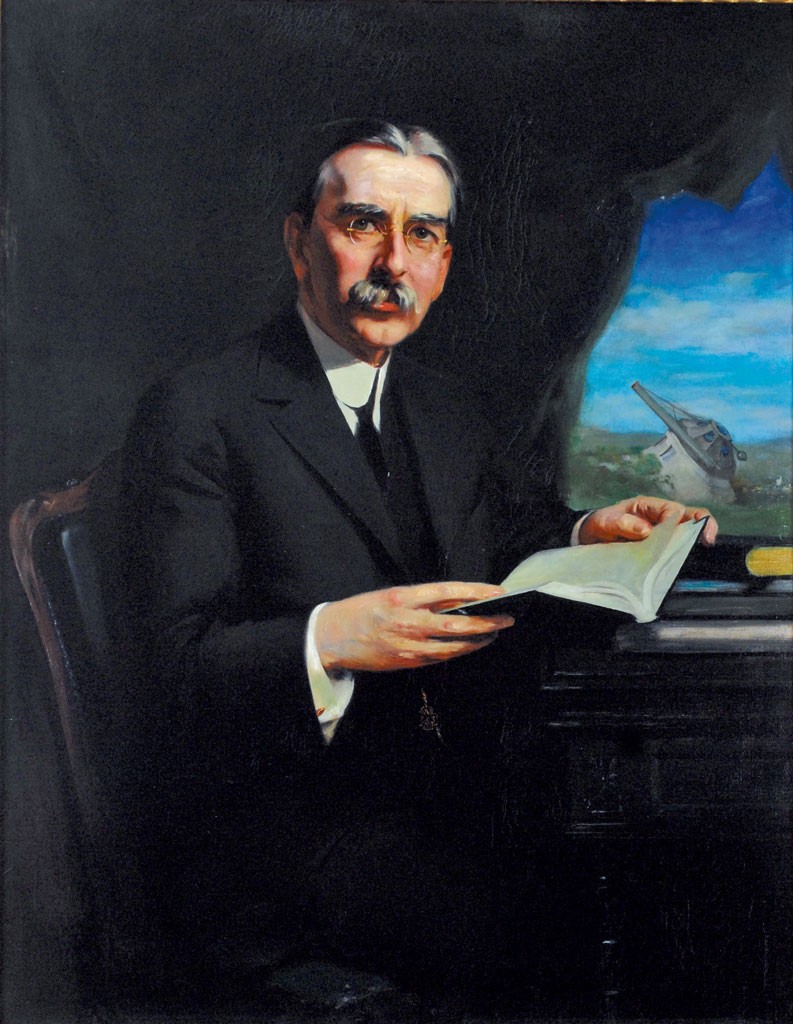 The Vermont Statehouse is filled with portraits of its 80 pre-Shumlin governors, along with other paintings and sculptures. But one that hangs in Room 11 — a caucus room off the Hall of Inscriptions on the first floor — has evoked a "What the..." response from many a viewer. Though it's neither a prominent painting nor one of a historically prominent governor, the image of James Hartness features a, well, thing in the background that some have suggested is a UFO.

"That's one of many guesses people have made," acknowledged David Schutz with a chuckle. The state curator, impeccably bow-tied and suited as always, met this reporter at the Statehouse to examine the painting by Olindo Ricci — actually a copy of a painting by renowned portrait artist August Benziger (1867-1955). "Allegedly someone in the [Hartness] family owns the original," Schutz said.

In the painting, the mustachioed Hartness sits with a book, a dark wall and curtain behind him. And that "thing" visible through a window? It's actually a telescope.

No Vermonters alive today are likely to recall Hartness' single term as governor, from 1921 to 1923. But plenty of historians and astronomers can tell you that he was a highly successful inventor and entrepreneur who was integral to the once-thriving machine-tool industry in Springfield, Vt. Circa 1920, Hartness designed something called a flat-turret lathe that, according to biographical notes about him at hartnesshouse.com, is "one of the most important machine tools ever made." It apparently was particularly useful in the burgeoning manufacture of automobiles.

That was but one of his inventions and innovations, which included international standards for the measurement and sizing of screw threads. The Hartness Screw-Thread Comparator was a lucrative invention for the Jones and Lamson Machine Company, which Hartness joined as superintendent in 1889. He was a mentor to other inventors in his employ, some of whom went on to found their own companies and contribute to the manufacturing prowess of the Springfield area. The town was so critical that it was reportedly seventh on Hitler's list of American cities to bomb during World War II. Luckily, that didn't happen; Springfield is instead on the National Register of Historic Places.

More fun facts: Hartness was an early adopter of aviation who took his first flight, in a hydrogen-filled airship, in 1913. Yep, the contraption created by Herr von Zeppelin. Hartness wisely went on to a Wright Flyer, got his pilot's license and headed the Aero Club of Vermont. He donated land for what would become the state's first airfield, in Springfield, which is why it is now called the Hartness State Airport. In 1927, after his transatlantic flight, Charles Lindbergh landed the Spirit of St. Louis there and hung out with Hartness at his home.

More germane to our painting, Hartness was also an amateur astronomer who had a telescope installed in his home and invented improvements to the device. His patent on one of those led to further commissions in the industry. Hartness encouraged J&L inventor and former arctic explorer Russell Porter to form the Springfield Telescope Makers club. To this day, that club continues to meet in Springfield for an amateur telescope-makers' convention called Stellafane. (The club and annual event are comprehensively documented at stellafane.org.)

The Hartness family mansion is now the Hartness House Inn, a 40-room B&B. It is likely the only one that can boast an observatory and astronomy museum. Says the inn's website: "More unusual is the secret tunnel system built by Hartness to access the observatory, museum and his secret workshop."

Guided tours are available by appointment, but if you can't get to Hartness House any time soon, the step-by-step description on the website is plenty evocative. It includes lines such as "The tunnel appears to be closing in but it is only a feeling. The cobwebs are getting thicker, as is the air"; and "Following an unfortunate accident, the door on the right has been permanently closed to the public." Once you manage to make it to the observatory, though, that telescope looks pretty cool.

Porter invented the turret telescope and made one for Hartness. Its innovation is a refracting lens that allows observers to skywatch from the comfort of a warm room, useful during Vermont winters. In her 2010 article about the Stellafane convention, Seven Days publisher and coeditor Paula Routly wrote that the telescope "looks like a whacked-out sugar shack on the lawn of the inn." She described the astronomy museum as "devoted to Porter"; it contains some of his earlier telescopes and even his arctic drawings.

As for James Hartness, being Vermont's 58th governor looks in retrospect like a footnote to his exciting and accomplished life. But for a guy who took to the skies — and looked to the stars — he had a pragmatic approach on the ground. During his gubernatorial campaign, Hartness urged Vermonters to stay in state rather than leaving to find employment. (Sound familiar?) He promised to improve transportation and grow manufacturing to supplement the state's agrarian economy. He won the election by a wide margin.

Today, in the Statehouse, Hartness' legacy is an image that invites speculation about extraterrestrials.

"What's great about this portrait is that it tells a story," said Schutz. "I'm always impressed with the number of people who find me to ask what the hell is in that painting."