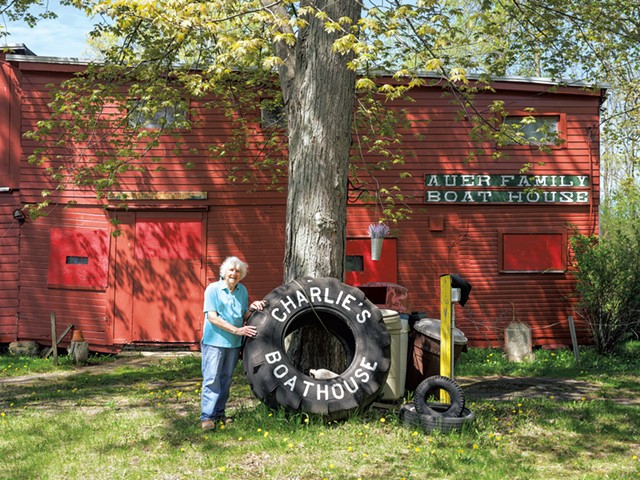 Charlie's Boathouse sits on a grassy, quiet piece of land that's just off the northernmost end of the Burlington bike path. It has a clear view of the Adirondack Mountains across Lake Champlain, and, on a warm May day, the snowy ski trails on Whiteface Mountain were still visible. But at the boathouse, dandelions were in bloom, the grass was lush and the sound of the waves hitting driftwood piled along the shore was peaceful.

Visiting the place feels like stepping into nostalgia. It has a throwback vibe that's palpable in the wooden signs nailed to trees announcing "Parking $5" and "Launching Boat $3." It's not hard to imagine kids running around barefoot, Nutty Buddy ice cream cones melting down sticky arms, a pile of wet life jackets on the grass and people drinking beer on a porch swing.

But the boathouse has been quiet since its namesake, Charlie Auer, died in February of 2021. The once-bustling summer landmark didn't open last summer. As walkers, cyclists and boaters return to the bike path and lake, many have wondered whether Charlie's Boathouse will return this year — or ever.

"Will the family reopen it this summer, or will they be selling it?" asked one Seven Days reader. "I hope you'll consider looking into this beloved spot."

To find out, Seven Days contacted Christine Auer Hebert, Charlie's 95-year-old sister, who still goes to the boathouse most days. She and Auer ran the seasonal business together for decades after they and two other siblings inherited the property; it was known as the Auer Family Boathouse before they took over in the early 1990s.

"The lawyer told [my mother], 'If one of you dies, you go right to the lawyer, even before you go to the undertaker, and you put the children's names on the boathouse,'" Hebert recalled.

After Hebert's father died, she said, her mother did just that. As the only siblings still in Vermont, Hebert said she and Auer figured that if their mom did the books, Auer did the boats, and Hebert kept the boathouse stocked and running, they could keep it going.

And so they did, selling sundries, snacks and bait and renting out boats, for decades. Even during the pandemic summer of 2020, the two siblings kept the place afloat.

Hebert said she and Auer were able to make the business work for so many years by carefully scheduling summer vacation weeks off from their full-time jobs and with help from friends and family members. Now, she said, her children and their cousins don't have the ability to take weeks off during the summer to run a whole other business.

And as far as the original siblings are concerned, Hebert said, "I'm the last one."

Last summer, Hebert said, she was happy to let passersby and regulars use the space as a park. Currently, the familiar lawn gliders are dismantled, and there are stacks of tires and sticks scattered about the property. But there's a little red bench to take in the view and plenty of grass to lounge in.

"I'm not going to open this summer because I enjoyed it so much as a park last year," Hebert said.

She said she was surprised last year to find that even though she didn't charge anyone to use the property, folks left money tucked under the door or even brought it to her house in appreciation. Some of those donations were sizable.

In addition to the donations, Hebert said she was delighted to find that visitors were careful to pick up after themselves. On occasion, she added, people head down to the boathouse just to pick up trash and tidy the sticks and other debris that wash up on shore. She'll continue like this, she said, until she can't.

Hebert acknowledged that in the last year or so, someone offered to purchase the property from her, but not at an amount that would work for her family. The boathouse lot isn't on the market, but she's not opposed to selling it, she said.

"If I sell, it's got to be divided between the 10 grandchildren. That's where the money is," she continued. "I'm not going to let it go for nothing. We worked too hard, too long."

The boathouse shaped Hebert's whole life. She and her husband, Ken, who is also 95, have been married for 73 years and together for 81. They met when they were 14 and he worked for her parents, cutting trees and opening the boathouse in the summer. "He helped my dad and my mom because he wanted to see the blonde," she said. "I was the blonde."

The community support is heartwarming, Hebert said: "I can't tell you how much this pleased us." She said her father, Charlie Sr., established from the early days that running the boathouse wasn't about the money; it was about being there. A colorful hand-painted sign hung above the doorway that read, "There is no place like this place anywhere near this place so this must be the place!"