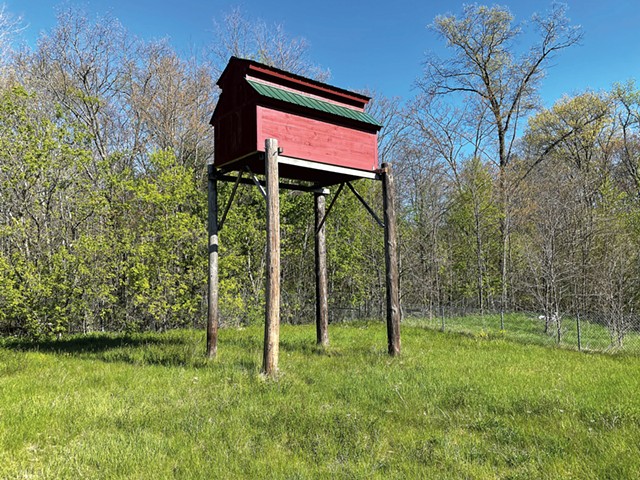 A Seven Days reader recently asked about what she called the "mini-barn-on-stilts structure" that's adjacent to the Vermont Public Radio studios at Fort Ethan Allen in Colchester. Located behind a chain-link fence and alongside a pond and some woods, the structure resembles a red monitor barn with a green metallic roof. It sits atop four telephone poles but has no doors, windows or holes on its sides — at least, none that is visible from nearby Troy Avenue.

Speculations about the mysterious cordoned-off sky barn are understandable, given its surroundings. Located near the fence line of the Vermont National Guard's Camp Johnson, the structure is also close to a Vermont State Police training facility and fleet lot; the latter contains police cruisers, hazmat rigs and a mobile crime scene command post. Signs nearby reading "All activities monitored by video camera" only add to the intrigue.

Is it a sniper tower? An environmental sensor for detecting chemical, biological and radioactive weapons? A prototype of a dairy-themed All Terrain Armored Transport à la Star Wars?

Alas, it's nothing quite that cinematic. According to the Vermont Fish & Wildlife Department, the mini barn on stilts is a bat condominium, or oversize bat house. It was designed and built by Milton bat enthusiasts Joe Gardner and Barry Genzlinger, the latter of whom is a licensed bat rehabilitator and cofounder of the Vermont Bat Center. On July 28, 2017, Vermont Fish & Wildlife staff and Green Mountain Power line crews used a crane to hoist and mount the bat house 16 feet in the air.

The structure is 12 feet long by six feet wide by eight feet tall but contains no floor, only rafters designed to accommodate roosting bats. Vermont Fish & Wildlife reports that it's the largest bat house in the state, capable of housing hundreds, if not thousands, of little brown bats. (Gardner built a similar one that's erected at Kingsland Bay State Park in Ferrisburgh.) But despite its roomy accommodations and presumably insect-rich feeding environment beside the pond, the bat condo has yet to attract any full-time residents. Why?

The likeliest explanation is that Vermont has far fewer bats today than a decade ago. The culprit: white-nose syndrome, a deadly fungus that infects hibernating bats and makes them behave erratically, such as fly during daylight hours, which exhausts their fat reserves crucial to surviving the winter. 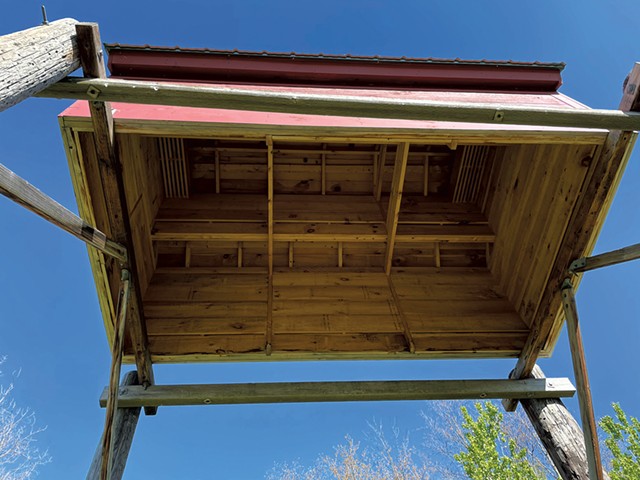 First identified in caves near Albany, N.Y., in 2007, white-nose syndrome has spread across North America, killing millions of bats. The disease first appeared in Vermont in the winter of 2008-09, according to Alyssa Bennett, small mammals biologist with Vermont Fish & Wildlife. Since then, the fungal infection has decimated Vermont's population of little brown bats, reducing their numbers by 90 percent.

White-nose syndrome infects some of Vermont's eight other bat species, including tricolored bats and northern long-eared bats. But the bat condo was built specifically for little browns, which the state added to its endangered list in 2011. According to Bennett, "It appears the disease is here to stay."

Researchers are exploring various treatment options, including ultraviolet lights to kill the fungus, and naturally occurring bacteria or other fungi that might outcompete it. Thus far, a white-nose silver bullet remains elusive.

Has Vermont's loss of bats caused an uptick in insects, especially the stinging varieties that are vectors for human and livestock diseases?

"You would think that a 90 percent change in the bat population would be noticeable and measurable," Bennett said. "But so far, I have not been able to tease that answer out from anyone who is an expert in the insect world."

In addition to consuming mosquitoes and other insects that bug farmers and backyard barbecue enthusiasts, bats help humans in another valuable way: They're harbingers of new invasive species. Researchers can analyze the DNA found in bat guano to determine what the bats are eating, revealing new insect species long before they're caught in human traps.

Though the prospects for Vermont's bats seem bleak, Bennett said there's still cause for optimism. As she explained, the 10 percent of little brown bats that have survived thus far may have natural immunities that they will pass on to their offspring. In addition, they may be genetically predisposed to different roosting behaviors that protect them from infection. Whatever the explanation, she said, there appears to be "something special" about the bats that aren't dying, and her long-term hope is that the species will eventually recover.

In the meantime, bat experts ask that the public never kill bats stuck in homes, garages or other structures. Bats don't attack humans, pets or livestock, so people needn't freak out or swat them with tennis rackets.

It's unknown whether bats will take up residence in the Colchester bat condo; none was observed when volunteers last surveyed it in 2019. But Bennett pointed out that several years can elapse before bats occupy a new roost — often only after they've been evicted from their previous one.

And, unlike humans, bats haven't enjoyed an eviction moratorium during their pandemic. So whenever a dead tree is cut down or an old barn collapses, its former bat occupants will need new housing, and the mini barn on stilts might just do the trick.

The original print version of this article was headlined "What's the Miniature Barn on Stiltsat Fort Ethan Allen?"