WTF: What's the History Behind the Log Cabin Motel in Stockbridge? 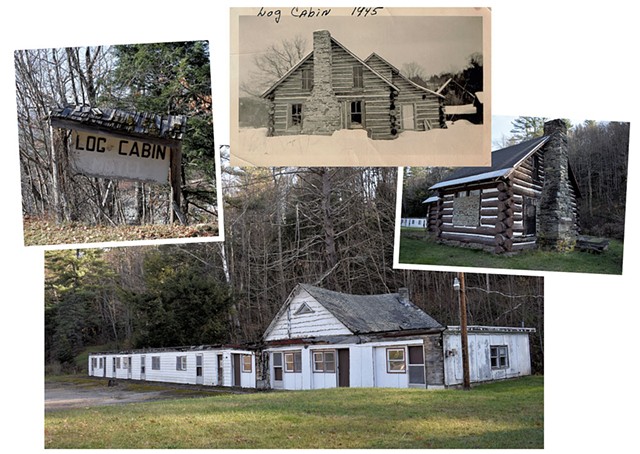 For more than 30 years, James "Buzz" Surwilo of Montpelier has driven past the Log Cabin Motel, on Route 107 in Stockbridge. The abandoned lodgings sit across the highway from the White River, in the sparsely populated town on the eastern slopes of the Green Mountains. Based on its location, Surwilo assumed that the motel once catered to hunters, fishermen and other "outdoorsy types."

"At some point, maybe 20 years ago, it closed," he wrote, in an email. "The motel and cute adjacent log cabin ... [have] been falling into disrepair and [are] now pretty sorrowful looking. What happened, and why did someone just walk away from a business ... and let it become dilapidated to the point of no return?"

Initially, there wasn't much to go on. Scores of old structures — run-down barns, abandoned strip malls, defunct general stores — dot Vermont's landscape, and many are collapsing after years of neglect.

The Log Cabin Motel seemed to fall in that category. The one-story, eight-room motel is nondescript, with flaking white paint and a roof as rippled as wet cardboard. The one notable feature on the property is the separate log cabin: a sturdy-looking house, presumably built in an earlier era, with chunky, Lincoln Log beams and two stone chimneys.

The past president of the Stockbridge-Gaysville Historical Society, Mette Rea, had little to offer about the cabin except that her group has never researched it. As for the adjacent motel, she called it "an eyesore." Similarly, the Stockbridge town clerk's office had few records on the commercially zoned property except for the name of an absentee owner in East Longmeadow, Mass.

But Surwilo's query was fortuitously timed. Several weeks after he wrote it, Kirk White, a 58-year-old acupuncturist — and the newly elected Vermont House rep from Bethel — posted, on the Stockbridge Connections Facebook page, three black-and-white photos of his family members building the log cabin.

As White explained in a phone interview, his father's family had lived in a nearby inn in Stockbridge. In 1944, after the inn burned down, White's relatives — his then-16-year-old father, Ronald; uncle Ray; and grandfather Leo — built the cabin together as their new house.

Ronald White went into the military in 1950. While he was away, his father died, the log cabin was sold, and the family moved to a 55-acre farm in Bethel, where Kirk White now lives with his wife.

Evidently, the adjacent motel was built years later, possibly by Bob and Shirley Emmons. According to one commenter on White's Facebook post, Bob Emmons sold electronics and was known locally as the "TV Man." But efforts to reach this Facebook commenter and others, who seemed familiar with the old motel, were unsuccessful.

"When I was a kid in the '70s, the motel was still running, although even then it was somewhat sketchy," White said. By that time, the log cabin had been converted into a tavern, which White visited just once.

Steve Penniman, current owner of the Log Cabin Motel, remembers going there. The 67-year-old electrician grew up in western Massachusetts, but his grandparents owned property in Stockbridge. Once a year, Penniman's father would take him hunting in Vermont, and they'd stay at the motel. In later years, Penniman said, he rented rooms there during his own hunting trips.

"It was $13 a night, which I thought was an outrageous deal," he recalled. "The place was always packed." Penniman remembers deer hunters hanging their quarry from an old maple tree out front, which has since been cut down.

About a decade ago — he can't remember exactly when — Penniman and a business partner purchased the 2.5-acre property from out-of-state investors, who had themselves bought the closed business at auction. Initially, Penniman intended to develop it, but that was put on hold when his partner pulled out. He floated the idea of building storage units on the land but said he has no immediate plans for the property, other than to keep the lawn mowed and the trash picked up.

"There's been talk of rebuilding the log cabin, because there's nothing salvageable in there," he added. "If we rebuilt it, it would be in the same style. My kids are always bugging me to do something with it."

But Penniman's connection to Stockbridge is fraught with powerful emotions. On November 20, 1978, while hunting there during Thanksgiving week, the then-25-year-old walked into the woods one morning to cut down a tree. When it fell, it pinned him to the ground.

Penniman lay trapped for five hours in 20-degree weather with an open leg fracture, three-quarters of a mile from the nearest road. It was only after a group of hunters heard his cries for help that a search party was summoned. Penniman was finally rescued by a state trooper and a game warden, and then spent the next two months recovering in Mary Hitchcock Memorial Hospital in New Hampshire.

What were those five hours like, with his leg crushed under a downed tree and facing the prospect of bleeding to death or dying of hypothermia? As the hours ticked by, did he contemplate his one gruesome means of escape involving the chain saw?

"I can't tell you the whole story," Penniman said. "I have PTSD from it, and I can never get through the end of it without breaking up."

To be clear, Penniman never suggested that his traumatic experience in the woods explains why the Log Cabin Motel still sits vacant. After all, nearby Killington Ski Resort has expanded its accommodations on the mountain in recent years, forcing many small, mom-and-pop motels in the area out of business.

Still, it seems apropos that Penniman continues to cling to a business, albeit a dead one, with "log" in its name.