WTF: What’s Happening With the Granite City Grocery in Barre? 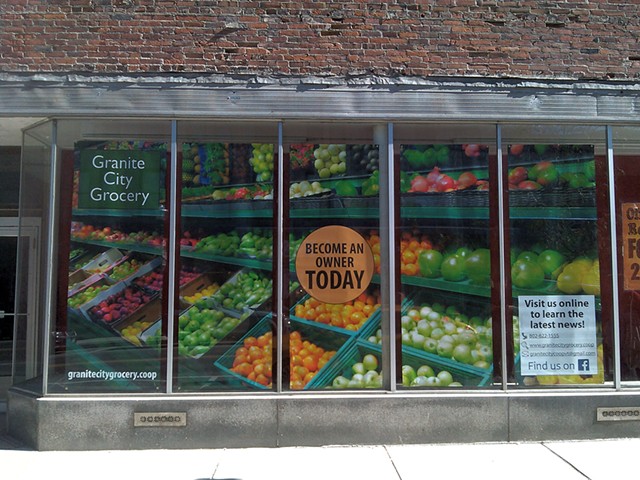 In February, a Seven Days reader asked us about yard signs that had popped up on lawns throughout Barre that read, "We own it!" The reader was aware that the signs were posted by members of the Granite City Grocery, a proposed food cooperative that's been in the works for years. But her questions were, "What do they own?" and "What happened to the money that people invested in it?"

Both are legitimate questions. Seven Days first reported on the plans to found a member-owned grocery store back in August 2012. Since the old Grand Union pulled up stakes three decades ago, Barre's downtown hasn't had a full-fledged supermarket. As Barre resident Emily Kaminsky told reporter Kathryn Flagg in 2012, "We're tired of waiting for someone to come along and meet our needs."

That wait has continued, though not for lack of interest or effort. In 2013, more than 100 Barre residents attended a community meeting to talk about the dearth of downtown food shopping options and to discuss opening a brick-and-mortar food co-op, which would be owned and democratically governed by its members and employees.

Over the last eight years, Granite City Grocery, as the co-op was named, sold 723 memberships — each for a household of one to four people — at a onetime fee of $200. Since then, however, the co-op hasn't sold a single carrot, loaf of bread or gallon of milk.

There are several large, modern supermarkets in the Barre area, including a Hannaford, a Shaw's and a Price Chopper, all within a short drive from downtown. But many city residents don't own a vehicle. More than a quarter of Barre residents live below the poverty line, and affordable grocery options within walking distance of downtown are limited.

"There are still a significant number of people who [food] shop at Dollar General," said Nick Landry, president of the co-op's board of directors. "I know some people who go to Cumberland Farms to buy their groceries."

Landry is a Barre native who left for 10 years to serve in the U.S. Marine Corps before earning a business degree and moving back in 2013. A week after coming home, he enlisted in the effort to launch the food co-op and has been involved as a volunteer ever since. (Landry also works a full-time job as an IT specialist at Aldrich Public Library.)

Downtown Barre's status as a food desert hasn't changed much since then, although in 2019 Vermont Salumi, which produces and sells cured meats and sausages, opened AR Market, a high-end grocery store on Main Street.

But Landry noted that the business realities of the supermarket industry have shifted since 2013. Back then, the co-op planned that at least half its food items would be conventional and sold at lower-than-average price points; its higher-priced organic products would have offset them. But in the last eight years, wholesale prices for groceries have gone up much faster than inflation, Landry explained, "which changes the co-op's entire financial picture."

Then there's the human factor of keeping people active and engaged in the cooperative effort. Because Granite City Grocery has yet to come to fruition, new memberships have flagged, falling shy of the 1,500 goal.

The co-op has also struggled to recruit new board members. The original board of 13 has dwindled to four, and two of the four — Landry and his partner, Heather Runk — plan to step down in June after having served for several years. The remaining two board members agreed to stay on for one more year to train new members, provided that at least five people step up to serve. (A board of at least five is required by state law.)

At Granite City Grocery's next annual meeting on June 10, co-op members will be asked to vote on new board members. They will also be asked a more fundamental question: Should Granite City Grocery dissolve entirely? If members vote to do so, the funds remaining in the co-op's bank account, which amount to less than $7 per member, would be donated to the Vermont Foodbank rather than returned to members.

So what happened to all the money that members invested?

The Granite City Grocery has maintained a website and member database, Landry explained, both of which cost money. It also paid for market studies over the years, which cost about $10,000 apiece. Though most of those studies were funded by state and federal grants, he said, the most recent one was underwritten with membership equity. In addition, the co-op must maintain a state-mandated indemnity insurance plan for its board's officers. "That was the biggest chunk, paying the insurance bill every year," Landry added.

Have co-op members been understanding about this existential crisis or frustrated by it?

In the end, Granite City Grocery's members may only own the dream of a supermarket in downtown Barre. But according to some, including Landry, there's still a chance the dream could become a reality.

The original print version of this article was headlined "What's Happening With the Granite City Grocery in Barre?"