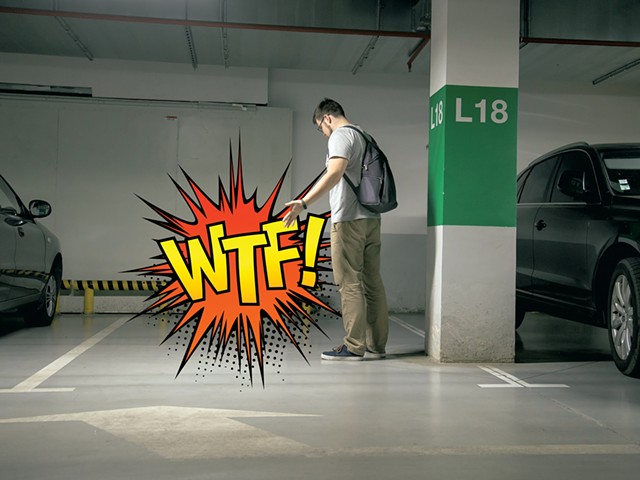 When Janet read on Facebook in December that thieves were rifling through cars in Burlington's Old North End looking for items to steal, she followed the advice of a neighbor: Keep car doors unlocked so thieves won't smash the windows.

The day after Christmas, Janet (who declined to give her last name) came outside to find that someone had stolen her 2014 black Mazda3 right out of her Spring Street driveway.

Such incidents have become increasingly common in the Queen City, where vehicle thefts have spiked in the last year. Between January 1, 2021, and January 15, 2022, the Burlington Police Department received 168 reports of stolen vehicles. During the same period a year earlier, 77 vehicles went missing; in 2019, just 55.

According to Burlington's acting police chief, Jon Murad, a small percentage of the vehicles reported stolen were actually towed or parked elsewhere. Nevertheless, Murad called the recent uptick in automobile larcenies "significant." Whether those crimes were the product of pandemic-bored teens, people in financial straits or a Gone in 60 Seconds-like crime ring, he couldn't say.

"What's driving it? I don't know for sure," Murad said.

Back when the Sears Lane homeless encampment was still occupied, he noted, it was "a go-to place" for local law enforcement tracking down stolen vehicles. Though the encampment, which the city closed in December, didn't operate as a "chop shop" like those found in bigger cities, he added, "There was definitely some vehicle disassembly going on there."

One likely motivator, he suggested, is substance abuse, a conclusion with which Chittenden County State's Attorney Sarah George concurred.

"The [vehicle thefts] that I have personally prosecuted were substance-use fueled," George wrote in an email. "Folks [are] looking for easy property to sell for drugs."

And as drug use in Burlington spiked in 2021, so did property crimes of all kinds, including burglaries, Murad said.

"What we're seeing from 2020 to 2021 is a uniform increase (in property crimes) across the city, at the very time when we do not have the police resources to patrol," Murad added. Currently, BPD has 65 officers on its rolls, compared to 96 a year ago. (In June 2020, Progressive city councilors pushed to reduce BPD's ranks through attrition; numerous officers have switched departments or resigned sooner than expected.)

The uptick has been even worse in Rutland. According to Nathan Thibodeau, a crime analyst with the Rutland City Police Department, between 2016 and 2020, the city averaged 15 reported stolen vehicles a year. In 2021, there were 42. Since January alone, Rutland police have received at least eight reports of missing vehicles.

Thibodeau suggested that most are "cash-ready crimes," akin to the city's recent rash of catalytic converter thefts. The antipollution devices are often stolen from vehicles and pawned for their precious metals.

Such increases indicate a marked reversal in crime trends from the last 25 years, when vehicle thefts, both in Vermont and nationwide, had been falling steadily. According to the Federal Bureau of Investigation's Uniform Crime Reporting Program, larcenies of all motorized vehicles in Vermont — including trucks, buses, motorcycles, scooters, snowmobiles and ATVs — declined from 585 in 2008 to 264 in 2020. In each of those years, Vermont had the lowest number of vehicle thefts of any state.

In addition to substance-abuse-related motivations, why are they revving up again?

Tully Lehman, senior public affairs manager at the National Insurance Crime Bureau, explained that several factors are at work. Since the start of the pandemic, more vehicles have been left parked for extended periods, making them easy targets for thieves.

Another explanation, ironically, is the increased number of new vehicles equipped with keyless ignitions and smart keys. Though manufacturers adopted these innovations, in part, to foil thieves' ability to hot-wire cars, the technology is effective only if drivers take their key fobs with them when they park. Nationally, one in 10 stolen vehicles was ripped off because owners left their keys or fobs inside. In Rutland, Thibodeau found that 19 percent of the vehicles reported stolen in 2021 were left unlocked with the keys inside.

Especially common in winter is theft of unattended vehicles left running to warm up. In fact, the day this reporter interviewed Murad, Burlington police had just apprehended two runaway juveniles from Rutland who'd made off with a vehicle whose owner left it running. One of the teens had used the vehicle to try to run over his ex-girlfriend in the Burlington area.

Generally, vehicle larcenies become a priority to police only when they pose a public safety threat, as with the runaway teens, or when they're used in the commission of a felony. The latter was the case in mid-January, when a thief stole a truck and rampaged through the Intervale Community Farm, destroying greenhouses and beehives. (As of press time, that case remained unsolved.)

After Janet learned that someone had allegedly spotted her car in Essex, she called the Burlington police, but they never followed up.

"The police have been of no help at all," she said.

Murad admitted that, given his department's diminished resources, most vehicle thefts are a low priority for investigation.

"Officers will take that report, but it's not going to be something they spend time on, to be frank," Murad said. "But when the driver of that stolen vehicle tries to run his ex-girlfriend over, we start looking for it."

The only possible good news is that Vermont has an 81 percent recovery rate for stolen vehicles, according to the National Insurance Crime Bureau. But as Lehman pointed out, just because a vehicle is "recovered" doesn't mean it's undamaged. Many get driven into rivers, burned or stripped for parts.

Janet, whose car was uninsured for theft, is taking a different approach to recover it.

"If anyone can help me find it, I'll take them out for dinner at Hen of the Wood," she said. "I really want my car back."