WTF: What Happened to the Planet Aid Boxes? 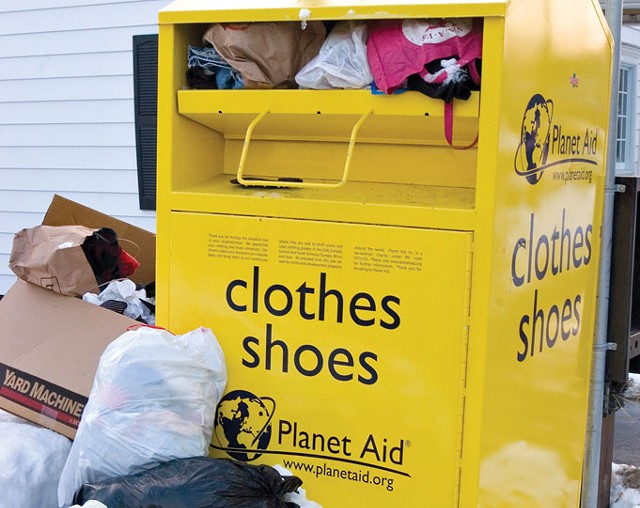 For years, Vermonters could empty their closets, drawers and basements of "gently used" clothes and shoes and donate them to Planet Aid, using any of the international charity's dozens of yellow drop boxes around the state. Recently, however, most of those collection bins, once ubiquitous at gas stations, convenience stores and recycling centers, have disappeared.

Did Planet Aid get muscled outta Dodge by the combined forces of Goodwill Industries International and the Salvation Army? Did Vermonters finally discover the virtues of donating to locally owned vintage stores? Or did the negative publicity that's dogged Planet Aid for years — regarding, among other things, its alleged ties to an international cult leader — finally catch up to the group? WTF?

Some background: Planet Aid was founded in 1997 in the Boston area with the mission of collecting and recycling used clothing and textiles to "protect the environment, reduce waste and increase the efficient use of vital resources." Proceeds from those collections, according to the group's website, fund sustainable development projects in Africa, Asia and Latin America.

When Planet Aid's collection bins first arrived in Vermont in early 2007, representatives of other local charities that collect used clothing, such as the Salvation Army, expressed concern. They cited the examples of New Hampshire and Maine, where other charities' donations had dried up after Planet Aid boxes appeared.

At the time, a Planet Aid spokesperson assuaged those concerns, telling Seven Days that the group collects many of its items at recycling centers and waste transfer stations, where they'd otherwise get landfilled.

So it's not competition that has caused so many of those collection bins to vanish from Vermont in recent months. According to a September 25, 2015, email sent to the Chittenden Solid Waste District by Patrick Holland, operations manager for Planet Aid Northern New England, the disappearance of Vermont's drop boxes had more to do with people not knowing or caring that the yellow bins aren't garbage Dumpsters.

"We are not completely abandoning Vermont. We are, however, pulling our boxes out of towns where we are collecting 20 percent or more of trash," Holland wrote. "Unfortunately, when towns charge their residents to dispose of household trash, mattresses and the like, we suffer because it ends up in front of our boxes." According to Holland, Planet Aid will continue to maintain some bins in the Burlington area, Montpelier, St. Johnsbury and select towns along the Interstate 89 corridor.

Andrew Rice, a Los Angeles-based spokesperson for Planet Aid, says his organization has a sophisticated system for analyzing the value of its more than 10,000 bins nationwide. That system tracks how long it takes each bin to fill up — one on the University of California, Los Angeles, campus, Rice notes, has to be emptied seven times a day. Planet Aid also tracks the unusable percentage of each box's contents and whether the proceeds justify its maintenance expense. If it costs $200 a week to keep a bin that only produces $100 a week, he says, "That math doesn't work."

Rice also notes that the wholesale price of recycled textiles has declined in recent years. In short, once-profitable bins in Vermont may not be profitable anymore.

Finally, Rice emphasizes that the recent disappearance of some Planet Aid bins has nothing to do with a radio program that aired in March on many public radio affiliates, including Vermont Public Radio.

"Reveal," a show produced by the Center for Investigative Reporting, spent a year investigating Planet Aid's operations in Africa. In its March 19 episode, titled "Alleged cult leader plays shell game with U.S. foreign aid," the show examined Planet Aid's connection to Mogens Amdi Petersen. For years, the enigmatic character from Denmark has been suspected of running an international cult and various money-laundering schemes.

The "Reveal" reporters focused on a Planet Aid-affiliated group called Tvind, aka the Teachers Group, which has received more than $130 million in grants from the U.S. government, ostensibly for aid programs in Malawi. However, the reporters found that many of those programs had little to show for the money spent and instead had allegedly swindled native Malawians out of their wages.

In a two-page response to the "Reveal" story, Planet Aid called those allegations categorically false and challenged the credibility of its sources.

"Planet Aid has a long and successful track record managing U.S. government projects in Africa," the letter reads. "Government agencies continue contracting with Planet Aid precisely because they have seen the positive results in the field, and they have conducted extensive financial reviews of these programs. Further, as with any other 501c(3) nonprofit, all of Planet Aid's financial statements are publicly available and are regularly reviewed by the IRS."

Planet Aid's track record is mixed, according to consumer groups that monitor charitable organizations. In January 2015, the Better Business Bureau's Wise Giving Alliance listed Planet Aid as an "accredited charity," meaning it met all 20 standards for accountability, including governance, finances, fundraising and proper measurement of effectiveness.

Still confused? CSWD's marketing and communications coordinator, Clare Innes, says that if Vermonters want to donate used clothing but are feeling blue about the yellow bin, "There are many alternatives." Those include 14 reuse shops and charities in Chittenden County alone, she says, as well as Salvation Army collection bins at all seven CSWD drop-off centers.