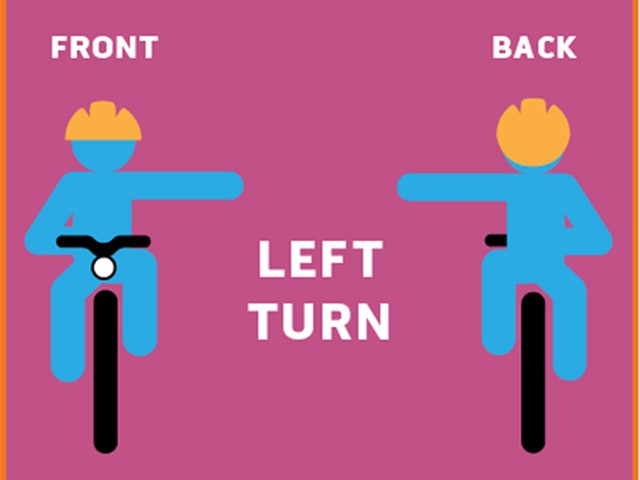 It can be hard for motorists and cyclists to share the road. And when someone commandeering a couple of tons of steel doesn't understand what a cyclist's gesture means, the results can be deadly. A reader wrote in to ask us: WTF are those hand signals, exactly? A rarefied form of sign language? Cryptic ways of flipping the bird? Laughable gang signs?

The truth is far simpler. Cyclists who use hand signals — and they are far from universal — are trying to communicate their intentions to others on the road. Lacking turn signals and brake lights on their two-wheelers, they're hoping to ensure their own safety.

Luckily, the three basic gestures are simple to use and comprehend.

Left arm extended straight out: "I will soon be turning left."

Left arm extended with a 90-degree bend, forearm pointing up: "I will soon be turning right."

Left arm extended with a 90-degree bend, forearm pointing down: "I will soon be stopping."

Yet Jason Van Driesche, deputy director of the Burlington walk-bike advocacy group Local Motion, says a movement is afoot to clarify those straightforward signals even more.

"Our inclination, and that of most organizations like ours across the country, has been to shift to 'Be as obvious as possible,'" he says. For instance, if you're on a bike and intend to turn left into a particular driveway, point directly at that driveway. "That's the bottom line: Be obvious," says Van Driesche. "Don't require any more brain power of your fellow users of the road than you absolutely have to."

Local Motion is committed to transportation alternatives, but its broader mission encompasses safety for everyone who uses local streets: motorists, cyclists and pedestrians. You, too, Segway riders!

Unfortunately, cyclists are at a disadvantage, says Van Driesche, because many motorists have a sense of entitlement — they believe the road belongs solely to them. Ensuring cyclists' safety must start with a cultural change, he says.

"We're now asking people to change their perspective on what roads are for," Van Driesche continues. "They are not solely for getting from Point A to Point B as quickly as possible in your private vehicle ... There are now many other demands on our roads, and it is entirely reasonable that our roads should serve those multiple purposes."

On this month's Town Meeting Day, a majority of Burlington voters sided with transportation safety advocates and shot down a measure that would have preserved a four-lane section of North Avenue exclusively for motor vehicles. That vote eliminated the last semi-official obstacle to Burlington's North Avenue Pilot Project, which aims to reconfigure the busy thoroughfare for the benefit of everyone on wheels or on foot. The full plan will be made public later this year.

Vermont's roads are less congested than those of most urban areas, but that doesn't mean cyclists are free from peril. In a 2014 incident that received national attention, cyclist Carl Etnier was harassed on a dark stretch of Route 2 in East Montpelier by motorists who yelled, among other epithets, "We should have killed you!" Just this month, a cyclist was hospitalized as a result of injuries he suffered in a collision with a motor vehicle on Burlington's Riverside Avenue. Last April, cyclist Richard Tom was killed on Route 116 in Hinesburg when a speeding motorist lost control of his vehicle.

Perhaps incidents like these inspired that same Seven Days reader to ask whether Vermont mandates a minimum distance between cars and bikes, or requires cyclists to use lights at night. Short answer: Vermont has no shortage of bike laws. Van Driesche and Local Motion education and volunteer manager Mary Catherine Graziano provided Seven Days with a handy-dandy chart that lists them all.

In every case, the goal is to maximize safety. So, yes, cyclists are required by state law to use a headlight and a taillight (or at least a rear reflector) at night. No state law spells out a minimum safe distance between cars and bikes, but Van Driesche says that three or four feet is a good rule of thumb.

Several of the laws use that fuzzy term of gray-area legalese, "reasonable." For instance, law states that cyclists may ride no more than two abreast, so long as they do not "impede the normal and reasonable movement of traffic." In Burlington, cyclists can ride on sidewalks so long as their speed is "reasonable for the existing conditions."

The wiggle room afforded by reasonableness is designed, in many cases, for cyclists' safety, says Van Driesche. If a cyclist needs to make a turn but is forced for some navigational reason to keep both hands on the handlebars, then it is perfectly legal for him or her not to use a hand signal.

"The bottom line is," says Van Driesche, "what's going to keep people from getting hurt and get everybody home safe?"

The issue of bike safety is of special interest to this reporter. I'm the guy you may have seen biking along Pine Street with the dorky orange panniers and even dorkier blue helmet. I'm an ardent user of hand signals, but I can't say the same for many other cyclists. Some of them exhibit reckless behavior that puts them in greater danger than does a passing motor vehicle.

In any complex and potentially hazardous situation — such as negotiating traffic — clear communication is critical. In an ideal world, motorists would observe and understand cyclists' hand signals, and cyclists would actually use them.

Vermont Walk/Bike Summit, Friday and Saturday, April 1 and 2, in Rutland. Details at walkbikesummitvt.com. To learn more about bike safety, see bicyclesafe.com or localmotion.org.