WTF: What Are Those Train Cars by the Moran Plant? | WTF | Seven Days | Vermont's Independent Voice

WTF: What Are Those Train Cars by the Moran Plant? 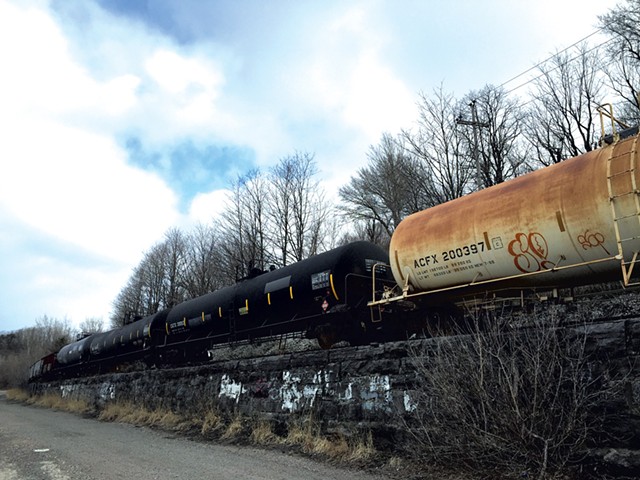 A glance at the lone railway line east of Burlington's Moran Plant can be deceiving. Unless you're close by, perhaps biking or jogging north on the city's rec path, you might imagine that the tracks just keep on going. And the line used to — all the way through the Champlain Islands and into New York State.

But today the rail spur, cut short by the Burlington Bike Path, serves as an overflow yard for the Vermont Rail System. Currently, the yard contains five tank cars and 18 ballast cars. ("Ballast" refers to rough-cut gravel used to stabilize railway ties.) The latter look a lot like coal cars, which is what inspired a curious Seven Days reader to wonder what coal cars were doing down at the waterfront. After all, the Moran Municipal Generation Station swapped coal for wood chips in the late 1970s; the 31-year-old power plant was decommissioned in 1986.

The current set of rail cars, many adorned with graffiti, has been in the yard "for a few months," said Vermont Railway assistant vice president Selden Houghton in a phone call. He noted that it's not uncommon to see train cars sit motionless for long periods; that's just how the business works. Ballast cars are used in railway repair, which can't happen until the ground is thoroughly thawed, so the cars will most likely hang out by the Moran for a while.

Houghton couldn't say exactly how long. "We put the cars there as needed and pull them off as needed," he said. "It's based on business needs or track maintenance."

The exec did allow that the cars will not stay put indefinitely: "Track work is done every year, so, yes, there is a good chance these cars will go to other locations during the course of the construction season."

Carting gravel is a mundane mission for a rail car. But if the current status of the cars on that small spur isn't particularly interesting, the history of the line is. The railway once stretched from upstate New York down to Bellows Falls. Chartered in 1843 as the Rutland & Burlington Railroad, by 1867 it had become simply the Rutland Railroad. After the early-20th-century addition of causeways and trestles through the Champlain Islands and across the lake, the railway connected Burlington to Rouses Point, N.Y., and to points west and north into Canada.

Over the decades, the rail business gradually declined. In 1950, the company reorganized and renamed itself Rutland Railway. But major strikes in 1953 and 1961 further crippled the line, which was discontinued in 1963. Much of the right-of-way was purchased by the State of Vermont, and the remaining tracks — including those in upstate New York — came under the jurisdiction of Vermont Railway, which began operating in January 1964. Its president, Jay Wulfson, signed a lease agreement with the state to run the country's first privately owned railroad on publicly held land.

In 1982, VTR paid back the state for its purchase of trackage and began acquiring more sections from other companies and investing in much-needed track repair. Fifteen years later, Vermont Railway purchased Green Mountain Railroad and formed an umbrella company called Vermont Rail System, which consolidated those two and other short lines in Vermont and New York.

Vermont Rail System's primary cargo is freight, such as stone from quarries, fuel oil and slurry from the Omya mines north of Rutland. An Amtrak passenger train, the Ethan Allen Express, also uses the rail system's tracks from Rutland south. According to the company's website, Vermont Rail System operates on more than 350 miles of track, and 25,000 cars serve primarily Vermont businesses. Some of them fulfill various duties along the Burlington waterfront.

While the southern segment of the old Rutland Railroad still operates, the northern one seems to have been given up for good. The island line, which connects Burlington to North Hero, was never put back into use. That is, until local entities began to redevelop the area into a multiuse recreation trail.

Public interest in reclaiming the scenic line emerged almost from the moment the railroad abandoned it. In 1965, then-governor Philip H. Hoff commissioned a study called "A Champlain Pathway" that looked at potential avenues for developing the area.

The study made suggestions such as installing more picnic tables in Grand Isle State Park and establishing self-guided nature trails along the route. It advised against selling off land to private owners, so that the pathway could be preserved for hiking, biking and other activities.

The Champlain Pathway name didn't stick, but the concept did. Now called the Island Line Trail and enhanced with a seasonal bike ferry, the old railway is a 14-mile recreation trail that attracts more than 150,000 visitors a year, according to the website of Burlington biking advocacy group Local Motion. In 2010, the nonprofit Rails-to-Trails Conservancy inducted the Island Line Trail into its Hall of Fame.

Turning a disused rail line into a recreation path is a great idea, but, meanwhile, some of us are still waiting for the train. A passenger train, that is, that would whisk residents and visitors to points north or south of Burlington (other than special-occasion Burlington-to-Middlebury excursions). Union Station stands ready and waiting, much as those graffiti-covered freight cars await the spring and a higher purpose.