WTF: Should Vermonters Try to Deal With Rabid Wildlife Themselves? 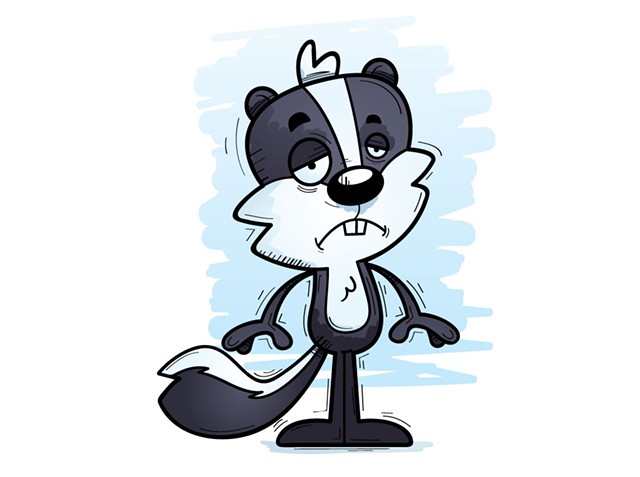 Last month, Michaela Grubbs of Charlotte discovered a skunk acting strangely in her front yard. By "acting strangely," she clarified, the animal was out during daylight hours, which seemed suspicious for a normally nocturnal creature.

"It was literally just sitting there," she recalled. "We thought it was dead."

Concerned that the skunk had rabies, Grubbs called the Shelburne Police Department to see if an animal control officer could respond. She was redirected to the Vermont State Police, where a dispatcher offered her some DIY advice: "He said, 'Just go ahead and shoot it.'"

A VSP spokesperson later confirmed that this was one of two options proffered, the other being to try calling another animal control officer.

Grubbs was stunned. She and her family had just moved to Vermont from Massachusetts earlier this year, and they don't own firearms. They have two school-age children, as well as a 4-month-old puppy that hasn't received all her rabies vaccine shots yet.

"He said they didn't send officers out unless it was a direct threat to a human," Grubbs added. "Like what, a bear?"

The dispatcher apparently assumed that: 1. all Vermonters own guns, and 2. everyone would be fine with spraying skunk stink and rabies-infected gray matter across the front lawn. Aside from that, doesn't the state have wildlife experts who handle this risky business?

Indeed it does, and those experts advise against snuffing out a sketchy skunk oneself. Why? Natalie Kwit, public health veterinarian with the Vermont Department of Health, pointed out that rabies is "nearly 100 percent fatal" in the mammals it can infect, including humans. That's why state law now requires that any bite of a human by a domestic or wild animal be reported to the health department or a town health officer within 24 hours and that health care providers notify the state of the use of "rabies post-exposure prophylaxis" (read: anti-rabies shots).

If the bite came from an unvaccinated domestic animal such as a cat, dog or ferret, the state requires that it be quarantined for a 10-day observation period. If the animal is still healthy after its extended time-out, Kwit explained, it couldn't have transmitted the rabies virus. If it becomes rabid, however, the animal must be euthanized immediately and its head shipped to the state laboratory for confirmation testing. One can only imagine what that mail room looks like.

If a human gets bitten or scratched by a wild animal, Kwit continued, every effort is made to catch, euthanize and test the animal for rabies; if they can't find it, the series of anti-rabies shots begins. Thankfully, human rabies is exceedingly rare in the United States; according to Kwit, Vermont has never had a single case reported.

Rabies in wildlife? That's another matter entirely. Last year, Vermont had at least 40 confirmed cases in nine of the state's 14 counties, including five rabid skunks. In fact, the U.S. Centers for Disease Control and Prevention report that those black-and-white stinkers are among the most common species to contract rabies, comprising about 25 percent of all wildlife rabies reports. They're just behind bats (31 percent) and raccoons (29 percent).

Last week, the health department began its annual airdrop of rabies vaccine in more than 110 Vermont communities in nine counties. The quarter-size, sweet-smelling blister packs aren't poisonous to humans or pets but should be left alone for wildlife to eat.

How does the casual observer know whether their neighborhood coyote, fox or Labradoodle is rabid? Contrary to popular portrayals in TV and film, Cujo won't necessarily foam at the mouth.

"You can't tell an animal is carrying rabies just by looking at it," Kwit said. "It could be acting normal for a time and then become ill."

Moreover, wildlife can contract other diseases that can resemble rabies, such as distemper in raccoons and mange in foxes. That said, any animal behaving aggressively toward a human or pet — without being provoked — is a cause for concern.

When in doubt, should the average Vermonter rub out a rabid raccoon or rodent?

"I personally wouldn't feel comfortable doing it myself," Kwit added, "[unless] it's posing a direct risk to you."

Col. Jason Batchelder, chief warden of the Vermont Fish & Wildlife Department's law enforcement division, said that the state police will dispatch his game wardens for that task. However, sometimes VSP dispatchers receive dozens of such calls, "so they have to pick and choose which ones to give to a busy warden, who may be covering 20 or 30 towns that day.

"If there's no human contact, it tends to be lower priority for us," Batchelder added — a possible explanation for the state police dispatcher's Charlotte brush-off. "If there is [human contact], we do everything we can to get there immediately and bring that animal in for testing."

But Batchelder also advised against DIY euthanasia, mostly because rabies is transmitted through exposure to infected saliva and brain tissue.

"I'm sure some people are perfectly capable, but I wouldn't want people taking that chance," he said. "If you're using a weapon such as a rifle or shotgun, there's a chance of splatter. If it gets into your eyes ... that infection can kill you."

If you must, however, Batchelder recommended donning gloves, protective eyewear and then triple-bagging the carcass in contractor bags — or heavy-duty plastic bags — before disposal in the trash. Burying it is not advised, because a pet or other animal might dig it up.

As for the Charlotte skunk, a rifle-wielding neighbor neutralized the threat, then doused the spot with chlorine bleach. Welcome to Vermont, Grubbs family!