WTF: Questions That Went by the Wayside 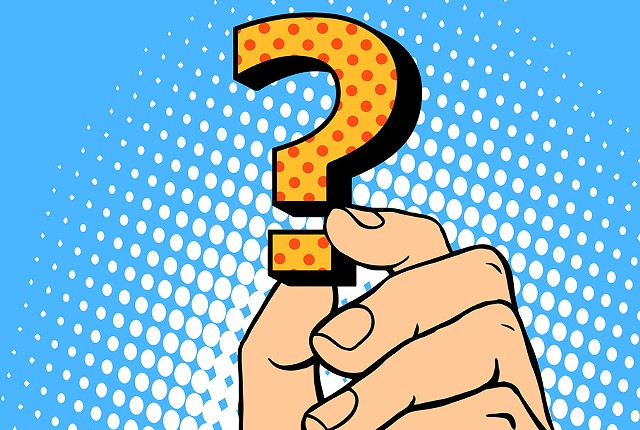 We get a lot of queries from inquiring minds, aka our readers, every year. This column runs every other week, so that gives us just 26 opportunities to answer them. (Or 25, given that we're squandering this one on not answering any.) Of course, we lean toward questions that have a retrievable answer — or an elusive one for which the search itself is entertaining. We generally ignore questions to which we have already responded.

Some queries we have no business answering. We are not, for example, able to offer a medical opinion on that weird rash, or to investigate your alleged food poisoning at a local salad bar. We shy away from questions of a religious or mystical nature.

That leaves the WTF questions that have us stumped, are more about opinion than fact, or to which there isn't necessarily a single right answer. In this last column of 2015, we thought we'd give you a sampling of them, conveniently grouped in two popular categories.

If anyone has a clue, do let us know. Meantime, Happy New Year, and keep your questions coming!

"WTF is up with [Garrett] Graff and his supposed run for lieutenant governor? From my seat, it sure looks like someone screwed the pooch big time in advising him about the run. Even with his familial roots in Vermont, he still comes off as an Ivy League, highfalutin, Beltway insider who wants to carpetbag his way into a major role in state government."

"What's up with the Lamoille Valley Ford guy who's always calling in his radio spots on what sounds like his cellphone? ... He might have the largest radio media buy in the state, but the audio on his ads always sounds like he's calling in from a third-world country."

"I am a native Vermonter (Brattleboro), and I lived in Burlington for 22 years. Upon moving to Burlington from Brattleboro in 1992, I immediately noticed a drop in the temperature friendliness-wise. I've had this conversation with others who have moved here both from in state and out, that people who live in Burlington seem quite cold and standoffish and cliquey.

"Over this last winter I moved to the Mad River Valley area, and the people here are very friendly. I don't think it's just a matter of small town versus large town, because I've talked to other people from large cities, and they feel the alienation upon moving here, too. I also don't think it's just native Vermonters or nonnative Vermonters acting this way. What gives? Is Burlington some sort of weird, unique insular part of the country?"

"Why hasn't the state closed Huntington Gorge to swimmers, now that so many people have died there? Seems to me the gorge more than meets the legal definition of 'attractive nuisance.'"

"The State of Vermont wants you to replace faded license plates because they are fading where the numbers are. But what I understand is, you have to pay them if the plate is not a special or low number and you prefer the same number! WTF? They messed up; why should we pay at all? It is their error. Make the paint supplier pick up the tab."

"I often hear neighbors, friends and Burlingtonians in general hemming and hawing about how unsafe it is to have a tree near their house — the thought being that if it fell on the house, it would hurt or possibly kill someone. Usually when someone is cutting down an otherwise healthy tree, 'safety' is the excuse they use. So, WTF, how many people have actually been killed by trees in Vermont? Or injured? More specifically, how many people have been killed or injured in their own homes by a tree?"

"A few years back, around 2010-11 when fuel and diesel prices spiked, my trash hauler added a 'fuel service charge' to my bill. At the time it made sense, as everyone could see that the cost of fuel was driven upward at a rapid pace, and trash hauling obviously uses lots of fuel. But since then, fuel prices (including diesel) have fallen to their lowest levels in a decade. Yet the 'fuel service charge' remains, and my trash hauler refuses to remove the add-on. WTF?"

"I live in Waterbury, and I fail to understand why it is necessary to have up to five or six sheriff patrol cars with lights on all day, sitting on their asses at different locations. The worst one is outside Shaw's supermarket. It feels like we as drivers are in kindergarten, and we have to be watched. What a waste. Thank you."

"What's up with the diamonds painted on the doors of lots of farm barns out in Jericho and Underhill?"

"How is it possible that Vermont only has one area code — our beloved 802? WTF? Are there any other states with just one area code? How do they determine how many area codes are needed in a state or area? And, perhaps most pressing: Will there ever come a day when Vermont has to add a new area code (gasp!)?"

More From the Road

"Right by Heritage Ford on Shelburne Road, there is a 40-miles-per-hour sign, followed by a sign about 10 yards away stating that traffic lights sync up at 30 miles per hour. What's up with that?"

"WTF is up with the white and purple Rombus 2000 bus seen around Essex? [It] has the Deathly Hallows symbol on the back and other Harry Potter references." [Note: The writer is presumably referring to Nimbus 2000, Harry's racing broomstick. We tried to track down this vehicle, to no avail.]

"Picture a four-way (or more) intersection where you are facing oncoming traffic. You might even have dedicated left- (and right-) hand turn lanes, but when the signal turns, you only have a green light, no arrows. But the traffic in the oncoming direction is being held by a red light! How are you to know, unless you are familiar with the intersection? Two prominent examples are the Main Street/Pearl Street intersection at Five Corners in Essex Junction and the Route 15/Towers Road intersection at Essex Center."

[From last winter] "Why does it seem that Interstate 89 and many of the roads in Vermont are often in such bad shape in the winter? WTF? Don't we know when it's gonna snow up here? I've heard tons of people say that when they cross the border into Vermont, on any number of roads, the conditions instantly get worse. I've noticed this myself."