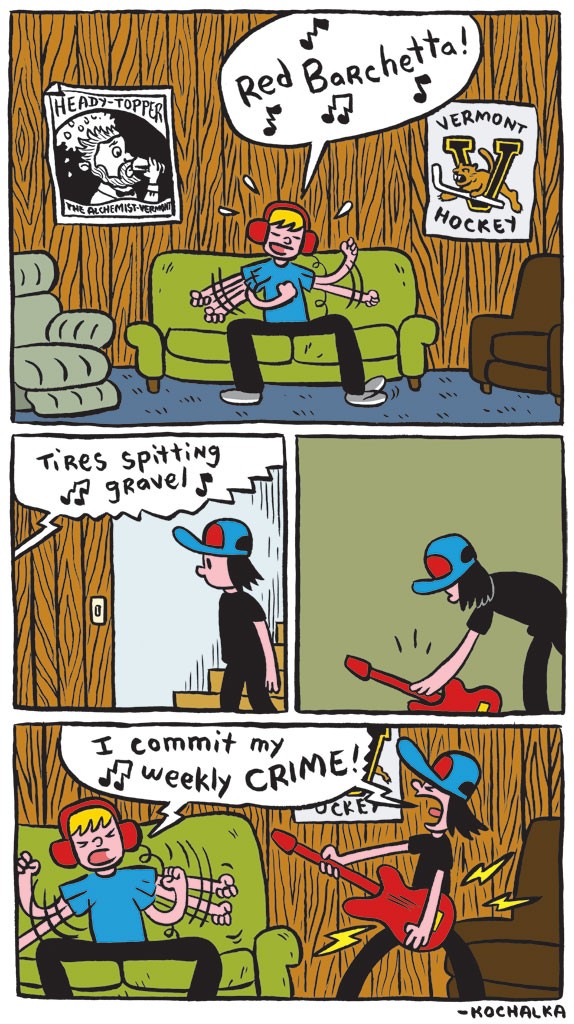 Is Mike Myers now a Vermonter?

If you've been hearing a subtle whirring sound around Burlington lately, it's likely the collective hum of the rumor mill. Local gossipmongers are all a-thrum and local Tweeters are all a-twitter about Mike Myers — he who Yeah, baby'd his rotten-toothed way into our hearts; he who invited us to touch his monkey. Is it true that he now resides in Vermont?

A number of unconfirmed sightings suggest that Myers has indeed purchased a home in the greater Burlington area — OK, Colchester. Though Seven Days' crack staff of paparazzi has yet to snap a pic of Myers enjoying a creemee, say, or attending a Lake Monsters game, our sources are reliable ones who are not, we're sure, pulling our legs.

We present (with apologies to S.J. Perelman) a fictionalized scenario that summarizes nearly everything we know about this vitally important local matter.

The scene: A wood-paneled, suburban basement outfitted with a thrift-store couch and two recliners that clash with both the couch and each other. Catamounts and Heady Topper posters share wall space with a dartboard and a framed hockey jersey. Gary, a young man wearing a pair of impressive headphones, "air drums" vigorously and sings off-key to Rush's "Red Barchetta."

Gary is rocking far too hard to notice the entrance, from a staircase at the rear of the room, of Wade, a young man in a black T-shirt and baseball cap. Wade picks up a nearby electric guitar and joins Gary in slaughtering this prog-pop staple.

Wade and Gary (singing): ...Run like the wind as excitement shivers up and down my spine!

Gary (doffing his headphones): Oh, hey, Wade, I didn't hear you come in! Thanks for the tasty licks!

Gary: A small primate sprouted wings and emerged, flying, from your anus?

Wade: What the hell are you talking about?

Gary: Nothing. What's up?

Wade: My sister's coworker's brother told her that Mike Myers just bought a house in Colchester for $1.65 million!

Wade: ...buy us some beer? That's exactly what I was thinking! Great minds, dude.

Gary: So how do we get in touch with him? We could definitely use some brews.

Wade: No problem. I got it all figured out. We just call his publicist and tell him that a local charity would like him to participate in a fundraiser.

Wade lays down a ferocious riff that Gary augments with an air-paradiddle.

Gary: How do we get in touch with this publicist? Also, what's a publicist?

Wade: It's, like, when a person gets really famous, they need other people to keep all the crazy people away. Like all those chicks who want to jump your bones.

Gary: Wow, I hope I never need a publicist.

Wade: Anyway, my sister got Mike Myers' publicist's number from the internet, and I have it right here, my friend.

Wade pulls from his pocket a cellphone and a crumpled piece of paper. He dials a number as Gary looks on admiringly.

Wade: All I need to do now is not seem like a crazy person. No problemo. (Into phone, in a "serious" voice) Uh, yes, hello. Ms. Trevinko? Yes, my name is Wade W. Wadesworth, and I'm the president of a charity in Burlington, Vermont, called Brews for Dudes.

Gary gives an enthusiastic thumbs up, accidentally skewering himself in his left nostril with said thumb.

Wade: We'd like to speak with your client, Mike Myers. We think he'd be a most excellent spokesman for our organization. This would be a really cool way for him to connect with his new neighbors here in the Burlington area. (pause)

What's that? Sure, he does. My sister's coworker's brother saw him buying, like, some frozen shrimp at City Market. He was wearing a big floppy hat, but he wasn't fooling anybody. My cousin even saw him on Church Street. It's all over Twitter, duh!

Anyway, you can consider me Mr. Myers' personal goodwill ambassador to Burlington. Now, if your client would simply consent to the purchase of, oh, a few hundred cases of beer, I'm sure that ... (pause) Hello? Crap.

Wade: She just said, "We don't comment on such matters regarding clients."

Gary: Does that mean he's not going to buy us any beer?

Gary: Damn. (pauses) Wait, do you know where he lives?

Gary: I've got it all figured out. Mike Myers is Canadian, right?

Gary: So that means he must love Rush! It's, like, a law in the Canadian constitution. You can get arrested there if you don't like Rush. So all we have to do is pack your amp and my kit into your car, drive to his house, and play Rush songs in his driveway until he agrees to buy us some beer!

Wade: Gary, you're a genius.

The two young men eagerly gather their gear and head up the stairs.

Gary: Todd Nevins told me that Mike Myers has a really hot sister.

Many of the facts in this story are true.